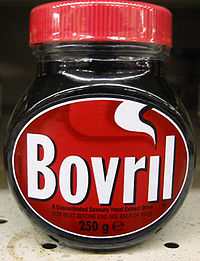 Bovril is the trademarked name of a thick, salty meat extract, developed in the 1870s by John Lawson Johnston and sold in a distinctive, bulbous jar. It is made in Burton upon Trent, Staffordshire, owned and distributed by Unilever UK.

Bovril can be made into a drink by diluting with hot water, or less commonly with milk.[1] It can also be used as a flavouring for soups, stews or porridge, or spread on bread, especially toast, rather like Marmite.

The first part of the product's name comes from Latin bos meaning "ox" or "cow." Johnston took the -vril suffix from Bulwer-Lytton's then-popular 1870 "lost race" novel The Coming Race, whose plot revolves around a superior race of people, the Vril-ya, who derive their powers from an electromagnetic substance named "Vril."[2][3] 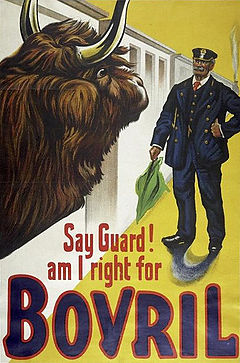 In 1870, in the war against the Prussians, Napoleon III ordered one million cans of beef to feed his starving troops. The task of providing all this beef went to a Scotsman named John Lawson Johnston. Large quantities of beef were available across the British Dominions and South America, but its transport and storage were problematic. Therefore Johnston created a product known as 'Johnston's Fluid Beef,' later called Bovril, to meet the needs of the French people and Napoleon III.[4] By 1888, over 3,000 British public houses, grocers and chemists were selling Bovril. In 1889, the Bovril Company was formed.

Bovril continued to function as a "war food" in World War I,[5] and was frequently mentioned in the 1930 account Not So Quiet... Stepdaughters of War by Helen Zenna Smith (Evadne Price). As a drink mixing the beef flavouring with hot water, it helped sustain ambulance drivers and men in trenches.

A thermos of beef tea was the favoured way to fend off the chill of winter matches for generations of Scottish and English football enthusiasts; to this day Bovril dissolved in hot water is sold in stadiums all over the United Kingdom. Bovril beef tea was the main warm drink that Ernest Shackleton's team had to drink when they were marooned on Elephant Island during the Endurance Expedition.[6]

Bovril's instant beef stock was launched in 1966 and its "King of Beef" range of instant flavours for stews, casseroles and gravy in 1971.

In 1971, Cavenham Foods acquired the Bovril Company but then sold most of its dairies and South American operations to finance further take-overs.[7] The brand is now owned by Unilever.[3]

Bovril holds the unusual position of having been advertised with a Pope. An advertising campaign of the early 20th century in Britain depicted the Pope seated on his throne, bearing a mug of Bovril. The campaign slogan read: The Two Infallible Powers - The Pope & Bovril.

Bovril is also produced in South Africa by the Bokomo division of Pioneer Foods[8] The product range includes a version with chili. The manufacturer also hoped to increase exports (Unilever UK & Ireland Export) to Asian countries such as Malaysia, a primarily Muslim country where the government was becoming restrictive regarding non-halal meat. By changing Bovril to a non-meat base, Unilever hoped to increase sales there, where people enjoy Bovril stirred into porridge.[citation needed]

The removal of beef from the recipe in 2004 was not without criticism, with many complaining that the new variant did not taste the same and had a different mouth feel.[citation needed] Beef extract was eventually reintroduced as a key Bovril ingredient in 2006, after the European Commission lifted its ban on the export of Britain's beef products; it was only at this point that the manufacturer stated explicitly that this had been the main reason for beef's removal.[citation needed]

During the Siege of Ladysmith in the Second Boer War, a Bovril-like paste was unofficially produced from horse meat within the garrison. Nicknamed Chevril (by replacing the Bov (ox) with Chev (horse) in the Bovril name) it was produced by boiling down horse meat or mules to a jelly paste and serving it as a beef tea.[9][10]

In November 2004, the manufacturers, Unilever, announced that the composition of Bovril was being changed from beef extract to a yeast extract, claiming it was to make the product suitable for vegetarians and vegans; at that time fear of bovine spongiform encephalopathy (BSE) may have been a factor. According to Unilever, "in blind taste tests, 10% didn't notice any difference in taste, 40% preferred the original and 50% preferred the new product."[citation needed] It now once again makes Bovril using beef extract and a chicken variety using chicken extract,[11] although the vegetarian formula is still sold in some countries, such as Australia and Hong Kong.

Bovril was famously advertised as a potential aid to slimming in the 1980s via an ad campaign featuring actress and model Jerry Hall, using the slogan "Are you a Bovril body?"[citation needed]

Bovril is served at the Groucho Club and is associated with football culture, being commonly drunk on the terraces from thermos flasks in winter. At Scottish football stadiums, containers such as thermos flasks are banned by law,[12] so Bovril is purchased inside the grounds where it is served in polystyrene or plastic cups. Some Bovril lovers (as seen at football matches) like to shake white pepper and a little cayenne into the drink. Burton Albion have named their home end after Bovril due to the sponsorships between club and company.[citation needed]

On the February 20, 2011, episode of Top Gear, James May had Bovril in an urn inside a Claas Dominator combine harvester in Norway, which was converted into a snow plow. Expressing its necessity on the British way of life as he knows it, he stated on the program, "We all know that when it's snowing and it's cold you have Bovril. That's a rule of life."[13]

In Roald Dahl's book Matilda, the title character would read books while drinking hot chocolate, but occasionally she would make Bovril or Ovaltine.

Posters advertising Bovril can be seen in the 1964 motion picture "My Fair Lady", at the end of the musical number "I'm getting married in the morning".