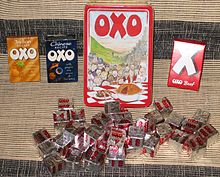 In the UK, until May 2001, Oxo was owned by Van den Bergh Foods (part of Unilever), when along with the Batchelors soup brand (based in Ashford, Kent) it was sold to the Campbell Soup Company to allow Unilever to buy Bestfoods. Campbells UK was subsequently acquired by Premier Foods in 2006.

The best known flavour of stock cube is the original beef cube, but now, in addition to beef, Oxo produces chicken and other flavour cubes, e.g. Chinese Recipe and Indian Recipe. The cubes are broken up and used as flavouring in meals or gravy or dissolved into boiling water.

Concentrated meat extract was invented by Justus von Liebig around 1840 and commercialized by Liebig's Extract of Meat Company starting in 1866. The original product was a viscous liquid containing only meat extract and 4% salt.

In 1899, the company introduced the trademark Oxo for a cheaper version; the origin of the name is unknown, but presumably comes from the word ox. In 1908, Oxo sponsored the London Olympic Games (despite claims by Coca Cola to being the 'first' commercial sponsor of the Games) and supplied athletes with Oxo drinks to fortify them. The first Oxo cubes were produced in 1910 and further increased Oxo's popularity as the cubes were cheaper than the liquid. During the first half of the 20th century, Oxo was promoted through issues of recipes, gifts and sponsorships before fading into the background as a part of the fabric of English life in the latter parts of the century. For the beginning of the 21st century a new image was promoted with modern television advertising and sensibilities. In 1966, Oxo had a sponsored show on the Offshore Radio station Wonderful Radio London. The show was presented by Tony Windsor and his assistant was a woman called Katie. In this show they had a daily receipe.

One of Oxo's best-remembered advertising campaigns was launched in the UK in 1983, when "The Oxo Family" debuted on commercial television. The campaigns made household names of Michael Redfern (the father) and Lynda Bellingham (the mother), while the children were played by Blair McKihan, Colin McCoy and Alison Reynolds. The adverts typically featured the family sitting down to a meal at which Oxo gravy would be served. The product was not always mentioned by name, occasionally appearing only as a logo in the corner of the screen at the end of the commercial. Throughout the 1980s and 1990s the family were seen to grow older, and when the campaign was retired in 1999 the family moved out of the house.

In the UK, Oxo was a brand of the Campbell Soup Company, until April 2006, when the UK arm of Campbells Soup was sold to Premier Foods. Premier Foods bought all the UK operations of the company, including sites at both Worksop and Kings Lynn. It is the Worksop plant that produces OXO cubes.

In South Africa, Oxo is now a brand of Mars, Incorporated. However, the only product marketed under the Oxo brand in South Africa is a yeast extract based spread. The product also contains a lesser portion of beef extract, giving it a slightly 'beefier' taste than other yeast extracts.