Ovaltine is a brand of milk flavoring product made with malt extract (except the blue packaging in the US), sugar (except in Switzerland), cocoa, and whey. Ovaltine, a registered trademark of Associated British Foods, is made by Wander AG, a subsidiary of Twinings which acquired the brand from Novartis in 2003, except in the United States, where Nestlé acquired the rights separately from Novartis later on. 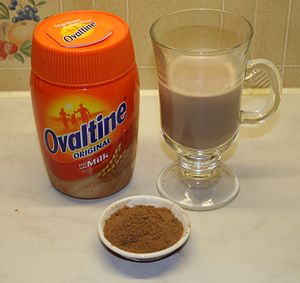 A jar of Ovaltine from the UK (2006), a mug of ovaltine made with hot milk and a tablespoon of the powder.

Ovaltine was developed in Berne, Switzerland, where it is known by its original name, Ovomaltine (from ovum, Latin for "egg", and malt, originally its main ingredients). Soon after invention the factory moved out to the village of Neuenegg a few kilometres west of Berne, where it is still produced.

Ovomaltine was exported to Britain in 1909; it was a misspelling in the trademark registration that led to the name being shortened to Ovaltine in English-speaking markets. A factory was built in Kings Langley which exported to the United States as well. By 1915 Ovaltine was being manufactured in Villa Park, Illinois, for the US market. Originally advertised as consisting solely of "malt, milk, eggs, flavored with cocoa", the formulation has changed over the decades, and today several formulations are sold in different parts of the world. In the US, after purchasing the US rights, Nestlé changed the formulation bringing its flavor profile very close to that of another Nestlé chocolate milk flavoring product, Nesquik.

The popular chocolate malt version is a powder which is mixed with hot or cold milk as a beverage. Malt Ovaltine (a version without cocoa) and Rich Chocolate Ovaltine (a version without malt) are also available in some markets. Ovaltine has also been available in the form of chocolate bars, chocolate Easter eggs, parfait, cookies, and breakfast cereals, where it is only the brand name that connects the cereals with the chocolate drink.

Ovaltine also manufactured PDQ Chocolate Flavor Beads, PDQ Choco Chips and Egg Nog Flavored PDQ, which are no longer available. These drink mixes were very popular from the 1960s to the 1980s. Ovaltine discontinued the PDQ products about 1995 or 1996.

The US children's radio series Little Orphan Annie (1931–1940) and Captain Midnight (1938–1949), and the subsequent Captain Midnight TV series (1954–1956), were sponsored by Ovaltine. They had promotions in which listeners could save proofs-of-purchase from Ovaltine jars to obtain radio premiums, like "secret decoder ring" badges or pins that could be used to decode messages in the program. Children from the time may remember that "Ovaltine" is an anagram for "Vital One". Villa Park, Illinois, was home to the Ovaltine factory until the company's purchase and withdrawal in 1988. The Villa Park Historical Society maintains a permanent exhibit of Ovaltine advertising and memorabilia. The old factory was converted to loft apartments keeping the original floors and wall exposed.

A radio program aimed at five- to fourteen-year-olds, The League of Ovaltineys, was broadcast to Great Britain by Radio Luxembourg on Sunday evenings at 5:30 PM. Beginning in 1934, it was broadcast until 1940 and the German occupation of Luxembourg and again after World War II ended into the 1950s. Like the US programme, listeners could obtain badges, pins, and secret codes. The Ovaltineys' advertising jingle was regarded as one of the most successful jingles of the era.[1]

In Hong Kong, Ovaltine, like Horlicks, is known as a café drink. It is served at cha chaan tengs as well as fast-food shops such as Café de Coral and Maxim's Express. It is served hot, or on ice as a cold drink. In Hong Kong the powder is sold without sugar, to be sweetened to taste by the consumer. In Brazil it is commonly mixed with vanilla ice cream. In the Asian market, it is a chocolate ice cream flavored with Ovaltine powder. The Ovomaltine brand is highly recognizable in Switzerland, and the brand is associated with skiing and snowboarding.

Ovaltine was also very popular in Britain, and was manufactured at Kings Langley in Hertfordshire using a process that included GEA Wiegand falling film evaporators to concentrate liquid malt extract which was then dried under vacuum in steam heated band dryers. The Arts and Crafts style Ovaltine factory in Kings Langley is a well-known local landmark. Production ceased in 2002 and the factory has now been redeveloped as luxury apartments. Near the factory was a health farm run by the Ovaltine works which was set up as a model farm and a health resort for disadvantaged children, which operated through to the 1960s. Later the farm land was sold off and is now largely occupied by the M25 motorway. The Ovaltine Egg Farm is now the site of Renewable Energy Systems Ltd. and the site of the first wind turbine visible from the M25.

In October 2002 the food and drinks division of Novartis, the maker of Ovaltine, was bought by Associated British Foods. ABF currently produces Ovaltine in Switzerland, China, Thailand and the Philippines. In the United States Nestlé manufactures Ovaltine, using a trade dress in cursive writing instead of print.

In Malaysia, Ovaltine has lost its popularity to Nestlé Milo. Ovaltine is sold in tetra packs for cold serving and widely available in shops and supermarkets, yet it has a low profile compared to similar beverages in the market. In Japan, Ovaltine was sold for a short period in the late 1970s by Calpis Industries (presently Calpis Co., Ltd.), but it was not a commercial success. In Australia, Ovalteenies are sold as round tablets of compressed Ovaltine, eaten as a candy.

Brazilian fast food chain Bob's, the largest competitor to McDonald's, offers both milkshakes and sundaes made with Ovomaltine, which became a flagship product of the fast-food chain in Brazil.

In 1947, Harry Gibson's song "Who Put the Benzedrine in Mrs. Murphy's Ovaltine" was popular on the radio. Ovaltine is mentioned in at least three songs from Broadway shows - "Marry the Man Today" from Guys and Dolls, "You're the Top" from Anything Goes, and "Go Into Your Trance" from High Spirits. ("You need no drinks, you need no smokes, you need no aspirin in your Cokes -- No benzedrine in your Ovaltine -- Just go, go, go into your trance.")

One of the segments of A Christmas Story has Ralphie anxiously decoding the secret message on the Little Orphan Annie radio program, only to discover it's no more than an encouragement to drink Ovaltine.

Ovaltine is mentioned in the intentionally nostalgic song "Do You Remember These?" by the Statler Brothers. ("Dancin' close, little moron jokes, and cooties in her hair Captain Midnight, Ovaltine and The Whip at the County Fair...")

Ovaltine was mentioned by the British crime fiction writer Patricia Wentworth in several of her novels about Miss Silver. The beverage is usually taken by heroines before they go to sleep.

Ovaltine was also mentioned in the 1972 Hindi film Bawarchi.

Ovaltine was mentioned in the book After by Amy Efaw.

Ovaltine was mentioned in the autobiographical book Miles To Go by Miley Cyrus, where she narrates that her dad has given her Ovaltine since she was a little girl. (Miles To Go, pages 126-127)

Ovaltine is mentioned in "Words of Wizzum", a song sung by the fictional band "Everclean" in the 2004 movie Sons of Provo.

Ovaltine is mentioned a few times in Seinfeld, in the episodes "The Fatigues", "The Butter Shave" and "The Secret Code".

In the "Jose Chung's From Outer Space" episode of The X-Files, a mirrored Ovaltine sign can be read on the outer side of the window in a cafe where Agent Mulder talked to pilot Jack Schafer (or, as diner cook claimed, where Mulder simply had eaten sweet potato pie).

In the webcomic "Shlock Mercenary" one of the protagonists, an amorphic blob named Shlock, favours a product called "Genuine Imitation Ovalkwik" which has a chocolate taste and seems to be a reference to Ovaltine and Nesquick. This is reflected by the striking similarities between the Nesquick logo and the Ovalkwik logo.

In the RiffTrax version of Star Wars Episode III: Revenge of the Sith, Bill Corbett imitates the opening crawl by saying, "Meanwhile, Vice Chancellor Ugga Bugga and Darth Buttcrack are rendezvousing on the planet Ovaltine . . ."