A cha chaan teng (lit.: Chinese tea diner) means tea diner, also called Chinese diner, is commonly found in Hong Kong, China, and Taiwan, known for its Chinese food, eclectic and affordable menus, which include many dishes from Hong Kong cuisine and Hong Kong-style Western cuisine. Cha chaan tengs are also popular in Macau. Since the 1980s they can also be found in the Chinatown districts of many Western countries like Australia, Canada, United Kingdom and United States.

Cha chaan teng establishments provide tea (usually weak tea) called "clear tea" (清茶 cing1 caa4), to customers as soon as they are seated. Some patrons use the hot tea to wash their utensils. The name, literally "tea restaurant", serves to distinguish itself from Western restaurants that provide water to customers instead of tea. The "tea" in the name refers to the inexpensive black tea, not the traditional Chinese tea served in traditional dim sum restaurants and teahouses (茶樓 caa4 lau4). Moreover, some cha chaan tengs prefer the use of the word "café" in their names.

The "tea" may also refer to tea drinks, such as the Hong Kong-style milk tea and cold lemon tea, which are very popular in cha chaan tengs. The older generations in Hong Kong use yum sai cha (飲西茶 lit. "drinking Western tea"), when dining in these restaurants in contrast with yum cha. 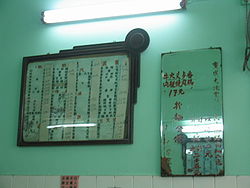 Two menus, one on the board and another on glass, in a bing sut in Sheung Shui. No rice plates can be seen on the menus. 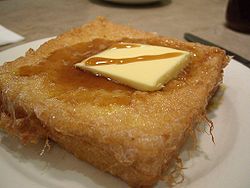 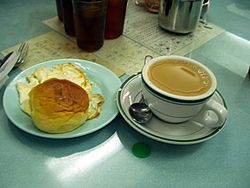 A typical breakfast, eggs and a bun, including a cup of silk-sock milk tea 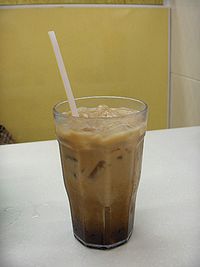 Cha chaan teng serves a wide range of food, from steak to wonton noodles to curry to sandwiches, eg Hong Kong-style French toast.[1] Both fast food and à-la-carte dishes are available. A big cha chaan teng often consists of three cooking places: a "water bar" (水吧) which makes drinks, toast/sandwiches and instant noodles, a "noodle stall" which prepares Chiuchow-style noodles (including wonton noodles), and a kitchen for producing rice plates and other more expensive dishes. The invention of drinks like yuanyang (鴛鴦), Iced tea with Lemon (凍檸茶) and Coca-Cola with Lemon (檸樂) are often credited culturally to this style of restaurant.

A feature of cha chaan tengs are the set meals. There are various sets throughout the day for breakfast, lunch, afternoon tea and dinner. The lunch and dinner sets usually include a soup and a drink. Generally there is an additional HK$2 charge for cold drinks. Sometimes an additional HK$1 is charged for toasted bread.

In the old days, these eateries only sold different types of "ice", sandwiches and pasta but no rice plates. However, some of the restaurants bearing these titles today ignore the tradition, and provide all kinds of rice plates and even wonton noodles. Original chaan suts, bing suts and bing tengs, which can be regarded as the prototype of cha chaan tengs, are now scarce in Hong Kong.