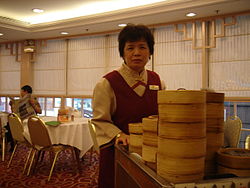 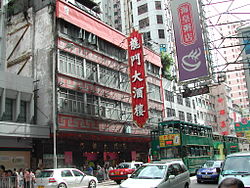 Lung Mun, an old-styled restaurant in Wan Chai, Hong Kong, has since then been closed and demolished.

In the US and UK, the phrase dim sum is often used in place of yum cha; in Cantonese, dim sum (點心) refers to the wide range of small dishes, whereas yum cha, or "drinking tea", refers to the entire meal.

Similarly to a Western morning or afternoon tea, despite the name, yum cha is focussed as much on the food items served with the tea as the tea itself. These food items are collectively known as "dim sum", a varied range of small dishes which may constitute or replace breakfast, brunch or afternoon tea. Dishes are usually steamed or fried and may be savoury or sweet. They include steamed buns such as char siu baau, assorted dumplings, siu mai, and rice noodle rolls, which contain a range of ingredients, including beef, chicken, pork, prawns and vegetarian options. Typical desserts include egg tarts, sai mai lo (tapioca pudding) and mango pudding. Many yum cha restaurants also offer plates of steamed green vegetables, roasted meats, congee porridge, and soups.

Dim sum can be cooked by steaming and frying, among other methods. The dim sum are usually small and normally served as three or four pieces in one dish. It is customary to share dishes among all diners on the same table. Because of the small portions people can try a wide variety of food.

Traditionally, the cost of the meal was calculated based on the number and size of dishes left on the patron's table at the end. In modern yum cha restaurants, dim sum servers sometimes mark orders by stamping a card on the table. Servers in some restaurants even use different stamps so that sales statistics for each server can be recorded. 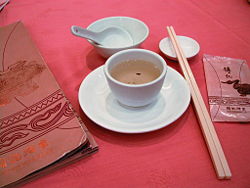 Methods of tea-tasting have undergone considerable changes since the Tang Dynasty and the use of covered teabowls is one development of note. The simple yet practical design of covered teabowls makes them an excellent utensil for tea-tasting. The fine painting on these bowls also enhances their aesthetic value. Nowadays a small teacup is used instead in most dim sum restaurants.

Chopsticks, a pair of small even-length tapered sticks, are the traditional eating utensils used to yum cha. Chopsticks are commonly made of plastic in the Chinese restaurants. Held between the thumb and fingers of the working hand they are used as tongs to pick up portions of food or to sweep rice and small particles of food into the mouth from the bowl. Dim sum dishes are served in small portions and therefore convenient for eating with chopsticks. Many rules of etiquette govern the proper use of the chopsticks.

Toothpicks are frequently used between courses, as it is believed that the aftertaste of one course should not be allowed to ruin one's enjoyment of the next course. Toothpicks are ideal and socially acceptable for picking up those meal items which often defy the best chopstick approach, such as slippery button mushrooms and jellyfish slices served with sesame oil. 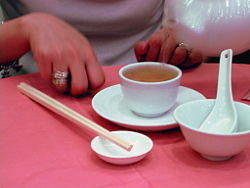 A tea-drinker tapping the table with her fingers to show gratitude to the member of the party who has filled her cup. 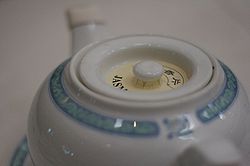 Teapot lids should be left open or ajar to signal for refills.

It is customary to pour tea for others before filling one's own tea cup. It is most gracious to be the first to pour tea.

When tea drinkers tap the table with two (occasionally one) fingers of the same hand, an action known as finger kowtow, it is an expression of gratitude to the member of the party who filled their cups. According to a just-so story, this gesture recreates a tale of Imperial obeisance and can be traced to the Qianlong Emperor, a Qing Dynasty emperor who used to travel incognito. While visiting South China, he once went into a teahouse with his companions. In order to maintain his anonymity, he took his turn at pouring tea. His stunned companions wanted to kowtow for the great honour but to do so would have revealed the identity of the emperor. Finally, one of them tapped three fingers on the table (One finger representing their bowed head and the other two representing their prostrate arms) and the clever emperor understood what he meant. From then on, this has been the practice.