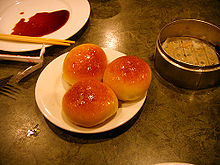 Baked cha siu bao. The dough for this type is different from the steamed version

Cha siu bao or char siu bao is a Cantonese barbecue-pork-filled bun (baozi).[1] The buns are filled with barbecue-flavored cha siu pork.[1] They are served as a type of dim sum during yum cha and are sometimes sold in Chinese bakeries.[1]

There are two major kinds of cha siu bao: steamed (蒸, zing1) and baked (焗, guk6). Steamed cha siu bao has a white exterior, while its baked counterpart is browned and glazed.

Encased in the center of the bun is tender, sweet, slow-roasted pork tenderloin. This cha siu is diced, and then mixed into a syrupy mixture of oyster sauce, hoisin sauce, roasted sesame seed oil, rice vinegar, shaoxing wine or dry sherry, soy sauce, sugar and cornstarch.[4]

In Hawaiian pidgin, the item is called Manapua. The word does not mean "chewed-up" (mana) "pork" (puaʻa), as its spelling suggests. Rather, the current form is a shortening of meaʻono-puaʻa, meaning "pork cake" (meaʻono meaning "cake").[citation needed] In the U.S. mainland, the Chinese term is commonly used. The Chinese brought this dim sum item with them when they were brought over as plantation workers.

This food usually consists of a white bun with a dark pink-colored diced pork filling. The Hawaiian version of the cha siu bao tends to be larger than its Chinese cousin and can be either steamed or baked. The red pork filling's dark pink color comes from marinating the pork with a very small amount of saltpeter prior to slow roasting. The bun is occasionally baked, but more frequently steamed when it is made. Manapua has come to mean any meat-filled or bean-paste-filled bun made with the same dough as described above including locally created versions with hot dogs, curry chicken, kalua pig, and even ube (purple yam), which is a popular vegetarian version of the manapua. In Hawaii, freshly prepared or prepackaged frozen manapua may be found in dedicated bakeries, restaurants, and chain convenience stores.