A bāozi or simply known as bao, bau, humbow, nunu, bausak, pow or pau is a type of steamed, filled bun or bread-like (i.e. made with yeast) item in various Chinese cuisines, as there is much variation as to the fillings and the preparations. In its bun-like aspect it is very similar to the traditional Chinese mantou. It can be filled with meat and/or vegetarian fillings.

Two types are found in most parts of China: Dabao, measuring about 10 cm across, served individually, and usually purchased for take-away. The other type, xiaobao, measure approximately 3 cm wide, and are most commonly eaten in restaurants. Each order consists of a steamer containing about 10 pieces. A small ceramic dish is provided for vinegar or soy sauce, both of which are available in bottles at the table, along with chilli paste.

According to legend, they were invented by the scholar and military strategist Zhuge Liang (3rd century AD).[1]

In many Chinese cultures, these buns are a popular food, and widely available. While they can be eaten at any meal, bao are often eaten for breakfast. Due to the long history of Chinese immigrants in Malaysia, the Malays have adopted these buns as their own. A particularly Malay form of the baozi (called pau in Malay) is filled with potato curry, chicken curry or beef curry that are similar to the fillings of Malay curry puffs. Some variants have a quail egg in the middle, in addition to the curry. Due to the Muslim beliefs of Malays, these buns are usually halal. You can find Malay stalls selling the buns by the roadside, at pasar malams (night markets), highway rest stops and pasar Ramadans (Ramadan food bazaars). 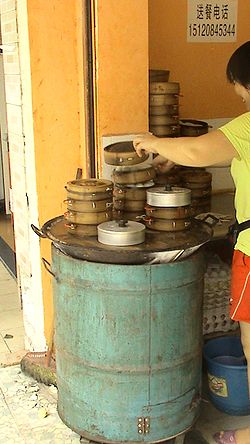 Bao and jiao on a steam barrel, a common sight throughout China