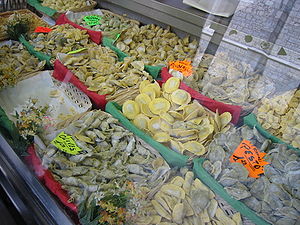 Different types of ravioli and other filled pasta

Ravioli (plural; singular: raviolo) are a traditional type of Italian filled pasta. They are composed of a filling sealed between two layers of thin egg pasta dough and are served either in broth or with a pasta sauce. The word ravioli is reminiscent of the Italian verb riavvolgere ("to wrap"), though the two words are not etymologically connected.[citation needed] The word may also be a diminutive of Italian dialectal rava, or turnip.

The earliest mention of ravioli appear in the writings of Francesco di Marco, a merchant of Venice in the 14th century.[1] In Venice, the mid-14th century manuscript Libro per cuoco offers ravioli of green herbs blanched and minced, mixed with beaten egg and fresh cheese, simmered in broth, a recipe that would be familiar today save for its medieval powdering of "sweet and strong spices".[2] In Tuscany, some of the earliest mentions of the dish come from the personal letters of Francesco di Marco Datini, a merchant of Prato in the 14th century. In Rome, ravioli were already well-known when Bartolomeo Scappi served them with boiled chicken to the papal conclave of 1549.[3] Ravioli were already known in 14th century England, appearing in the Anglo-Norman vellum manuscript Forme of Cury under the name of rauioles.[4][5] Sicilian ravioli and Malta's ravjul may thus be older than North Italian ones. Maltese ravjul are stuffed with rikotta, the locally produced sheep's-milk ricotta, or with gbejna, the traditional fresh sheep's-milk cheese. 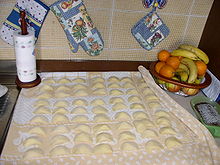 Preparation of home-made ravioli with ricotta

Today, ravioli are made in worldwide industrial lines supplied by Italian companies such as Arienti & Cattaneo, Ima, Ostoni, and Zamboni. "Fresh" packed ravioli usually have seven weeks of shelf life. Canned ravioli was pioneered by Chef Boyardee. This type of ravioli is filled with either beef or processed cheese and served in a tomato, tomato-meat, or tomato-cheese sauce. Canned ravioli has more in common with other canned pastas than with traditional ravioli dishes. Its roots are in traditional American "red sauce" Italian-American restaurants opened by Italian immigrants in New York and other cities. Toasted ravioli are ravioli that have been breaded and deep fried, and are a popular appetizer or snack food.

In India, a popular dish called Gujiya is similar to ravioli however its prepared sweet, with a filing of dry fruits, sugar and a mixture of sweet spices, then deep fried in vegetable oil. The dish is a popular food prepared during the Holi festival, mainly in the northern, northwestern and central parts of India.

Similar dishes in other cultures include the Chinese jiaozi or wonton; in fact, ravioli and tortellini are sometimes collectively referred to as "Italian jiaozi" (意大利饺子) or "Italian wonton" (意大利馄饨). A similar dish called shishbarak contains pasta filled with minced beef meat and cooked in hot yogurt.