For the Nicaraguan dictator(s), see Somoza

A samosa is a stuffed pastry and a popular snack in the Indian Subcontinent, Southeast Asia, Central Asia and Southwest Asia, the Arabian Peninsula, the Mediterranean, the Horn of Africa, North Africa and South Africa. It generally consists of a fried or baked triangular, semilunar or tetrahedral pastry shell with a savory filling, which may include spiced potatoes, onions, peas, coriander, and lentils, or ground lamb or chicken. The size and shape of a samosa, as well as the consistency of the pastry used, can vary considerably, although it is mostly triangular. Samosas are often served with chutney[citation needed] generally as an appetizer. Given the popularity of Indian cuisine, samosas are widely available in Indian restaurants and snack-bars in Europe, North America, Asia and Africa.

The word "samosa" can be traced to the Persian سنبوساگ sanbosag.[1] The pastry name in other countries also derives from this root, such as the crescent-shaped sanbusak or sanbusaj in Arab countries, sambosa in Afghanistan, samosa in India, samboosa in Tajikistan, samsa by Turkic-speaking nations, sambusa in parts of Iran and chamuça in Goa, Mozambique and Portugal.[1] While they are currently referred to as sambusak in the Arabic-speaking world, Medieval Arabic recipe books sometimes spell it sambusaj.[2]

The samosa has been a popular snack in the Indian Subcontinent for centuries. It is believed that it originated in Central Asia (where they are known as samsa[3]) prior to the 10th century.[4] Abolfazl Beyhaqi (995-1077), an Iranian historian has mentioned it in his history, Tarikh-e Beyhaghi.[5] It was introduced to the Indian subcontinent in the 13th or 14th century by traders from the region.[1]

Ibn Battuta, the 14th century traveller and explorer, describes a meal at the court of Muhammad bin Tughluq where the samushak or sambusak, a small pie stuffed with minced meat, almonds, pistachio, walnuts and spices, was served before the third course, of pulao.[7][8]

The Ain-i-Akbari, a 16th century Mughal document, mentions the recipe for 'Qutab', which it says, “the people of Hindustan call sanbúsah”.[9]

The samosa was brought to India, where it is so famous, by Muslim traders and soldiers. Small, crisp, mince-filled samosas were easy to make around campfires during night halts, then conveniently packed into saddle bags as snacks for the next day’s journey.

Different regions which have inherited the dish have significantly different ways of preparing it. 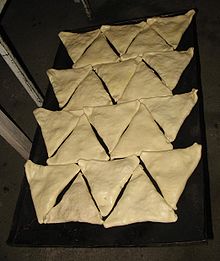 Filled and cut samosa ready to be baked in Karakol, Kyrgyzstan

In Kazakhstan and Kyrgyzstan, samosas are almost always baked and never fried. The dough can be a simple bread dough, or a layered pastry dough. The most common filling for traditional samosa is lamb and onions, but beef, chicken, and cheese varieties are also quite common from street vendors. Samosas with other fillings, such as potato or pumpkin (usually only when in season), can also be found. 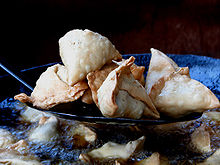 Samosas being fried at a road-side vendor in India.

The North Indian and Pakistani samosa contains a maida flour shell stuffed with some filling. The filling in general is a mixture of mashed boiled potato, onion, green peas, spices and green chili;[10] however, meat-stuffed samosas are very common and popular in Pakistan. The entire pastry is then deep fried to a golden brown colour, in vegetable oil. It is served hot and is often eaten with fresh Indian chutney, such as mint, coriander or tamarind. It can also be prepared as a sweet form, rather than as a savory one. Samosas are often served in chaat, along with the traditional accompaniments of yogurt, chutney, chopped onions and coriander, and chaat masala.

Burmese-style samusa are flat and triangular, and usually smaller than their Indian counterparts.

In South India, samosas are slightly different, in that they are folded in a different way more like Portuguese chamuças, with a different style pastry. The filling also differs, typically featuring mashed potatoes with spices, fried onions, peas, carrots, cabbage, curry leaves, green chillies, etc.. It is mostly eaten without chutney. Samomas in South India come in different sizes, and fillings are greatly influenced by the local food habits. Samosas made with spiced mashed potato mixture are quite popular in the South Indian states of Andhra Pradesh, Karnataka and Tamil Nadu.

In Pakistan, the Faisalabadi samosas are very well known. They are unusually large, topped with a red and white chutney with a side portion of onion salad. The filling is usually mixed vegetable; however, the meat version also remains very popular. Another version, popular in eastern Punjab, consists of samosas with side dishes of mashed, spiced chickpeas, onion and coriander salad, as well as various chutneys to top the samosas.

They are called samusa in Burmese, and are an extremely popular snack in Burma.

In Hyderabad, Andhra Pradesh, India, a smaller version of the samosa with a thicker pastry crust and mince-meat filling referred to as lukhmi is consumed, as is another variation with onion fillings.

The local equivalent of samosas in Indonesia are known as pastel, usually filled with eggs, ground beef or chicken. 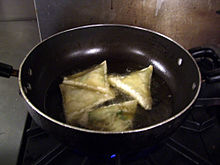 Samosas are a staple of local cuisine in the Horn of Africa, particularly in Somalia, Eritrea and Ethiopia, where they are known as sambusa. While they can be eaten any time of the year, they are usually reserved for special occasions, such as Ramadan, Christmas or Meskel.

In the Middle East, a sambusak is often semicircular and filled with minced meat and onions, spinach, feta or halloumi cheese, or minced chicken. In Israel, a sambusak is usually filled with mashed chickpeas. It is associated with Sephardic Jewish cuisine and considered an Iraqi dish.[11] 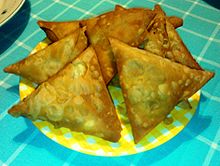 In Goa and Portugal, samosas are known as chamuças, usually filled with chicken, beef, pork, or vegetables and generally are quite hot. They are an integral part of Goan cuisine and Portuguese cuisine.

While samosas are traditionally fried, many Westerners prefer to bake them, as this is more convenient and healthier. Variations using phyllo[15] or flour tortillas[16] are sometimes used.