Halloumi (Greek χαλούμι, Turkish hellim, Arabic حلوم ḥallūm) is a traditional Cypriot cheese[1][2][3] that is also popular in Sweden (2nd biggest consumers of the cheese in the world after Cyprus) and the rest of the Middle East[4] and Greece,[5] and is now produced in many countries and regions around the world. It is made from a mixture of goats' and sheep milk, although some halloumi can be bought that also contains cows' milk.[6] It has a high melting point and so can easily be fried or grilled. Halloumi is set with rennet and is unusual in that no acid or acid-producing bacterium is used in its preparation.[7] 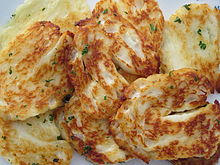 Halloumi cheese originated in Cyprus[4] and was initially made during the Medieval Byzantine period,[8] subsequently gaining popularity throughout the rest of the Middle East region.

The cheese is white, with a distinctive layered texture, similar to mozzarella and has a salty flavour. It is stored in its natural juices with salt-water and can keep for up to a year if frozen below −18 °C (0 °F) and defrosted to +4 °C (39 °F) for sale. It is often garnished with mint to add to the taste. Traditionally, the mint leaves were used as a preservative, this practice arising from the serendipitous discovery that Halloumi kept better and was fresher and more flavourful when wrapped with mint leaves. In accordance with this tradition, many packages of halloumi contain fragments of mint leaves on the surface of the cheese. 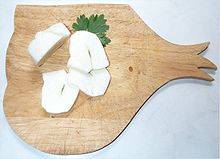 The cheese is much used in cooking and can be fried until brown without melting, owing to its higher-than-normal melting point. This makes it an excellent cheese for frying or grilling (e.g. in saganaki) or fried and served with vegetables, as an ingredient in salads. Cypriots like eating halloumi with watermelon in the warm months, and as halloumi and lountza - a combination of halloumi cheese and either a slice of smoked pork, or a soft lamb sausage.[citation needed]

The resistance to melting comes from the fresh curd being heated before being shaped and placed in brine.[9] Traditional halloumi is a semicircular shape, about the size of a large wallet, weighing 220-270 g. The fat content is approximately 25% wet weight, 47% dry weight with about 17% protein. Its firm texture when cooked causes it to squeak on the teeth when being chewed.

Traditional halloumi is made from unpasteurised sheep and goats milk. Many people also like halloumi that has been aged; kept in its own brine, it is much drier, much stronger and much saltier. This cheese is very different from the milder halloumi that Western chefs use as an ingredient.

Although it is made worldwide and is of rather disputed origin due to the mixed cultures in the Levant and East Mediterranean, halloumi is currently registered as a protected Cypriot product within the US (since the 1990s) but not the EU. The delay in registering the name halloumi with the EU has been largely due to a conflict between dairy producers and sheep and goat farmers as to whether registered halloumi will contain cow’s milk or not and if so, at what ratios with sheep and goat’s milk.[10][11] If it is registered as a PDO (Protected designation of origin) it will receive similar status as 600 or so other agricultural products such as feta and parmesan cheese.

Egyptian hâlûm is eaten fresh or brined and spiced, which is called mishsh.

The word halloumi comes from ancient Egyptian via the Coptic ialom.[12]

100 g of commercially produced packaged halloumi has a typical composition of:[13]