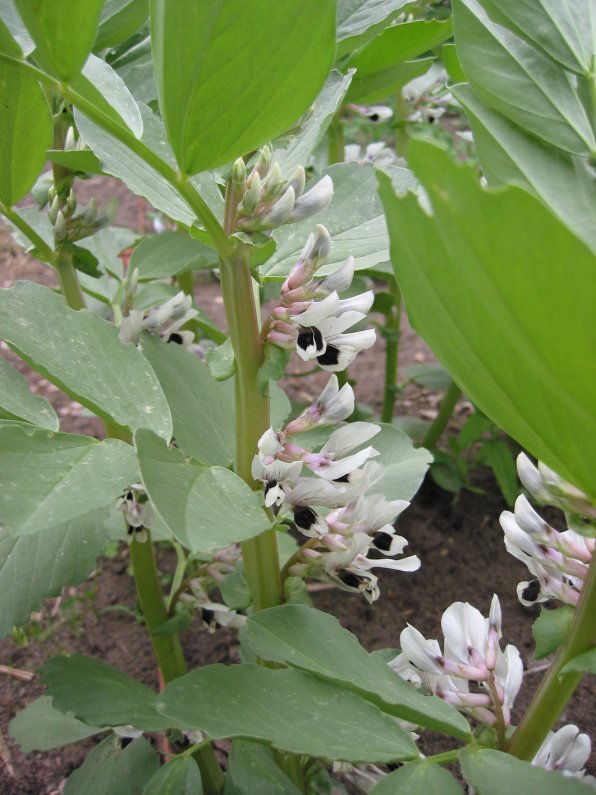 "Vicia faba", the broad bean, fava bean, faba bean, horse bean, field bean, tic bean is a species of bean () native to north and southwest , and extensively cultivated elsewhere. Although usually classified in the same genus "" as the vetches, some botanists treat it in a separate monotypic genus as "Faba sativa" Moench.

It is a rigid, erect plant 0.5-1.7 m tall, with stout stems with a square cross-section. The leaves are 10-25 cm long, pinnate with 2-7 leaflets, and of a distinct glaucous grey-green color; unlike most other vetches, the leaves do not have tendrils for climbing over other vegetation. The s are 1-2.5 cm long, with five petals, the standard petal white, the wing petals white with a black spot (true black, not deep purple or blue as is the case in many "black" colorings [http://chla.library.cornell.edu/cgi/t/text/pageviewer-idx?sid=75ed643231a8cab76743747215fd6ab6&idno=2731628&c=chla&cc=chla&q1=Cheiranthus&seq=51&view=image] ), and the keel petals white. The is a broad leathery pod, green maturing blackish-brown, with a densely downy surface; in the wild species, the pods are 5-10 cm long and 1 cm diameter, but many modern s developed for food use have pods 15-25 cm long and 2-3 cm thick. Each pod contains 3-8 s; round to oval and 5-10 mm diameter in the wild plant, usually flattened and up to 20-25 mm long, 15 mm broad and 5-10 mm thick in food cultivars. Vicia faba has a diploid (2n) chromosome number of 12, meaning that each cell in the plant has 12 chromosomes (6 homologous pairs). Five pairs are acrocentric chromosomes and 1 pair is metacentric.

Broad beans have a long tradition of cultivation in , being among the most ancient plants in cultivation and also among the easiest to grow. It is believed that along with s, , and s, they became part of the eastern diet in around or earlier. They are still often grown as a to prevent because they can over-winter and because as a , they fix in the soil. These commonly cultivated plants can be attacked by fungal diseases, such as Rust ("") and Chocolate Spot ("").

In much of the world, the name broad bean is used for the large-seeded cultivars grown for human food, while horse bean and field bean refer to cultivars with smaller, harder seeds (more like the wild species) used for animal feed, though their stronger flavour is preferred in some human food recipes, such as . The term fava bean (from the Italian "fava", meaning "broad bean") is its most common name in the United States, with "broad bean" being the most common name in the UK.

The Broad Beans need around 6ml of water a day to grow at an optimal rate.

Broad beans are eaten while still young and tender, enabling harvesting to begin as early as the middle of spring for plants started under glass or over-wintered in a protected location, but even the maincrop sown in early spring will be ready from mid to late summer. Horse beans, left to mature fully, are usually harvested in the late autumn.

The beans can be fried, causing the skin to split open, and then salted and/or spiced to produce a savory crunchy snack. These are popular in China, Peru (habas saladas), Mexico "(habas con chile)" and in Thailand (where their name means "open-mouth nut").

In the of , broad beans are combined with s and to produce a spicy fermented bean paste called "".

In most Arab countries the fava bean is used for a breakfast meal called . Ful medames is usually crushed fava beans in a sauce although the Fava beans do not have to be crushed.

Fava beans are the most common fast food in the Egyptian diet, eaten by rich and poor alike. Egyptians eat fava beans in various ways: they may be shelled and then dried, bought dried and then cooked by adding water in very low heat for several hours, etc. But the most popular way of preparing fava beans in Egypt is by taking the cooked beans and adding oil, garlic, lemon, salt and to it. It is then eaten with bread. Traditionally, Egyptians eat onions with it, in the famous dish which is called "".

Broad beans are rich in , and thus should be avoided by those taking monoamine oxidase (MAO) inhibitors.

Broad beans are rich in L-dopa, a substance used medically in the treatment of . L-dopa is also a natriuretic agent, which might help in controlling . [Vered Y, Grosskopf I, Palevitch D, Harsat A, Charach G, Weintraub MS, Graff E. The influence of Vicia faba (broad bean) seedlings on urinary sodium excretion. "Planta Med" 1997;63:237-40. PMID 9225606.] Some also use fava beans as a natural alternative to drugs like , citing a link between L-dopa production and the human .Fact|date=March 2008Broad beans are widely cultivated in district Kech and Panjgur of Balochistan Province of Pakistan and eastern province of Iran. In Balochi language, they are called Bakalaink, and Baqala in Persian. The elders generally restrict the young children from eating them raw (when unmatured) because they can cause constipation and -like symptoms.Fact|date=July 2008

Areas of origin of the bean correspond to malarial areas. There are suggestions that the anaemia resulting from favism acts as protection from malaria, because certain species of malarial protozoa cannot prosper in blood lacking in iron.

* In ancient and , beans were used in voting; a white bean being used to cast a "yes" vote, and a black bean for "no".
* In Ubykh culture, throwing beans on the ground and interpreting the pattern in which they fall was a common method of (), and the word for "bean-thrower" in that language has become a generic term for seers and soothsayers in general.
* In , broad beans are traditionally sown on , . Small cakes made in the shape of broad beans (though not of them) are known as "fave dei morti" or "beans of the dead". According to tradition, once experienced a failure of all crops other than the beans; the beans kept the population from starvation, and thanks were given to . Broad beans subsequently became traditional on altars in many Italian communities. Some people carry a broad bean for good ; some believe that if one carries a broad bean, one will never be without the essentials of life. In , on the first of May Roman families traditionally eat fresh fava beans with cheese during a daily excursion in the Campagna.
* In a Christmas Cake called is baked with a "Fava" bean inside.
* In ancient and , beans were used as a food for the dead, such as during the annual Lemuria festival. In some folk legends, such as in and the common story, magical beans grow tall enough to bring the hero to the clouds. The collected a story in which a bean splits its sides laughing at the failure of others. Dreaming of a bean is sometimes said to be a sign of impending conflict, though others said that they caused bad dreams. Pliny claimed that they acted as a . European folklore also claims that planting beans on or during the night brings good luck.

* The name and modern term derives from this bean.
* In the 1992 videogame , an broad bean character is featured on billboards and the start of the game called "Broad Bean," a parody of (the Michelin man), presumably the mascot of the fictional company sponsoring the race, Sam Spree.
* In the film "The Silence of the Lambs", mentions that he once ate the liver of a census taker "with some fava beans and a nice ."