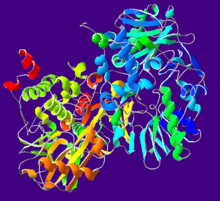 Monoamine oxidase inhibitors (MAOIs) are a class of antidepressant drugs prescribed for the treatment of depression. They are particularly effective in treating atypical depression.

Because of potentially lethal dietary and drug interactions, monoamine oxidase inhibitors have historically been reserved as a last line of treatment, used only when other classes of antidepressant drugs (for example selective serotonin reuptake inhibitors and tricyclic antidepressants) have failed.[1] However, a transdermal patch form of the MAOI selegiline, called Emsam, was approved for use by the Food and Drug Administration in the United States on February 28, 2006.[2]

In the past, MAOIs were prescribed for those resistant to tricyclic antidepressant therapy,[citation needed] but newer reversible MAOIs such as selegiline and moclobemide provide a safer alternative[3] and are now sometimes used as first-line therapy, although these substances are not always as effective as their predecessors.

MAOI's have been found to be effective in the treatment of panic disorder with agoraphobia, social phobia, atypical depression or mixed anxiety and depression, bulimia, posttraumatic stress disorder as well as borderline personality disorder. There are reports of MAOI efficacy in obsessive-compulsive disorder (OCD), trichotillomania, dysmorphophobia and avoidant personality disorder; however these reports are from uncontrolled case reports.[3]

MAOIs appear to be particularly indicated for out- patients with "neurotic depression" complicated by panic disorder or hysteroid dysphoria, which involves repeated episodes of depressed mood in response to feeling rejected.[4]

MAOIs act by inhibiting the activity of monoamine oxidase, thus preventing the breakdown of monoamine neurotransmitters and thereby increasing their availability. There are two isoforms of monoamine oxidase, MAO-A and MAO-B. MAO-A preferentially deaminates serotonin, melatonin, epinephrine and norepinephrine. MAO-B preferentially deaminates phenylethylamine and trace amines. Dopamine is equally deaminated by both types. Many formulations have forms of fluoride attached to assist in permeating the blood-brain barrier, which is suspected as a factor in pineal gland effects.

The early MAOIs inhibited monoamine oxidase irreversibly. When they react with monoamine oxidase, they permanently deactivate it, and the enzyme cannot function until it has been replaced by the body, which can take about two weeks. A few newer MAOIs, notably moclobemide, are reversible, meaning that they are able to detach from the enzyme to facilitate usual catabolism of the substrate. The level of inhibition in this way is governed by the concentrations of the substrate and the MAOI.

Harmaline found in Peganum harmala, as well as the Ayahuasca vine, Banisteriopsis caapi and tobacco is a reversible inhibitor of MAO-A (RIMA).[5]

In addition to reversibility, MAOIs differ by their selectivity of the MAO receptor. Some MAOIs inhibit both MAO-A and MAO-B equally, other MAOIs have been developed to target one over the other.

MAO-A inhibition reduces the breakdown of primarily serotonin, epinephrine, and norepinephrine and thus has a higher risk of serotonin syndrome and/or a hypertensive crisis. Tyramine is broken down by MAO-A (and MAO-B), therefore inhibiting its action may result in excessive build-up of it, so diet must be monitored for tyramine intake.

MAO-B inhibition reduces the breakdown mainly of dopamine and phenethylamine so there are no dietary restrictions associated with this. MAO-B would also metabolize tyramine, as the only differences dopamine, phenethylamine, and tyramine are two phenylhydroxyl groups on carbons 3 and 4. The 4-OH would not be a steric hindrance to MAO-B on tyramine.[6] Two MAO-Bi drugs, selegiline and rasagiline have been approved by the FDA without dietary restrictions, except in high dosage treatment where they lose their selectivity.[2][7]

When ingested orally, MAOIs inhibit the catabolism of dietary amines. When foods containing tyramine are consumed (so-called "cheese effect"), the individual may suffer from hypertensive crisis. If foods containing tryptophan are consumed, hyperserotonemia may result. The amount required to cause a reaction varies greatly from individual to individual, and depends on the degree of inhibition, which in turn depends on dosage and selectivity.

Tyrosine is the precursor to catecholamines, not tyramine. Tyramine is a breakdown product of tyrosine. In the gut and during fermentation tyrosine, an amino acid, is decarboxylated to tyramine. Ordinarily, tyramine is deaminated in the liver to an inactive metabolite, but when the hepatic MAO (primarily MAO-A) is inhibited, the "first-pass" clearance of tyramine is blocked and circulating tyramine levels can climb. Elevated tyramine competes with tyrosine for transport across the blood-brain barrier (via aromatic amino acid transport) where it can then enter adrenergic nerve terminals. Once in the cytoplasmic space, tyramine will be transported via the vesicular monoamine transporter (VMAT) into synaptic vesicles thereby displacing norepinephrine. The mass transfer of norepinephrine from its vesicular storage space into the extracellular space via mass action can precipitate the hypertensive crisis. Hypertensive crises can sometimes result in stroke or cardiac arrhythmia if not treated. This risk is generally not present with RIMAs. Both kinds of intestinal MAO inhibition can cause hyperpyrexia, nausea, and psychosis if foods high in levodopa are consumed.

Examples of foods and drinks with potentially high levels of tyramine include liver and fermented substances, such as alcoholic beverages and aged cheeses.[10] (See a list of foods containing tyramine). Examples of levodopa-containing foods include broad beans. These diet restrictions are not necessary for those taking selective MAO-B inhibitors, unless these are being taken in high dosages, as mentioned above.

It deserves separate mention that some meat extracts and yeast extracts (Bovril, Marmite, Vegemite) contain extremely high levels of tyramine, and should not be used with these medications.

When MAOIs were first introduced, these risks were not known, and over the following four decades, fewer than 100 people have died from hypertensive crisis.[citation needed] Presumably due to the sudden onset and violent appearance of the reaction, MAOIs gained a reputation for being so dangerous that, for a while, they were taken off the market in America entirely. It is now known that, used as directed under the care of a qualified psychiatrist, this class of drugs remains a safe alternative for intermediate- to long-term use.

The most significant risk associated with the use of MAOIs, is the potential for interactions with over-the-counter and prescription medicines, illicit drugs or medications, and some supplements (e.g. St. John's Wort). It is vital that a doctor supervise such combinations to avoid adverse reactions. For this reason, many users carry an MAOI-card, which lets emergency medical personnel know what drugs to avoid. (E.g. adrenaline dosage should be reduced by 75%, and duration is extended.)[10] The risk of MAOI medications interacting with other drugs or certain foods is particularly dangerous because those on the medication who would have to restrict their diets often are depressed patients who "don't care if they live or die."[11]

MAOIs should not be combined with other psychoactive substances (antidepressants, painkillers, stimulants, both legal and illegal etc.) except under expert care. Certain combinations can cause lethal reactions, common examples including SSRIs, tricyclics, MDMA, meperidine,[12] tramadol, and dextromethorphan[citation needed]. Agents with actions on epinephrine, norepinephrine or dopamine must be administered at much lower doses due to potentiation and prolonged effect.

Nicotine, a substance frequently implicated in tobacco addiction, is not significantly addictive when administered alone.[13] The addictive potential manifests itself after co-administration of an MAOI, which specifically causes sensitization of the locomotor response in rats, a measure of addictive potential.[14] This may be reflected in the difficulty of smoking cessation, as tobacco contains a naturally-occurring MAOI in addition to the nicotine.

Antidepressants including MAOIs have some dependence producing effects, most notably a withdrawal syndrome[clarification needed], which may be severe especially if MAOIs are discontinued abruptly or over-rapidly. However, the dependence producing potential of MAOIs or antidepressants in general is not as significant as benzodiazepines. For example, antidepressants have significantly less abuse potential than benzodiazepines. Withdrawal symptoms can be managed by a gradual reduction in dosage over a period of weeks or months to minimize or prevent withdrawal symptoms.[15]

MAOIs, as with any antidepressant medications, do not alter the course of the disorder, so it is possible that discontinuation can return the patient to the pre-treatment state.[16]

This consideration greatly complicates switching a patient between a MAOI and a SSRI, because it is necessary to clear the system completely of one drug before starting another. If one also tapers dosage gradually, the result is that for weeks a depressed patient will have to bear the depression without chemical help during the drug-free interval. This may be preferable to risking the effects of an interaction between the two drugs, but it is often not easy[citation needed].

The MAOIs are infamous for their numerous drug interactions. Unless the interaction is desired, any drug that falls within the following classifications should be avoided:

It is recommended by the FDA to contact a physician or pharmacist before taking any drug while on an MAOI.

Various tryptamine and phenethylamine/amphetamine derivatives such as αET, αMT, amphetamine (itself), methamphetamine, MDMA, 4-MTA, PMA, 2C-T-7, and 2C-T-21 may also have weak to strong MAOI effects at high doses. Many other unlisted hydrazines like hydrazine (itself), monomethylhydrazine, and phenylhydrazine have some MAOI properties as well.