Tranylcypromine (Parnate, Jatrosom) is a drug of the substituted phenethylamine and amphetamine classes which acts as a monoamine oxidase inhibitor (MAOI)—it is a non-selective and irreversible inhibitor of the enzyme monoamine oxidase (MAO).[1][2] It is used as an antidepressant and anxiolytic agent in the clinical treatment of mood and anxiety disorders, respectively.

Tranylcypromine was originally developed as an analogue of amphetamine.[1] Although it was first synthesized in 1948,[3] its MAOI action was not discovered until 1959. Precisely because tranylcypromine was not, like isoniazid and iproniazid, a hydrazine derivative, its clinical interest increased enormously, as it was thought that it might have a more acceptable therapeutic index than previous MAOIs.[4]

The drug was introduced by Smith, Kline & French in the United Kingdom in 1960 and approval in the United States soon followed in 1961.[5] It was withdrawn from the market in February 1964 due to a number of patient deaths involving hypertensive crises with intracranial bleeding. However, it was reintroduced later that year with more limited indications and specific warnings of the risks.[6]

Despite their well-established efficacy, indications for monoamine oxidase inhibitors are currently very limited, due to their significant potential for adverse effects, many interactions, and the availability of newer and safer (although not necessarily more efficacious) antidepressants.[2] Tranylcypromine is indicated primarily for the treatment of major depressive disorder, and can also be used in the management of various mood and anxiety disorders, typically as a last resort after conventional antidepressants have been tried without success.

Therapeutic contraindications of tranylcypromine include:

Foods high in endogenous monoamine precursors or exogenous monoamine compounds may cause adverse reactions. The most common example of this, is the hypertensive crisis caused by the ingestion of tyramine, which is found in foods like aged cheeses, cured meats, tofu and certain red wines. Some, such as yeast extracts, contain enough tyramine to be potentially fatal in a single serving. Spoiled food is also likely to contain dangerous levels of tyramine.

Tranylcypromine is typically considered to have fewer side effects than the hydrazines, such as phenelzine (Nardil).

At least one case of the abuse of tranylcypromine has been noted. Sequelae included the periodic elimination of REM sleep and substantially elevated nocturnal muscle tone. Attempts to discontinue the medication resulted in nightmares accompanied by prompt and grossly excessive nocturnal REM sleep, and narcolepsy.[14]

Symptoms of tranylcypromine overdose are generally more intense manifestations of its usual effects. They may include exacerbated anxiety, muscle tremors, tachycardia, hypertension or hypotension, and hyperthermia, among others. Rare cases have been reported of hypertensive crisis, serotonin syndrome, myoclonus, hyperpyrexia, psychosis, and delirium, some of which progressed to coma. Additionally, in sensitive individuals or at extreme dosages, hypotension may lead to shock. 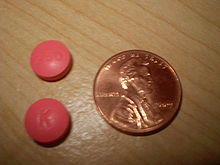 As a result of these actions, tranylcypromine considerably boosts the concentrations and activity of the monoamine neurotransmitters serotonin and dopamine, along with paradoxical and varying effects on norepinephrine and epinephrine. It increases the levels of the trace amines phenethylamine, tyramine, octopamine, and tryptamine as well. It is believed to be tranylcypromine's action on these neurochemicals that is responsible for its therapeutic efficacy.

Several methods of chemical synthesis for tranylcypromine are known.