Adamantane is a colorless, crystalline chemical compound with a camphor-like odor. With a formula C10H16, it is a cycloalkane and also the simplest diamondoid. Adamantane molecules consist of three cyclohexane rings arranged in the "armchair" configuration. It is unique in that it is both rigid and virtually stress-free. Adamantane is the most stable among all the isomers with formula C10H16, which include the somewhat similar twistane. The spatial arrangement of carbon atoms is the same in adamantane molecule and in the diamond crystal. This motivates the name adamantane, which is derived from the Greek adamantinos (relating to steel or diamond).[4]

The discovery of adamantane in petroleum in 1933 launched a new chemistry field studying the synthesis and properties of polyhedral organic compounds. Adamantane derivatives have found practical application as drugs, polymeric materials and thermally stable lubricants.

The possibility of the existence of a hydrocarbon with the C10H16 formula and diamond-like structure of the molecule was suggested by H. Decker at a conference in 1924. Dekker called this molecule decaterpene and was surprised that it had not been synthesized yet.[5]

The first attempt of laboratory synthesis was made by German chemist Hans Meerwein in 1924 using reaction of formaldehyde with diethyl malonate in the presence of piperidine. Instead of adamantane, Meerwein obtained 1,3,5,7-tetracarbomethoxybicyclo[3.3.1]nonane-2,6-dione. This compound was later named Meerwein's ester and used in the syntheses of adamantane and its derivatives.[6] Later, another German chemist D. Bottger tried to obtain adamantane using Meerwein's ester as precursor. However, the product, tricyclo-[3.3.1.13,7] decane ring system, was again an adamantane derivative.[7]

Other researchers attempted to synthesize adamantane using phloroglucinol and derivatives of cyclohexanone but also without success.[8]

Adamantane was first synthesized by Vladimir Prelog in 1941 from Meerwein's ester.[9][10] The process was impractical as it contained five stages (simplified in the image below) and had a yield of about 0.16%. However, it was sometimes used to synthesize certain derivatives of adamantane.[8] 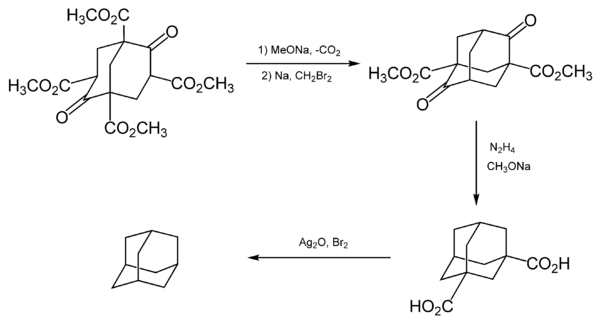 Prelog's method was refined in 1956. The decarboxylation yield was increased by the addition of the Heinsdecker pathway (11%), and the Hoffman reaction (24%) that raised the total yield to 6.5%.[11][12] The process was still too complex, and a more convenient method was accidentally found by Paul von Ragué Schleyer in 1957: dicyclopentadiene was first hydrogenated in the presence of a catalyst (e.g. platinum dioxide) and then transformed into adamantane using a Lewis acid (e.g. aluminium chloride) as another catalyst. This method increased the yield to 30–40% and provided an affordable source of adamantane; it therefore stimulated characterization of adamantane and is still used in the laboratory practice.[13][14] The adamantane synthesis yield was later increased to 60%[15] and nowadays, adamantane is an affordable chemical compound with a cost of the order $1/gram.

All the above methods yield adamantane in the form of polycrystalline powder. Using this powder, single crystals can be grown from the melt, solution or vapor phase (e.g. with the Bridgman–Stockbarger technique). Melt growth result in the worst crystalline quality with a mosaic spread in the X-ray reflection of about 1°. Best crystals are obtained from the liquid phase, but the growth is inpracticably slow – several months for a 5–10 mm crystal. Growth from the vapor phase is a reasonable compromise in terms of speed and quality.[2] Adamantane is sublimated in a quartz tube placed in a furnace, which is equipped with several heaters maintaining a certain temperature gradient (about 10 °C/cm for adamantane) along the tube. Crystallization starts at one end of the tube which is kept near the freezing point of adamantane. Slow cooling of the tube, while maintaining the temperature gradient, gradually shifts the melting zone (rate ~2 mm/hour) producing a single-crystal boule.[16]

Before adamantane was synthesized, it was isolated from petroleum by Czech chemists S. Landa and V. Machacek in 1933. They used fractional distillation where a sample of petroleum was gradually heated until leaving only solid impurities. The resulting steam enters a fractional distillation column. The temperature of the column decreases as the steam rises through the column. Therefore, hydrocarbon fractions condense along the column corresponding to their boiling point. Landa and Machacek could produce only a few milligrams of adamantane but noticed its high boiling and melting points. Because of the (assumed) similarity of its structure to that of diamond, the new compound was named adamantane.[8][17]

Petroleum remains the only natural source of adamantane; the content varies between 0.0001 and 0.03% depending on the oil field and is too low for commercial production.[18][19]

Beside adamantane, petroleum contains more than thirty of its derivatives.[18] Their isolation from a complex mixture of hydrocarbons is possible due to their high melting point and the ability to distill with water vapor and form stable adducts with thiourea.

Pure adamantane is a colorless crystalline solid with a characteristic camphor smell. It is practically insoluble in water, but readily soluble in nonpolar organic solvents.[20] Adamantane has an unusually high melting point for a hydrocarbon. At 270 °C, its melting point is much higher than other hydrocarbons with the same molecular weight, such as camphene (45 °C), limonene (–74 °C), ocimene (50 °C), terpinene (60 °C) or twistane (164 °C), or than a linear C10H22 hydrocarbon decane (–28 °C). However, adamantane slowly sublimates even at room temperature.[21] Adamantane can distill with water vapor.[19] 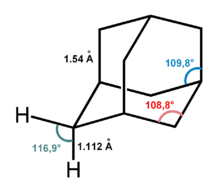 Adamantane molecule consists of three condensed cyclohexane rings fused in the chair conformation. The molecular parameters were deduced by electron diffraction and X-ray crystallography. The carbon-carbon bond length is 1.54 Å and is almost identical to that of diamond, and the carbon-hydrogen distance is 1.112 Å.[3]

At ambient conditions, adamantane crystallizes in a face-centered cubic structure (space group Fm3m, a = 9.426 ± 0.008 Å, four molecules in the unit cell) containing orientationally disordered adamantane molecules. This structure transforms into an ordered body-centered tetragonal phase (a = 6.641 Å, c = 8.875 Å) with two molecules per cell either upon cooling to 208 K or pressurizing to above 0.5 GPa.[8][21]

This phase transition is of the first order; it is accompanied by an anomaly in the heat capacity, elastic and other properties. In particular, whereas adamantane molecules freely rotate in the cubic phase, they are frozen in the tetragonal one; the density increases stepwise from 1.08 to 1.18 g/cm3 and the entropy changes by a significant amount of 1594 J/(mol·K).[2]

Elastic constants of adamantane were measured using large (centimeter sized) single crystals and the ultrasonic echo technique. The principal value of the elasticity tensor, C11, was deduced as 7.52, 8.20 and 6.17 GPa for the <110>, <111> and <100> crystalline directions.[16] For comparison, the corresponding values for crystalline diamond are 1161, 1174 and 1123 GPa.[22] The arrangement of carbon atoms is the same in adamantane and diamond.[23] However, in the adamantane solid, molecules do not form a covalent lattice as in diamond, but interact through weak Van der Waals forces. As a result, adamantane crystals are very soft and plastic.[2][16][24]

The nuclear magnetic resonance (NMR) spectrum of adamantane consists of two poorly resolved signals, which correspond to the inequivalent sites 1 and 2 (see picture below). Their positions are 1.873 ppm and 1.756 ppm for adamantane in CDCl3 and 1H NMR, and are 28.46 ppm and 37.85 ppm for 13C NMR.[25] The simplicity of the NMR spectrum is a good monitor of the purity of adamantane – most derivatives have lower molecular symmetry and therefore more complex spectra.

The infrared absorption spectrum of adamantane is relatively simple because of the high symmetry of the molecule. The main absorption bands and their assignment are given in the table.[3]

If adamantane molecules have four different substituents at every nodal carbon site then they are chiral and optically active. As in biphenyls, the center of chirality does not belong to any particular carbon atom.[26] Such optical activity was described in adamantane in 1969 with the four different substituents being hydrogen, bromine and methyl and carboxyl group. The values of specific rotation are small and are usually within 1°.[27][28]

According to the rules of systematic nomenclature, adamantane should be called tricyclo[3.3.1.13,7]decane. However, IUPAC recommends using the name "adamantane".[1]

The closest structural analogs of adamantane are noradamantane and homoadamantane, which respectively contain one less and one more CH2 link than the adamantane.

Usually, hydrocarbons which contain only σ-bonds are relatively inert chemically. However, adamantane and its derivatives are highly reactive. This property is particularly evident in the ionic reactions where carbocations are formed as intermediates.

The adamantane cation can be produced by reacting 1-fluoro-adamantane with SbF5 and it has high stability compared with other tertiary carbocations.[29][30]

The dication of adamantane was obtained in solutions of superacids. It also has elevated stability due to the phenomenon called "three-dimensional aromaticity".[31]

The carbonyl group of adamantanone allows further reactions via the bridging site. For example, adamantanone is the starting compound for obtaining such derivatives of adamantane as 2-adamantanecarbonitrile[33] and 2-methyl-adamantane.[34]

Adamantane readily reacts with various reagents brominating compounds such as molecular bromine. The composition and the ratio of the reaction products depend on the reaction conditions and especially presence of catalyst s.[18]

Boiling of adamantane with bromine results in a monosubstituted adamantane, 1-bromadamantane. Multiple substitution with bromine is achieved by adding a Lewis acid catalyst.[35]

The rate of bromination is accelerated upon addition of Lewis acids and is unchanged by irradiation or addition of free radicals. This indicates that the reaction occurs via an ionic mechanism.[8]

Carboxylation of adamantane was first reported in 1960, using formic acid as a carboxylating agent and carbon tetrachloride as a solvent.[39]

The simplest adamantane alcohol, 1-hydroxyadamantane, is readily formed by hydrolysis of 1-bromadamantane in aqueous solution of acetone. It can also be produced by ozonation of the adamantane:[41]

Adamantane interacts with benzene in the presence of Lewis acids, resulting in a Friedel–Crafts reaction.[42] Aromatically substituted adamantane derivatives can be easily obtained starting from 1-hydroxyadamantane. In particular, the reaction with anisole proceeds under normal conditions and does not require a catalyst.[35]

Nitration of adamantane is a difficult reaction characterized by moderate yields.[43] An important nitrogen-substituted drug amantadine can be prepared by reacting adamantane with bromine or nitric acid to give the bromide or nitroester at the 1- position. Reaction of either compound with acetonitrile affords the acetamide, which is hydrolyzed to give 1-adamantylamine:[44]

Adamantane itself enjoys few applications since it is merely an unfunctionalized hydrocarbon. It is used in some dry etching masks[45] and polymer formulations.

In solid-state NMR spectroscopy, adamantane is a common standard for chemical shift referencing.[46] In dye lasers, adamantane may be used to extend the life of the gain medium; it cannot be photoionized under atmosphere because its absorption bands lie in the vacuum-ultraviolet region of the spectrum. Photoionization energies have been determined for adamantane as well as for several bigger diamondoids.[47]

All medical applications known so far involve not pure adamantane, but its derivatives. The first adamantane derivative used as a drug was amantadine – first (1967) as an antiviral drug against various strains of flu[48] and then to treat the Parkinson's disease.[49][50] Other drugs among adamantane derivatives include memantine, rimantadine, dopamantin, tromantadine, vildagliptin and karmantadin. Polymers of adamantane have been patented as antiviral agents against HIV.[51]

Some alkyl derivatives of adamantane have been used as a working fluid in hydraulic systems.[52] Adamantane-based polymers might find application for coatings of touchscreens,[53] and there are prospects for using adamantane and its homologues in nanotechnology. For example, the soft cage-like structure of adamantane solid allow incorporation of guest molecules, which can be released inside the human body upon breaking the matrix.[15][54]