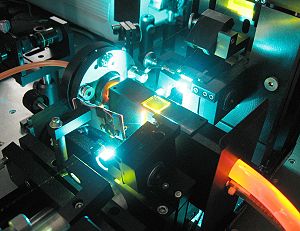 Close-up of a table-top dye laser based on Rhodamine 6G, emitting at 580 nm (yellow-orange). The emitted laser beam is visible as faint yellow lines. The orange dye solution enters the laser from the left, and is pumped by a 514 nm (blue-green) beam from an argon laser. The dye jet is in the center of the image, behind the yellow window.

A dye laser is a laser which uses an organic dye as the lasing medium, usually as a liquid solution. Compared to gases and most solid state lasing media, a dye can usually be used for a much wider range of wavelengths. The wide bandwidth makes them particularly suitable for tunable lasers and pulsed lasers. Moreover, the dye can be replaced by another type in order to generate different wavelengths with the same laser, although this usually requires replacing other optical components in the laser as well. 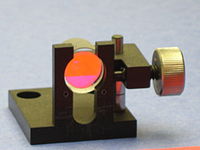 A dielectric mirror used in a dye laser.

A dye laser consists of an organic dye mixed with a solvent, which may be circulated through a dye cell, or streamed through open air using a dye jet. A high energy source of light is needed to "pump" the liquid beyond its lasing threshold. A fast discharge flashlamp or an external laser is usually used for this purpose. Mirrors are also needed to oscillate the light produced by the dye’s fluorescence, which is amplified with each pass through the liquid. The output mirror is normally around 80% reflective, while all other mirrors are usually more than 99% reflective. The dye solution is usually circulated at high speeds, to help avoid triplet absorption and to decrease degradation of the dye. A prism or diffraction grating is usually mounted in the beam path, to allow tuning of the beam.

Because the liquid medium of a dye laser can fit any shape, there are a multitude of different configurations that can be used. A Fabry–Pérot laser cavity is usually used for flashlamp pumped lasers, which consists of two mirrors, which may be flat or curved, mounted parallel to each other with the laser medium in between. The dye cell is usually side-pumped, with one or more flashlamps running parallel to the dye cell in a reflector cavity. The reflector cavity is often water cooled, to prevent thermal shock in the dye caused by the large amounts of near-infrared radiation which the flashlamp produces. Axial pumped lasers have a hollow, annular-shaped flashlamp that surrounds the dye cell, which has lower inductance for a shorter flash, and improved transfer efficiency. Coaxial pumped lasers have an annular dye cell that surrounds the flash lamp, for even better transfer efficiency, but have a lower gain due to diffraction losses. Flash pumped lasers can only be used for pulsed output.[3][4][5] 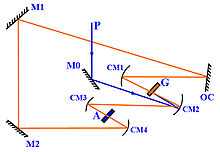 A ring laser design is often chosen for continuous operation, although a Fabry–Pérot design is sometimes used. In a ring laser, the mirrors of the laser are positioned to allow the beam to travel in a circular path. The dye cell, or cuvette, is usually very small. Sometimes a dye jet is used to help avoid reflection losses. The dye is usually pumped with an external laser, such as a nitrogen, excimer, or frequency doubled Nd:YAG laser. The liquid is circulated at very high speeds, to prevent triplet absorption from cutting off the beam.[6] Unlike Fabry–Pérot cavities, a ring laser does not generate standing waves which cause spatial hole burning, a phenomenon where energy becomes trapped in unused portions of the medium between the crests of the wave. This leads to a better gain from the lasing medium.[7][8]

The dyes used in these lasers contain rather large organic molecules which fluoresce. The incoming light excites the dye molecules into the state of being ready to emit stimulated radiation, the singlet state. In this state, the molecules emit light via fluorescence, and the dye is transparent to the lasing wavelength. Within a microsecond, or less, the molecules will change to their triplet state. In the triplet state, light is emitted via phosphorescence, and the molecules absorb the lasing wavelength, making the dye opaque. Liquid dyes also have an extremely high lasing threshold. Flashlamp pumped lasers need a flash with an extremely short duration, to deliver the large amounts of energy necessary to bring the dye past threshold before triplet absorption overcomes singlet emission. Dye lasers with an external pump laser can direct enough energy of the proper wavelength into the dye with a relatively small amount of input energy, but the dye must be circulated at high speeds to keep the triplet molecules out of the beam path.[9] 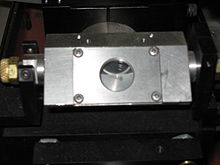 A cuvette used in a dye laser

Since organic dyes tend to decompose under the influence of light, the dye solution is normally circulated from a large reservoir.[10] The dye solution can be flowing through a cuvette, i.e., a glass container, or be as a dye jet, i.e., as a sheet-like stream in open air from a specially-shaped nozzle. With a dye jet, one avoids reflection losses from the glass surfaces and contamination of the walls of the cuvette. These advantages come at the cost of a more-complicated alignment.

Liquid dyes have very high gain as laser media. The beam only needs to make a few passes through the liquid to reach full design power, and hence, the high transmittance of the output coupler. The high gain also leads to high losses, because reflection from the dye cell walls, or flashlamp reflector, will dramatically reduce the amount of energy available to the beam. Pump cavities are often coated, anodized, or otherwise made of a material that will not reflect at the lasing wavelength while reflecting at the pump wavelength.[9]

Dye lasers emission is inherently broad. However, tunable narrow linewidth emission has been central to the success of the dye laser. In order to produce narrow bandwidth tuning these lasers use many types of cavities and resonators which include gratings, prisms, multiple-prism grating arrangements, and etalons.[11]

The first narrow linewidth dye laser, introduced by Hänsch, used a Galilean telescope as beam expander to illuminate the diffraction grating.[12] Next were the grazing-incidence grating designs[13][14] and the multiple-prism grating configurations.[15][16] The various resonators and oscillator designs developed for dye lasers have been successfully adapted to other laser types such as the diode laser.[17] The physics of narrow-linewidth multiple-prism grating lasers was explained by Duarte and Piper.[18] 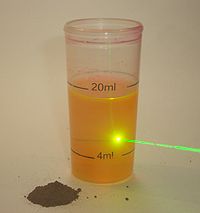 Some of the laser dyes are rhodamine, fluorescein, coumarin, stilbene, umbelliferone, tetracene, malachite green, and others. While some dyes are actually used in food coloring, most dyes are very toxic, and often carcinogenic. Many dyes, such as rhodamine 6G, (in its chloride form), can be very corrosive to all metals except stainless steel.

A wide variety of solvents can be used, although some dyes will dissolve better in some solvents than in others. Some of the solvents used are water, glycol, ethanol, methanol, hexane, cyclohexane, cyclodextrin, and many others. Solvents are often highly toxic, and can sometimes be absorbed directly through the skin, or through inhaled vapors. Many solvents are also extremely flammable.

Adamantane is added to some dyes to prolong their life.

Cycloheptatriene and cyclooctatetraene (COT) can be added as triplet quenchers for rhodamine G, increasing the laser output power. Output power of 1.4 kilowatt at 585 nm was achieved using Rhodamine 6G with COT in methanol-water solution.

As already mentioned flashlamps, and several types of lasers, can be used to optically pump dye lasers. A partial list of excitation lasers include[19]:

R. L. Fork, B. I. Greene, and C. V. Shank demonstrated, in 1981, the generation of ultra-short laser pulse using a ring-dye laser (or dye laser exploiting colliding pulse mode-locking). Such kind of laser is capable of generating laser pulses of ~ 0.1 ps duration.[20]

An atomic vapor laser isotope separation experiment at LLNL. Green light is from a copper vapor pump laser used to pump a highly tuned dye laser which is producing the orange light.

Dye lasers are used in many applications including:

In laser medicine these lasers are applied in several areas,[25][26] including dermatology where they are used to make skin tone more even. The wide range of wavelengths possible allows very close matching to the absorption lines of certain tissues, such as melanin or hemoglobin, while the narrow bandwidth obtainable helps reduce the possibility of damage to the surrounding tissue. They are used to treat port-wine stains and other blood vessel disorders, scars and kidney stones. They can be matched to a variety of inks for tattoo removal, as well as a number of other applications.[27]

In spectroscopy, dye lasers can be used to study the absorption and emission spectra of various materials. Their tunability, (from the near-infrared to the near-ultraviolet), narrow bandwidth, and high intensity allows a much greater diversity than other light sources. The variety of pulse widths, from ultra-short, femto-second pulses to continuous-wave operation, makes them suitable for a wide range of applications, from the study of fluorescent lifetimes and semiconductor properties to lunar laser ranging experiments.[28]