Dextroamphetamine is a psychostimulant drug which is known to produce increased wakefulness and focus as well as decreased fatigue and decreased appetite.

The dextroamphetamine salts constitute around 75% of the ADHD drug Adderall[2]. Dextroamphetamine is also an active metabolite of the prodrug lisdexamfetamine (Vyvanse), as well as of several older N-substituted amphetamine prodrugs used as anorectics, such as clobenzorex (Asenlix), benzphetamine (Didrex), and amphetaminil (Aponeuron).

Dextroamphetamine is used for the treatment of ADHD and narcolepsy.[3]

Dextroamphetamine may also be used for exogenous obesity and treatment-resistant depression.[4][5]

The U.S. Air Force uses dextroamphetamine as one of its "go pills", given to pilots on long missions to help them remain focused and alert.[6][7][8][9] The Tarnak Farm incident was linked by media reports to the use of this drug on long term fatigued pilots. A military did not accept this explanation, citing the lack of similar incidents. Newer stimulant medications or awakeness promoting agents with fewer side effects, such as modafinil are being investigated and sometimes issued for this reason.[6]

During the Vietnam War, Special Units of the US Military, such as MACV-SOG, were issued dextroamphetamine tablets. Due to the threat of misuse, these tablets were given to the Commanding Officer of the unit, and given out when needed.[10]

Though such use remains out of the mainstream, dextroamphetamine has been successfully applied in the treatment of certain categories of depression as well as other psychiatric syndromes.[11] Such alternate uses include reduction of fatigue in cancer patients,[12] antidepressant treatment for HIV patients with depression and debilitating fatigue,[13] and early stage physiotherapy for severe stroke victims.[14] If physical therapy patients take dextroamphetamine while they practice their movements for rehabilitation, they may learn to move much faster than without dextroamphetamine, and in practice sessions with shorter lengths.[15]

Along with methamphetamine, amphetamine and methylphenidate, dextroamphetamine is used as a recreational stimulant to induce euphoria and can be used as a study aid, social aid or party drug.

Withdrawal symptoms of dextroamphetamine primarily consist of fatigue, depression and an increased appetite. Symptoms may last for days with occasional use and weeks or months with chronic use, with severity dependent on the length of time and the amount of dextroamphetamine used. Withdrawal symptoms may also include anxiety, irritability, headaches, agitation, akathisia, hypersomnia (excessive sleeping), vivid or lucid dreams, deep REM sleep and suicidal ideation.[24][25][26]

The fatal dose in humans is not precisely known, but in various species of rat generally ranges between 50 and 100 mg/kg, or a factor of 100 over what is required to produce noticeable psychological effects.[27][28] Although the symptoms seen in a fatal overdose are similar to those of methamphetamine, their mechanisms are not identical, as some substances which inhibit dextroamphetamine toxicity do not do so for methamphetamine.[29][30]

An extreme symptom of overdose is amphetamine psychosis, characterized by vivid visual, auditory, and sometimes tactile hallucinations. Many of its symptoms are identical to the psychosis-like state which follows long-term sleep deprivation, so it remains unclear whether these are solely the effects of the drug, or due to the long periods of sleep deprivation which are often undergone by the chronic user. Amphetamine psychosis, however, is extremely rare in individuals taking oral amphetamines at therapeutic doses; it is usually seen in cases of prolonged or high-dose intravenous (IV) for non-medicinal uses.[31]

Dextroamphetamine is the dextrorotatory stereoisomer of the amphetamine molecule, which can take two different forms. It is a slightly polar, weak base and is lipophilic.[32] 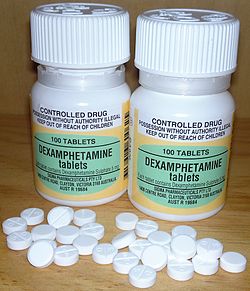 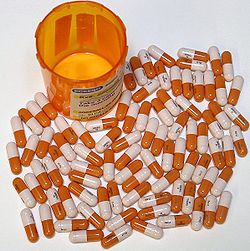 Another pharmaceutical that contains dextroamphetamine is Adderall. The drug formulation of Adderall (both controlled and instant release forms) is:

Adderall is roughly three-quarters dextroamphetamine, with it accounting for 72.7% of the amphetamine base in Adderall (the remaining percentage is levoamphetamine).

In relation to other over-the-counter ADD/ADHD pharmaceuticals, the d- isomer of racemic amphetamine is superior in bioavailibility and CNS stimulation.[39]

The molecular structure of amphetamine

Scientific findings have established that dextroamphetamine administration increases the activity of the phosphoinositol cycle via an indirect release of dopamine and noradrenaline. These results are the first time that this has been confirmed in humans.[40] Because dextroamphetamine is a substrate analog at monoamine transporters, at all doses, dextroamphetamine prevents the re-uptake of these neurotransmitters by competing with endogenous monoamines for uptake.[41] Transporter inhibition causes monoamines to remain in the synaptic cleft for a prolonged period (amphetamine inhibits monoamine reuptake in rats with a norepinephrine to dopamine ratio (NE:DA) of 1:1 and a norepinephrine to 5-hydroxytryptamine ratio (NE:5-HT) of about 100:1).[42]

At higher doses, when the concentration of dextroamphetamine is sufficient,[41] the drug can trigger direct release of norepinephrine and dopamine from the cytoplasmic transmitter pool, that is, dextroamphetamine will cause norepinephrine and dopamine efflux via transporter proteins, functionally reversing transporter action, which triggers a cascading release of catecholamines. This inversion leads to a release of large amounts of these neurotransmitters from the cytoplasm of the presynaptic neuron into the synapse, causing increased stimulation of post-synaptic receptors, inducing euphoria. Dextroamphetamine releases monoamines in rats with selectivity ratios of about NE:DA = 1:3.5 and NE:5-HT = 1:250, meaning that NE and DA are readily released, but release of 5-HT occurs at a 1/4 ration than of NE:DA.[43]

On average, about one half of a given dose is eliminated unchanged in the urine, while the other half is broken down into various metabolites (mostly benzoic acid).[45] However, the drug's half-life is highly variable because the rate of excretion is very sensitive to urinary pH. Under alkaline conditions, direct excretion is negligible and 95%+ of the dose is metabolized. Having an alkaline stomach will cause the drug to be absorbed faster through the stomach resulting in a higher blood level concentration of amphetamine. Having an alkaline bladder causes dextroamphetamine to be excreted more slowly from the blood and into the urine.

Alkalinization of the urine can decrease the renal elimination of amphetamines, both potentiating the strength and prolonging the mechanism of action, especially when ingested with sodium bicarbonate. There are also users who periodically misuse more than others, often using small amounts (1/2-1 teaspoon) of sodium bicarbonate mixed with water at 2-3 intervals following a single ingestion in order to achieve a longer euphoric effect. This method of administration may lead to a higher risk of intoxication, especially in children, in addition, tolerance and dependence develop rapidly.[46]

The main metabolic pathway is:

Another pathway, mediated by enzyme CYP2D6, is:

Although p-hydroxyamphetamine is a minor metabolite (~5% of the dose), it may have significant physiological effects as a norepinephrine analogue.[47]

Subjective effects are increased by larger doses, however, over the course of a given dose there is a noticeable divergence between such effects and drug concentration in the blood.[48] In particular, mental effects peak before maximal blood levels are reached, and decline as blood levels remain stable or even continue to increase.[49][50][51] This indicates a mechanism for development of acute tolerance, perhaps distinct from that seen in chronic use.[52] The long-term effects of amphetamines use on neural development in children has not been well established.[53] Based on a study in rats, amphetamine abuse during adolescence may impair adult working memory.[54]

Racemic amphetamine was first synthesized under the chemical name "phenylisopropylamine" in Berlin, 1887 by the Romanian chemist Lazar Edeleanu.[55] It was not widely marketed until 1932, when the pharmaceutical company Smith, Kline & French (now known as GlaxoSmithKline) introduced it in the form of the Benzedrine inhaler for use as a bronchodilator. Notably, the amphetamine contained in the Benzedrine inhaler was the liquid free-base,[n 1] not a chloride or sulfate salt.

Three years later, in 1935, the medical community became aware of the stimulant properties of amphetamine, specifically dextroamphetamine, and in 1937 Smith, Kline, and French introduced tablets under the tradename Dexedrine.[56] In the United States, Dexedrine was approved to treat narcolepsy, attention disorders, depression, and obesity. Dextroamphetamine was marketed in various other forms in the following decades, primarily by Smith, Kline, and French, such as several combination medications including a mixture of dextroamphetamine and amobarbital (a barbiturate) sold under the tradename Dexamyl and, in the 1950s, an extended release capsule (the "Spansule").[57]

It quickly became apparent that dextroamphetamine and other amphetamines had a high potential for misuse, although they were not heavily controlled until 1970, when the Comprehensive Drug Abuse Prevention and Control Act was passed by the United States Congress. Dextroamphetamine, along with other sympathomimetics, was eventually classified as Schedule II, the most restrictive category possible for a drug with a government sanctioned, recognized medical use.[58] Internationally, it has been available under the names AmfeDyn (Italy), Curban (US), Obetrol (Switzerland), Simpamina (Italy), Dexedrine (US & Canada), Dextropa (Portugal), and Stild (Spain).[59] According to UK pharmacies, the brand Dexedrine is no longer produced in the UK. It was apparently discontinued in 2010, most likely due to declining numbers being prescribed dextroamphetamine in the country.

In October 2010, GlaxoSmithKline sold the rights for Dexedrine Spansule to Amedra Pharmaceuticals (a subsidiary of CorePharma).[60]