The brain emerges during embryonic development from the neural tube, an early embryonic structure. The most anterior part of the neural tube is called the telencephalon, which expands rapidly due to cell proliferation, and eventually gives rise to the brain. Gradually some of the cells stop dividing and differentiate into neurons and glial cells, which are the main cellular components of the brain. The newly generated neurons migrate to different parts of the developing brain to self-organize into different brain structures. Once the neurons have reached their regional positions, they extend axons and dendrites, which allow them to communicate with other neurons via synapses. Synaptic communication between neurons leads to the establishment of functional neural circuits that mediate sensory and motor processing, and underlie behavior. The brain does most of its development within the first 20 years of life.

Some landmarks of neural development include the birth and differentiation of neurons from stem cell precursors, the migration of immature neurons from their birthplaces in the embryo to their final positions, outgrowth of axons and dendrites from neurons, guidance of the motile growth cone through the embryo towards postsynaptic partners, the generation of synapses between these axons and their postsynaptic partners, and finally the lifelong changes in synapses, which are thought to underlie learning and memory.

During early embryonic development the ectoderm becomes specified to give rise to the epidermis (skin) and the neural plate. The conversion of undifferentiated ectoderm to neuro-ectoderm requires signals from the mesoderm. At the onset of gastrulation presumptive mesodermal cells move through the dorsal blastopore lip and form a layer in between the endoderm and the ectoderm. These mesodermal cells that migrate along the dorsal midline give rise to a structure called the notochord. Ectodermal cells overlying the notochord develop into the neural plate in response to a diffusible signal produced by the notochord. The remainder of the ectoderm gives rise to the epidermis (skin). The ability of the mesoderm to convert the overlying ectoderm into neural tissue is called Neural Induction.

A transplanted blastopore lip can convert ectoderm into neural tissue and is said to have an inductive effect. Neural Inducers are molecules that can induce the expression of neural genes in ectoderm explants without inducing mesodermal genes as well. Neural induction is often studied in Xenopus embryos since they have a simple body pattern and there are good markers to distinguish between neural and non-neural tissue. Examples of Neural Inducers are the molecules Noggin and Chordin.

Patterning of the nervous system

Ectoderm follows a default pathway to become neural tissue. Evidence for this comes from single, cultured cells of ectoderm which go on to form neural tissue. This is postulated to be because of a lack of BMPs, which are blocked by the organiser. The organiser may produce molecules such as follistatin, noggin and chordin which inhibit BMPs.

The ventral neural tube is patterned by Sonic Hedgehog (Shh) from the notochord, which acts as the inducing tissue. Notochord-derived Shh signals to the floor plate, and induces Shh expression in the floor plate. Floor plate-derived Shh subsequently signals to other cells in the neural tube, and is essential for proper specification of ventral neuron progenitor domains. Loss of Shh from the notochord and/or floor plate prevents proper specification of these progenitor domains. Shh binds Patched1, relieving Patched-mediated inhibition of Smoothened, leading to activation of Gli family of transcription factors (Gli1, Gli2, and Gli3) transcription factors.

The dorsal neural tube is patterned by BMPs from the epidermal ectoderm flanking the neural plate. These induce sensory interneurones by activating Sr/Thr kinases and altering SMAD transcription factor levels.

Signals that control anteroposterior neural development include FGF and retinoic acid which act in the hindbrain and spinal cord.[3] The hindbrain, for example, is patterned by Hox genes, which are expressed in overlapping domains along the anteroposterior axis under the control of retinoic acid. The 3' genes in the Hox cluster are induced by retinoic acid in the hindbrain, whereas the 5' Hox genes are not induced by retinoic acid and are expressed more posteriorly in the spinal cord. Hoxb-1 is expressed in rhombomere 4 and gives rise to the facial nerve. Without this Hoxb-1 expression, a nerve which is similar to the trigeminal nerve arises.

Neuronal migration is the method by which neurons travel from their origin or birth place to their final position in the brain. There are several ways they can do this, e.g. by radial migration or tangential migration. (see time lapse sequences of radial migration (also known as glial guidance) and somal translocation.)[4] 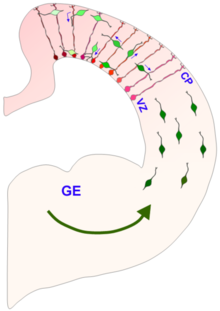 Radial migration Neuronal precursor cells proliferate in the ventricular zone of the developing neocortex. The first postmitotic cells to migrate form the preplate which are destined to become Cajal-Retzius cells and subplate neurons. These cells do so by somal translocation. Neurons migrating with this mode of locomotion are bipolar and attach the leading edge of the process to the pia. The soma is then transported to the pial surface by nucleokinesis, a process by which a microtubule "cage" around the nucleus elongates and contracts in association with the centrosome to guide the nucleus to its final destination.[5] Radial glia, whose fibers serve as a scaffolding for migrating cells, can itself divide[6] or translocate to the cortical plate and differentiate either into astrocytes or neurons.[7] Somal translocation can occur at any time during development.[4]

Subsequent waves of neurons split the preplate by migrating along radial glial fibres to form the cortical plate. Each wave of migrating cells travel past their predecessors forming layers in an inside-out manner, meaning that the youngest neurons are the closest to the surface.[8][9] It is estimated that glial guided migration represents 90% of migrating neurons in human and about 75% in rodents.[10]

Others modes of migration There is also a method of neuronal migration called multipolar migration.[11][12] This is seen in multipolar cells, which are abundantly present in the cortical intermediate zone. They do not resemble the cells migrating by locomotion or somal translocation. Instead these multipolar cells express neuronal markers and extend multiple thin processes in various directions independently of the radial glial fibers.[11]

The survival of neurons is regulated by survival factors, called trophic factors. The neurotrophic hypothesis was formulated by Victor Hamburger and Rita Levi Montalcini based on studies of the developing nervous system. Victor Hamburger discovered that implanting an extra limb in the developing chick led to an increase in the number of spinal motor neurons. Initially he thought that the extra limb was inducing proliferation of motor neurons, but he and his colleagues later showed that there was a great deal of motor neuron death during normal development, and the extra limb prevented this cell death. According to the neurotrophic hypothesis, growing axons compete for limiting amounts of target-derived trophic factors and axons that neurons that fail to receive insufficient trophic support die by apoptosis. It is now clear that factors produced by a number of sources contribute to neuronal survival.

CNTF: Ciliary neurotrophic factor is another protein that acts as a survival factor for motor neurons. CNTF acts via a receptor complex that includes CNTFRα, GP130, and LIFRβ. Activation of the receptor leads to phosphorylation and recruitment of the JAK kinase, which in turn phosphorylates LIFRβ. LIFRβ acts as a docking site for the STAT transcription factors. JAK kinase phosphorylates STAT proteins, which dissociate from the receptor and translocate to the nucleus to regulate gene expression.

GDNF: Glial derived neurotrophic factor is a member of the TGFb family of proteins, and is a potent trophic factor for striatal neurons. The functional receptor is a heterodimer, composed of type 1 and type 2 receptors. Activation of the type 1 receptor leads to phosphorylation of Smad proteins, which translocate to the nucleus to activate gene expression.

Neuromuscular junction Much of our understanding of synapse formation comes from studies at the neuromuscular junction. The transmitter at this synapse is acetylcholine. The acetylcholine receptor (AchR) is present at the surface of muscle cells before synapse formation. The arrival of the nerve induces clustering of the receptors at the synapse. McMahan and Sanes showed that the synaptogenic signal is concentrated at the basal lamina. They also showed that the synaptogenic signal is produced by the nerve, and they identified the factor as Agrin. Agrin induces clustering of AchRs on the muscle surface and synapse formation is disrupted in agrin knockout mice. Agrin transuces the signal via MuSK receptor to rapsyn. Fischbach and colleagues showed that receptor subunits are selectively transcribed from nuclei next to the synaptic site. This is mediated by neuregulins.

In the mature synapse each muscle fiber is innervated by one motor neuron. However, during development many of the fibers are innervated by multiple axons. Lichtman and colleagues have studied the process of synapses elimination. This is an activity-dependent event. Partial blockage of the receptor leads to retraction of corresponding presynaptic terminals.

CNS synapses Agrin appears not to be a central mediator of CNS synapse formation and there is active interest in identifying signals that mediate CNS synaptogenesis. Neurons in culture develop synapses that are similar to those that form in vivo, suggesting that synaptogenic signals can function properly in vitro. CNS synaptogenesis studies have focused mainly on glutamatergic synapses. Imaging experiments show that dendrites are highly dynamic during development and often initiate contact with axons. This is followed by recruitment of postsynaptic proteins to the site of contact. Stephen Smith and colleagues have shown that contact initiated by dendritic filopodia can develop into synapses.

Several motorneurones compete for each neuromuscular junction, but only one survives till adulthood. Competition in vitro has been shown to involve a limited neurotrophic substance that is released, or that neural activity infers advantage to strong post-synaptic connections by giving resistance to a toxin also released upon nerve stimulation. In vivo it is suggested that muscle fibres select the strongest neuron through a retrograde signal.