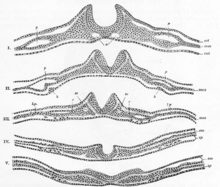 Neurulation is the stage of organogenesis in vertebrate embryos, during which the neural tube is transformed into the primitive structures that will later develop into the central nervous system.[1]

The process begins when the notochord induces the formation of the central nervous system (CNS) by signaling the ectoderm germ layer above it to form the thick and flat neural plate. The neural plate folds in upon itself to form the neural tube, which will later differentiate into the spinal cord and the brain, eventually forming the central nervous system.[citation needed]

The cells of the neural plate are signaled to become high-columnar and can be identified through microscopy as different from the surrounding epiblastic ectoderm. The cells move laterally and away from the central axis and change into a truncated pyramid shape. This pyramid shape is achieved through tubulin and actin in the apical portion of the cell which constricts as they move. The variation in cell shapes is partially determined by the location of the nucleus within the cell, causing bulging in areas of the cells forcing the height and shape of the cell to change. This process is known as apical constriction[citation needed]

The folding of the neural tube to form an actual tube does not occur all at once. Instead, it begins approximately at the level of the fourth somite at Carnegie stage 9 (around Embryonic day 20 in humans). The lateral edges of the neural plate touch in the midline and join together. This continues both cranially (toward the head) and caudally (toward the tail). The openings that are formed at the cranial and caudal regions are termed the cranial and caudal neuropores. In human embryos, the cranial neuropore closes approximately on day 24 and the caudal neuropore on day 26 (Carnegie stages 11 and 13 respectively). Failure of the cranial (anterior) and caudal (posterior) neuropore closure results in conditions called anecephaly and spina bifida, respectively. Additionally, failure of the neural tube to close throughout the length of the body results in a condition called cranioarchischisis.[citation needed]

After SHH from the notochord induces its formation, the floor plate of the incipient neural tube also secretes SHH. After closure, the neural tube forms a basal plate or floor plate and an alar plate or roof plate in response to the combined effects of Shh and factors including BMP4 secreted by the roof plate. The basal plate forms most of the ventral portion of the nervous system, including the motor portion of the spinal cord and brain stem; the alar plate forms the dorsal portions, devoted mostly to sensory processing.[citation needed]

The dorsal epidermis expresses BMP4 and BMP7. The roof plate of the neural tube responds to those signals to express more BMP4 and other TGF-b signals to form a dorsal/ventral gradient among the neural tube. The notochord expresses Sonic Hedgehog (Shh). The floor plate responds to Shh by producing its own Shh and forming a gradient. These gradients allows for the differential expression of transcription factors.[citation needed]

Complexities of the model

In actuality, the folding of the neural tube is still not entirely understood and is still being studied. The simplistic model of the closure occurring in one step cranially and caudally does not explain the high frequency of neural tube defects. Proposed theories include closure of the neural tube occurs in regions, rather than entirely linearly.[citation needed]

In secondary neurulation, the neural ectoderm and some cells from the endoderm form the medullary cord. The medullary cord condenses, separates and then forms cavities. These cavities then merge to form a single tube. Secondary Neurulation occurs in the posterior section of most animals but it is better expressed in birds. Tubes from both primary and secondary neurulation eventually connect.[citation needed]

The anterior segment of the neural tube forms the three main parts of the brain: the forebrain, midbrain, and the hindbrain. Formation of these structures begins with a swelling of the neural tube in a pattern specified by Hox genes. Ion pumps are used to increase the fluid pressure within the tube and create a bulge. A blockage between the brain and the spinal cord prevents the fluid accumulation from leaking out. These brain regions further divide into subregions. The hindbrain divides into different segments called rhombomeres. Neural crest cells form ganglia above each rhombomere. The neural tube becomes the germinal neuroepithelium and serves as a source of new neurons during brain development. The brain develops from the inside-out.[citation needed]

Mesoderm surrounding the notochord at the sides will develop into the somites (future muscles, bones, and contributes to the formation of limbs of the vertebrate).[citation needed]

Masses of tissue called the neural crest that are located at the very edges of the lateral plates of the folding neural tube separate from the neural tube and migrate to become a variety of different but important cells.[citation needed]

Neural crest cells will migrate through the embryo and will give rise to several cell populations, including pigment cells and the cells of the peripheral nervous system.[citation needed]

Failure to complete the neurulation process will lead to an open neural tube, which is a common form of birth defect known as spina bifida.[2] Spina bifida can lead to paralysis beneath the affected region of the spinal cord. Sufferers may require crutches or wheelchairs to move about, and may also suffer from lack of bladder and bowel control.[citation needed]

Neural tube defects are among the most common and disabling birth defects, occurring in roughly 1 in every 500 live births.[3]