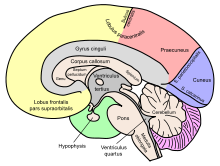 Anatomy of the human brain.

Neuroanatomy is the study of the anatomy and organization of the nervous system. In contrast to animals with radial symmetry, whose nervous system consists of a distributed network of cells, animals with bilateral symmetry have segregated, defined nervous systems, and thus we can begin to speak of their neuroanatomy. In vertebrates, both the internal structure of the brain and spinal cord (together called the central nervous system, or CNS) and the routes of the nerves that connect to the rest of the body (known as the peripheral nervous system, or PNS) are extremely elaborate. The delineation of distinct structures and regions of the nervous system has been critical in investigating how it works. For example, much of what neuroscientists have learned comes from observing how damage or "lesions" to specific brain areas affects behavior or other neural functions.

The first known written record of a study of the anatomy of the human brain is the ancient Egyptian document the Edwin Smith Papyrus.[1] The next major development in neuroanatomy was some thousand years later when the Greek Alcmaeon determined that the brain and not the heart ruled the body and that the senses were dependent on the brain.[2]

After Alcmaeon’s findings, many scientists, philosophers, and physicians from around the world continued to contribute to the understanding of neuroanatomy, notably: Galen, Herophilus, Rhazes and Erasistratus. Herophilus and Erasistratus of Alexandria were perhaps the most influential Greek neuroscientists with their studies involving dissecting the brains.[2] For several hundred years afterward, with the cultural taboo of dissection, no major progress occurred in neuroscience. However, Pope Sixtus IV effectively revitalized the study of neuroanatomy by altering the papal policy and allowing human dissection. This resulted in a boom of research in neuroanatomy by artists and scientists of the Renaissance.[3]

In 1664, Thomas Willis, a physician and professor at Oxford University, coined the term neurology when he published his text Cerebri anatome which is considered the foundation of neuroanatomy.[4] The next four hundred some years has produced a great deal of documentation and study of the neural systems.

At the tissue level, the nervous system is composed of neurons, glial cells, and extracellular matrix. Both neurons and glial cells come in many types (see, for example, the nervous system section of the list of distinct cell types in the adult human body). Neurons are the information-processing cells of the nervous system: they sense our environment, communicate with each other via electrical signals and synapses, and produce our thoughts and movements. Glial cells maintain homeostasis, produce myelin, and provide support and protection for the brain's neurons. Some glial cells (astrocytes) can even propagate intercellular calcium waves over long distances in response to stimulation, and release gliotransmitters in response to changes in calcium concentration. The extracellular matrix also provides support on the molecular level for the brain's cells.

At the organ level, the nervous system is composed of brain regions, such as the hippocampus in mammals or the mushroom bodies of the fruit fly.[5] These regions are often modular and serve a particular role within the general pathways of the nervous system. For example, the hippocampus is critical for forming memories. The nervous system also contains nerves, which are bundles of fibers that originate from the brain and spinal cord, and branch repeatedly to innervate every part of the body. Nerves are made primarily of the axons of neurons, along with a variety of membranes that wrap around and segregate them into nerve fascicles.

Para-sagittal MRI of the head in a patient with benign familial macrocephaly.

In anatomy in general and neuroanatomy in particular, several sets of terms are used to denote orientation and location (see Anatomical terms of location). The pairs of terms used most commonly in neuroanatomy are:

Commonly used terms for planes of orientation or planes of section in neuroanatomy are "transverse", "coronal", and "sagittal".

The directional terms "superior" and "inferior" and the "horizontal" plane are often used interchangeably with "dorsal", "ventral", and "transverse", and are equivalent in all animals other than humans. However, because humans walk on two legs, we have evolved a kink in our central nervous system, known as the cephalic flexure, which bends the rostral part of the CNS at a 90 degree angle to the caudal part, at the level of the brainstem. Thus, confusion can arise when using these terms; for example, a coronal section of the forebrain, say, just behind the eyes, is in a plane parallel to the face. But as it moves in the rostral direction, it rotates, such that a coronal section of the spinal cord is parallel to the ground. Similarly, one can say that the forebrain, the most rostral part of the CNS, is the most anterior part of the nervous system of a rat or a dog, but is the most superior part in a human.

Modern developments in neuroanatomy are directly correlated to the technologies used to perform research. Therefore it is necessary to discuss the various tools that are available. Many of the histological techniques used to study other tissues can be applied to the nervous system as well. However, there are some techniques that have been developed especially for the study of neuroanatomy:

Aside from the human brain, there are many other animals whose brains and nervous systems have received extensive study as model systems, including mice, zebrafish,[6] fruit fly,[7] and a species of roundworm called C. elegans. Each of these has its own advantages and disadvantages as a model system. For example, the C. elegans nervous system is extremely stereotyped from one individual worm to the next. This has allowed researchers using electron microscopy to map the paths and connections of all of the approximately 300 neurons in this species. The fruit fly is widely studied in part because its genetics is very well understood and easily manipulated. The mouse is used because, as a mammal, its brain is more similar in structure to our own (e.g., it has a six-layered cortex, yet its genes can be easily modified and its reproductive cycle is relatively fast.

Nervous system of a generic bilaterian animal, in the form of a nerve cord with segmental enlargements, and a "brain" at the front

The brain is small and simple in some species, such as the nematode worm, where the body plan is quite simple: a tube with a hollow gut cavity running from the mouth to the anus, and a nerve cord with an enlargement (a ganglion) for each body segment, with an especially large ganglion at the front, called the brain. The nematode Caenorhabditis elegans has been studied because of its importance in genetics.[8] In the early 1970s, Sydney Brenner chose it as a model system for studying the way that genes control development, including neuronal development. One advantage of working with this worm is that the nervous system of the hermaphrodite contains exactly 302 neurons, always in the same places, making identical synaptic connections in every worm.[9] Brenner's team sliced worms into thousands of ultrathin sections and photographed every section under an electron microscope, then visually matched fibers from section to section, to map out every neuron and synapse in the entire body.[10] Nothing approaching this level of detail is available for any other organism, and the information has been used to enable a multitude of studies that would not have been possible without it.[11]

Drosophila melanogaster is a popular experimental animal because it is easily cultured en masse from the wild, has a short generation time, and mutant animals are readily obtainable.

Arthropods have a central brain with three divisions and large optical lobes behind each eye for visual processing. The brain of a fruit fly contains several million synapses, compared to at least 100 trillion in the human brain. Approximately two-thirds of the Drosophila brain is dedicated to visual processing.

Thomas Hunt Morgan started to work with Drosophila in 1906, and this work earned him the 1933 Nobel Prize in Medicine for identifying chromosomes as the vector of inheritance for genes. Because of the large array of tools available for studying Drosophila genetics, they have been a natural subject for studying the role of genes in the nervous system.[12] The genome has been sequenced and published in 2000. About 75% of known human disease genes have a recognizable match in the genome of fruit flies. Drosophila is being used as a genetic model for several human neurological diseases including the neurodegenerative disorders Parkinson's, Huntington's, spinocerebellar ataxia and Alzheimer's disease. In spite of the large evolutionary distance between insects and mammals, many basic aspects of Drosophila neurogenetics have turned out to be relevant to humans. For instance, the first biological clock genes were identified by examining Drosophila mutants that showed disrupted daily activity cycles.[13]

Mouse mutants: Rab23 is an essential negative regulator of the mouse Sonic hedgehog signaling pathway.[14] The first understanding of biological processes requiring the Rab23 gene came from 2 independent mouse mutations in the gene [15][16] and an epistasis analysis with mutations in the mouse shh gene.[14] These studies showed that the gene is required for normal development of the brain and spinal cord and that the morphological defects seen in mutant embryos, such as failure to close dorsal regions of the neural tube during development, appeared secondary to expansion of ventral and reduction of dorsal identities in the developing neural tube. These same mutations implicated the RAB23 gene in development of digits and eyes. The mouse open brain (opb) and Sonic hedgehog (Shh) genes have opposing roles in neural patterning: opb is required for dorsal cell types and Shh is required for ventral cell types in the spinal cord.[14] In human, a regulator of rab: RabGDI alpha has been implicated in non-specific X-linked mental retardation.