Olanzapine (trade names Zyprexa, Zalasta, Zolafren, Olzapin, Oferta, Zypadhera or in combination with fluoxetine Symbyax) is an atypical antipsychotic, approved by the FDA for the treatment of schizophrenia and bipolar disorder.[2] Olanzapine is structurally similar to clozapine, but is classified as a thienobenzodiazepine. The olanzapine formulations are manufactured and marketed by the pharmaceutical company Eli Lilly and Company, whose patent for olanzapine proper expires in 2011 (in October 2009 a Canadian judge ruled that the 1991 patent was invalid).[3] Sales of Zyprexa in 2008 were $2.2B in the US alone, and $4.7B in total.[4]

Known FDA approvals are as follows:

Case-reports, open-label, and small pilot studies suggest efficacy of olanzapine for the treatment of some anxiety spectrum disorders (e.g. generalized anxiety disorder,[10] panic disorder,[11] delusional parasitosis,[12] post-traumatic stress disorder);[13] however, olanzapine has not been rigorously evaluated in randomized, placebo-controlled trials for this use and is not FDA approved for these indications. Other common off-label uses of olanzapine include the treatment of eating disorders (e.g. anorexia nervosa) and as an adjunctive treatment for major depressive disorder without psychotic features. It has also been used for Tourette syndrome and stuttering.[14] Olanzapine is also used in many addiction clinics as a sleep aid (usually 2.5–5 mg) due to its low abuse profile and zero addictive properties.[15]

Olanzapine has been considered as part of an early psychosis approach for schizophrenia. The Prevention through Risk Identification, Management, and Education (PRIME) study, funded by the National Institute of Mental Health and Eli Lilly, tested the hypothesis that olanzapine might prevent the onset of psychosis in people at very high risk for schizophrenia. The study examined 60 patients with prodromal schizophrenia, who were at an estimated risk of 36–54% of developing schizophrenia within a year, and treated half with olanzapine and half with placebo.[16] In this study, patients receiving olanzapine did not have a significantly lower risk of progressing to psychosis. Olanzapine was effective for treating the prodromal symptoms, but was associated with significant weight gain.[17]

Citing an increased risk of stroke, in 2004 the Committee on the Safety of Medicines (CSM) in the UK issued a warning that olanzapine and risperidone, both atypical antipsychotic medications, should not be given to elderly patients with dementia. In the U.S., olanzapine comes with a black box warning for increased risk of death in elderly patients. It is not approved for use in patients with dementia-related psychosis.[18] However, a BBC investigation in June 2008 found that this advice was being widely ignored by British doctors.[19]

Olanzapine has has been investigated for use as an antiemetic, particularly for the control of chemotherapy-induced nausea and vomiting (CINV). A 2007 study demonstrated its successful potential for this use, achieving a complete response in the acute prevention of nausea and vomiting in 100% of patients treated with moderately and highly-emetogenic chemotherapy, when used in combination with palonosetron and dexamethasone.[20] 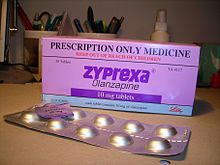 Dose may be adjusted depending on the patient's response to the drug. The dose also will depend on certain medical problems the person may have. It is generally recommended to be taken once daily before bed as it is highly sedating. However, sedation tends to diminish as treatment is pursued.

Olanzapine has a higher affinity for 5-HT2 serotonin receptors than D2 dopamine receptors. Other affinities are (Ki, nM):

Like most atypical antipsychotics, compared to the older typical ones, olanzapine has a lower affinity for histamine, cholinergic muscarinic and alpha adrenergic receptors. Olanzapine also exhibits weak affinity for GABAA, BZD receptor site[21] which may contribute slightly to its sedating properties.[22] The mode of action of olanzapine's antipsychotic activity is unknown. It may involve antagonism at serotonin receptors. Antagonism of dopamine receptors is associated with extrapyramidal effects such as tardive dyskinesia, and with therapeutic effects. Antagonizing H1 histamine receptors causes sedation and may cause weight gain, although antagonistic actions at 5-HT2C receptors have also been implicated in weight gain.

Olanzapine is metabolized by the cytochrome P450 system isoenzymes 1A2 and 2D6 (minor pathway). Drug metabolism may be increased or decreased by agents that induce (e.g. cigarette smoke) or inhibit (e.g. fluvoxamine or ciprofloxacin) CYP1A2 activity, respectively.

As with all neuroleptic drugs, olanzapine can cause tardive dyskinesia and rare, but life-threatening, neuroleptic malignant syndrome. Some also associate all antipsychotics with permanent brain damage.[23]

Other recognised side effects may include:

The Food and Drug Administration requires all atypical antipsychotics to include a warning about the risk of developing hyperglycemia and diabetes, both of which are factors in the metabolic syndrome. These effects may be related to the drugs' ability to induce weight gain, although there are some reports of metabolic changes in the absence of weight gain.[citation needed] Studies have indicated that Olanzapine carries a greater risk of causing and exacerbating diabetes than another commonly prescribed atypical antipsychotic, Risperidone. Of all the atypical antipsychotics, olanzapine is one of the most likely to induce weight gain based on various measures.[26][27][28][29] The effect is not dose dependent.[dubious – discuss] Olanzapine may directly affect adipocyte function, promoting fat deposition.[30] There are some case reports of olanzapine-induced diabetic ketoacidosis.[31] Olanzapine may decrease insulin sensitivity.[32] though one 3-week study seems to refute this.[33] It may also increase triglyceride levels.[27]

Despite weight gain, a large multi-center randomized National Institute of Mental Health study found that olanzapine was better at controlling symptoms because patients were more likely to remain on olanzapine than the other drugs.[36] One small, open-label, non-randomized study suggest that taking olanzapine by orally dissolving tablets may induce less weight gain,[37] but this has not been substantiated in a blinded experimental setting.

In a placebo-compared study of six Macaque monkeys receiving olanzapine between 17 and 27 months, a significant brain volume and weight decreases (8-11%) were detected.[38] In latter studies of the stored samples, the changes were attributed to astrocyte and oligodendrocyte loss,[39] with the neurons spared but positioned more closely compared to the controls.[clarification needed] However according to this study the neurons do not seem to be completely spared. The gray matter shrinking found was 14.6%, but the neuron density increase was only 10.2% which corresponds to approximately a loss of 5% of the neurons.[citation needed]

Olanzapine has demonstrated carcinogenic effects in multiple studies when exposed chronically to female mice and rats, but not male mice and rats. The tumors found were in either the liver or mammary glands of the animals.[40]

Symptoms of an overdose include tachycardia, agitation, dysarthria, decreased consciousness and coma. Death has been reported after an acute overdose of 450 mg, but also survival after an acute overdose of 1500 mg.[44] There is no known specific antidote for olanzapine overdose, and even physicians are recommended to call a certified poison control center for information on the treatment of such a case.[44] Prescription should be kept in small quantity to reduce risk overdose as acute bipolar disorder and schizophrenic patients can be at a high risk of suicide(Eli Lilly 2010)

According to a New York Times article published on December 17, 2006,[45] "Eli Lilly has engaged in a decade-long effort to play down the health risks of Zyprexa, its best-selling medication for schizophrenia, according to hundreds of internal Lilly documents and e-mail messages among top company managers", most of which had been disclosed as the result of lawsuits by individuals who had taken the drug, though other documents had been stolen.[46] These had been sent to a number of journalists by a lawyer advocate for individuals with a psychiatric diagnosis opposed to forced psychiatric treatment. Eli Lilly filed a protection order to stop the dissemination of certain Eli Lilly documents about Zyprexa which they, and the judge, believed to be confidential and "not generally appropriate for public consumption".[46] Temporary injunctions required those who had been received the documents to return them and that the documents be removed from websites which had posted them.[47] In his final judgement, Judge Weinstein issued a permanent judgement against further dissemination of the documents and requiring their return by a number of parties named by Lilly.[46] These health risks include an increased risk for diabetes through Zyprexa's links to obesity and its tendency to raise blood sugar. Zyprexa is Lilly’s top-selling drug, with sales of $4.2 billion last year.

The documents, given to The New York Times by Jim Gottstein, show that Lilly executives kept important information from doctors about Zyprexa’s links to obesity and its tendency to raise blood sugar — both known risk factors for diabetes. The Times of London also obtained copies of the documents and reported that as early as October 1998, Lilly considered the risk of drug-induced obesity to be a "top threat" to Zyprexa sales.[48] In another document, dated October 9, 2000, senior Lilly research physician Robert Baker noted that an academic advisory board he belonged to was "quite impressed by the magnitude of weight gain on olanzapine and implications for glucose."[48]

Lilly’s own published data, which it told its sales representatives to play down in conversations with doctors, has shown that 30 percent of patients taking Zyprexa gain 22 pounds or more after a year on the drug, another study showed 16% of Zyprexa patients gained at least 30 kg (66 pounds) in one year, and some patients have reported gaining 100 pounds or more. But Lilly was concerned that Zyprexa’s sales would be hurt if the company was more forthright about the fact that the drug might cause unmanageable weight gain or diabetes, according to the documents, which cover the period 1995 to 2004. In 2006, Lilly paid $700 million to settle 18,000 lawsuits from people who said they had developed diabetes or other diseases after taking Zyprexa. Thousands more suits are still pending.[49]

In 2002, British and Japanese regulatory agencies warned that Zyprexa may be linked to diabetes, but even after the FDA issued a similar warning in 2003, Lilly did not publicly disclose their own findings.

Eli Lilly agreed on January 4, 2007 to pay up to $500 million to settle 18,000 lawsuits from people who claimed they developed diabetes or other diseases after taking Zyprexa. Including earlier settlements over Zyprexa, Lilly has now agreed to pay at least $1.2 billion to 28,500 people who claim they were injured by the drug. At least 1,200 suits are still pending, the company said. About 20 million people worldwide have taken Zyprexa since its introduction in 1996.[50] On January 8, 2007, Judge Jack B. Weinstein refused the Electronic Frontier Foundation's motion to stay his order.[51]

On January 15, 2009 Eli Lilly pled guilty to a misdemeanor charge of illegally marketing Zyprexa for off-label use, and agreed to pay $1.4 billion.[52] Although Lilly had evidence that it is not effective for dementia, Zyprexa was marketed for elderly Alzheimer's patients.[53] The drug carries an F.D.A. warning that it increases the risk of death in older patients with dementia-related psychosis.[54]

In order to make up for the costs for settling the lawsuits and shrinking sales figures for Zyprexa in the U.S.A. the company increased the prices for this medication in Germany in May 2007 by 18 percent. [55][56],In Canada a class action lawsuit was settled in Ontario, Quebec and British Columbia.