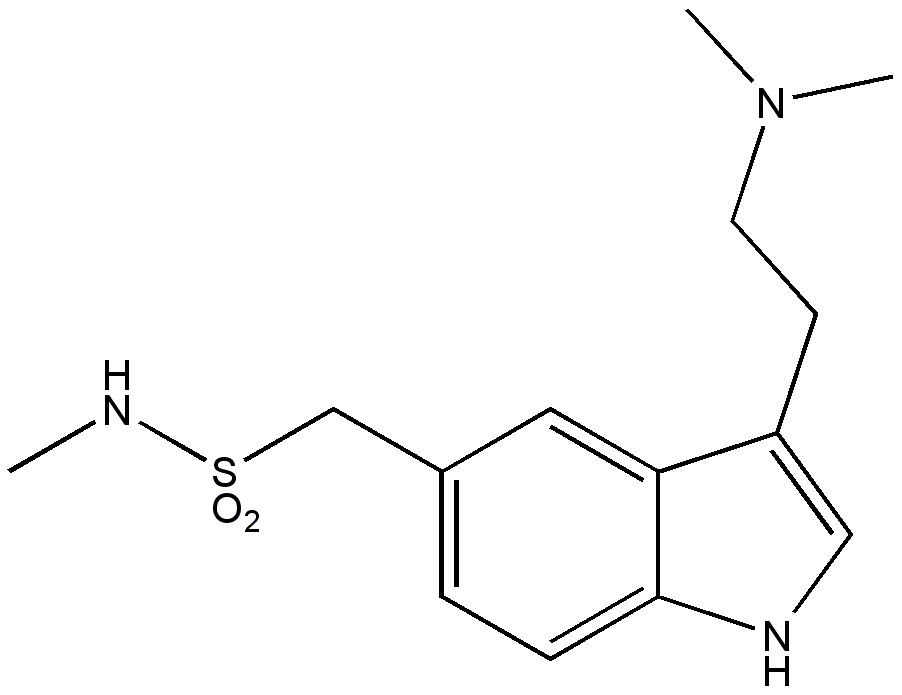 Sumatriptan (Imitrex, Imigran, Imigran Recovery) is a drug including a group which was marketed by for the treatment of s.

Several dosage forms for sumatriptan have been approved, including s, solution for , and nasal s. Sumatriptan was the first triptan available (in ), and, in the United States and most developed countries, is available only by medical prescription. In the United Kingdom, sumatriptan is available over the counter, under the name Imigran Recovery. It is sold in packs of two 50mg tablets for approximately £7.99 (about $15 US). Larger pack sizes, the nasal spray, and the liquid preparation for injection are still only available by prescription.It is marketed as a name of IMIGRAN Recovery.Originally covered by UK Patent [http://gb.espacenet.com/search97cgi/s97_cgi.exe?action=View&VdkVgwKey=GB2162522A&DocOffset=1&DocsFound=1&QueryZip=%28gb2162522%29+%3CIN%3E+pn&Collection=dips&SearchUrl=http%3A%2F%2Fgb%2Eespacenet%2Ecom%2Fsearch97cgi%2Fs97%5Fcgi%2Eexe%3Faction%3DFilterSearch%26QueryZip%3D%2528gb2162522%2529%2B%253CIN%253E%2Bpn%26Filter%3Dgb%252Fen%252Fespacefilt%252Ehts%26ResultTemplate%3Dgb%252Fen%252Fresults%252Ehts%26Collection%3Ddips%26ResultStart%3D1%26ResultCount%3D20&ViewTemplate=gb/en/textdoc.hts&ViewErrorTemplate=gb/en/incerror.hts&DocsFound1=1&BeginHighlight=%3Cspan%3E&EndHighlight=%3C/span%3E&HLNavigate= GB2162522] , extended by supplementary protection certificate SPC/GB93/071, protection in the UK (as well as the rest of Europe), expired on 16 May 2006. Through patent litigation, Glaxo was able to extend their US patent considerably beyond this date. However, as the result of a lawsuit by the maker of a generic version of the injectable version of Imitrex, a settlement should allow this generic to come to the market in the US in August 2008.

On April 15, 2008, the US FDA approved a combination of sumatriptan and , an NSAID, which will be marketed under the brand name Treximet. [ [http://www.gsk.com/media/pressreleases/2008/2008_us_pressrelease_10034.htm GSK press release - Treximet (sumatriptan and naproxen sodium) tablets approved by FDA for acute treatment of migraine] ]

Often, levels in the brain become extremely low before the onset of a migraine. Sumatriptan is administered to aid in leveling the serotonin levels in the brain. Sumatriptan is structurally similar to serotonin, and is a (types 5-HT1D and 5-HT1B [ ] ) , which is one of the receptors to which serotonin binds. The specific receptor subtype it activates is present in the cranial and basilar arteries. Activation of these receptors causes of those dilated arteries. Sumatriptan is also shown to decrease the activity of the , which probably accounts for sumatriptan's efficacy in treating cluster headaches. The injectable form of the drug has been shown to abort a cluster headache within fifteen minutes in 96% of cases. [ [http://content.nejm.org/cgi/content/abstract/325/5/316 Treatment of acute cluster headache with sumatriptan. The Sumatriptan Cluster Headache Study Group. N Engl J Med 1991;325:322-6.] ] This type of headache is extremely painful and debilitating.

Sumatriptan is administered in several forms; tablets, , and nasal spray. Oral administration (as ) suffers from poor , partly due to presystemic &mdash; some of it gets broken down in the stomach and bloodstream before it reaches the target arteries. A new rapid-release tablet formulation has the same bioavailability, but the maximum concentration is achieved on average 10&ndash;15 minutes earlier. When injected, sumatriptan is faster acting (usually within 10 minutes), but the effect lasts for a shorter time. Sumatriptan is metabolised primarily by monoamine oxidase A into an analogue, part of which is further conjugated with . These metabolites are excreted in the urine and bile.

Large doses of sumatriptan (200 mg/day) can cause , a rare condition in which the blood changes from red to greenish-black, due to the integration of into the molecule [ [http://news.bbc.co.uk/2/hi/health/6733203.stm BBC NEWS | Health | Patient bleeds dark green blood ] ] . If sumatriptan is discontinued, the condition reverses within a few weeks.

Mylan Laboratories Inc. has received FDA approval for its generic version of Imitrex tablets in 25, 50, and 100 milligram doses. The drug will soon be available, or is already available, in European markets since Glaxo's patent protections have expired in those jurisdictions. However, sales of the generic drug are still restricted in the U.S. since Glaxo won an extension on their patent until 2009.