Fluvoxamine
Not to be confused with Fluoxetine.

Fluvoxamine is a potent and selective serotonin reuptake inhibitor with approximately 100-fold affinity for the serotonin transporter over the norepinephrine transporter. It has negligible affinity for the dopamine transporter or any other receptor, with the sole exception of the σ1 receptor. It behaves as a potent agonist at this receptor and has the highest affinity of any SSRI for doing so. This may contribute to its antidepressant and anxiolytic effects inside the brain. Indeed, other SSRIs which also act as σ1 receptor agonists, such as sertraline and escitalopram (not verified but likely to be), display enhanced antidepressant efficacy.[7] suggesting that it may have particular benefits in the treatment of depressed patients who show features of anxiety/stress and for whom memory impairment is particularly undesirable (such as in depressed elderly patients, and also in treating psychotic depression).[8] In fact, the TCA opipramol, a σ1 receptor agonist without effects on the serotonin, dopamine, or norepinephrine systems, has considerable antidepressant and anxiolytic efficacy in its own right.

The oral bioavailability of fluvoxamine is 53%. The plasma protein binding is about 80%.[9]

Radio-labeled administration of a dose of fluvoxamine produced nine identifiable metabolites, constituting 85% of the absorbed dosage (thus 15% of the fluvoxamine remained unchanged). This isolate of metabolites was empirically proven to contain 60% fluvoxamine acid and its N-acetyl analog, and 10% fluvoxethanol, with the other six metabolites making up 30%.[10]

Fluvoxamine has the shortest serum half-life of all SSRIs, with a mean of 15.6 hours.[11]

Fluvoxamine inhibits cytochrome P450 enzyme CYP1A2, which metabolises agomelatine, caffeine, clozapine, haloperidol, phenacetin, tacrine, theophylline, and olanzapine. These substances can cause increased serum levels when administered together with fluvoxamine. Of major concern is the fact that the polycyclic aromatic hydrocarbons found in tobacco smoke are potent inducers of CYP1A2 so that smokers may require significant modification of medication dosage.[12] A recent warning has been published regarding potentially serious interaction with tizanidine, based on CYP1A2 metabolism.[13] The half-life of caffeine is significantly extended by the use of fluvoxamine, which can cause insomnia and irritability in coffee drinkers.

Fluvoxamine has low potential for the drug interactions which are based on inhibition of enzyme Cytochrome P450 CYP2D6, less than most other SSRIs.[15][16][17] Naturally the other SSRIs which are metabolized by CYP2D6 will have more CYP2D6-based interactions with TCAs, antiarrhythmics, B-blockers, phenytoin, opioids and neuroleptics. 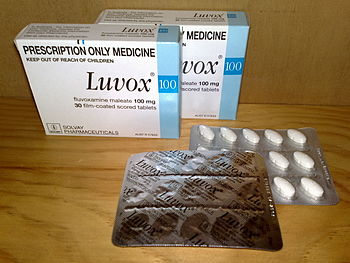 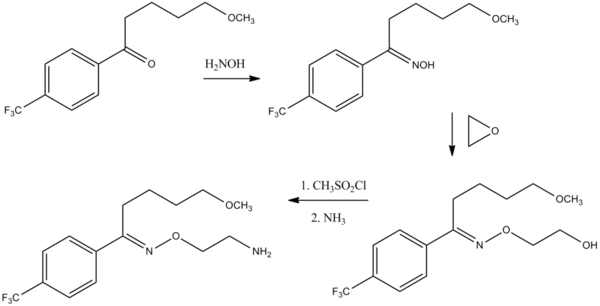 Fluvoxamine is one of only two SSRIs (along with alaproclate) to have a monocyclic structure.[19][20]

In 1999, fluvoxamine came under great public scrutiny after it was discovered that Eric Harris, one of the two teenage shooters involved in the Columbine High School massacre, had been taking the drug. Many immediately pointed fingers at fluvoxamine and its manufacturer Solvay Pharmaceuticals.[26] Sales fell, and Solvay withdrew the medication from the U.S. market in 2002.[27] In 2007, Solvay re-introduced Luvox to the U.S. market, which is now manufactured by Palo Alto, California-based Jazz Pharmaceuticals, Inc., with a generic version of Luvox available from IVAX Pharmaceuticals, Inc. On February 28, 2008, the FDA approved a controlled-release formulation of fluvoxamine for Solvay Pharmaceuticals, to be marketed as Luvox CR.[28][29]

The drug was given visibility in the American television series The Sopranos produced by HBO, in the second season, episode 10. Dr. Jennifer Melfi, the psychiatrist treating the character named Tony Soprano, is prescribed Luvox by her own psychiatrist, to treat a strong inclination toward alcohol.

"Stuttering" John Melendez, formerly of The Howard Stern Show, had taken Luvox for a period of time prior to his departure from the show.

One of two shooters at the Columbine High School massacre, Eric Harris, was taking Luvox. Some analysts, such as psychiatrist Peter Breggin, have argued that this medication may have contributed to Harris's actions. Breggin claimed that side-effects of these drugs include increased aggression, loss of remorse, depersonalization, and mania.