Phenelzine (Nardil, Nardelzine) is a non-selective and irreversible monoamine oxidase inhibitor (MAOI) of the hydrazine class which is used as an antidepressant and anxiolytic. Along with tranylcypromine and isocarboxazid, phenelzine is one of the few non-selective MAOIs still in widespread clinical use.

Phenelzine is used primarily in the treatment of major depressive disorder (MDD). Patients with depressive symptomology characterized as "atypical", "nonendogenous", and/or "neurotic", have been reported to respond particularly well to phenelzine.[1] The medication has also been found to be useful in patients who do not respond favorably to first and second-line treatments for depression, or are said to be "treatment-resistant".[2] In addition to being a recognized treatment for major depressive disorder, phenelzine has been found in studies to be effective in treating dysthymia,[3] bipolar depression (BD),[4] panic disorder (PD),[5] social anxiety disorder (SAD),[6] bulimia,[7] and post-traumatic stress disorder (PTSD).[8]

Phenelzine is a non-selective and irreversible inhibitor of the enzyme monoamine oxidase (MAO). It inhibits both of the respective isoforms of MAO, MAO-A and MAO-B, and does so almost equally, with slight preference for the former. By inhibiting MAO, phenelzine prevents the breakdown of the monoamine neurotransmitters serotonin, melatonin, norepinephrine, epinephrine, and dopamine, as well as the trace amine neuromodulators such as phenethylamine, tyramine, octopamine, and tryptamine. This leads to an increase in the extracellular concentrations of these neurochemicals and therefore an alteration in neurochemistry and subsequently neurotransmission. It is this action that is thought to be the primary mediator in phenelzine's therapeutic benefits.

Notably, although phenelzine inhibits the breakdown of norepinephrine and epinephrine (which in concept should lead to increased levels of these two respective neurotransmitters), it actually typically significantly decreases their overall activity with time via a complex interaction with octopamine. This is the cause of the side effect of orthostatic hypotension commonly seen with phenelzine and the other MAOIs. Importantly, it has been demonstrated that the antidepressant effects of serotonin are actually mediated through norepinephrine.[9] As a result, this depletion of norepinephrine and epinephrine may significantly inhibit the full therapeutic potential of phenelzine and the other MAOIs. For this reason, augmenting with an adrenergic agent such as a norepinephrine reuptake inhibitor (NRI) or releasing agent (NRA) in conjunction may be desirable, though strict professional supervision is advised to minimize the risk of a potentially dangerous drug interaction such as hypertensive crisis.

Phenelzine and its metabolites also inhibit at least two other enzymes to a lesser extent, of which are alanine transaminase (ALA-T),[10] and γ-Aminobutyric acid transaminase (GABA-T),[11] the latter of which is not caused by phenelzine itself, but by a phenelzine metabolite phenylethylidenehydrazine (PEH). By inhibiting ALA-T and GABA-T, phenelzine causes an increase in the alanine and GABA levels in the brain and body. GABA is the major inhibitory neurotransmitter in the mammalian central nervous system, and is very important for the normal suppression of anxiety and stress, as well as keeping depression at bay. It is thought that phenelzine's action in increasing GABA concentrations may significantly contribute to its antidepressant, and especially, anxiolytic/antipanic properties, the latter of which have typically been considered superior to those of other antidepressants. As for ALA-T inhibition, though the consequences of disabling this enzyme are currently not well understood, there is some evidence to suggest that it is this action of the hydrazines (including phenelzine) which may be responsible for the occasional incidence of hepatitis and liver failure.

Phenelzine has also been shown to metabolize to phenethylamine (PEA).[12] PEA acts as a releasing agent of norepinephrine and dopamine, and produces effects very similar to those of amphetamine, though with markedly different pharmacokinetics such as a far shorter duration of action. Phenelzine's enhancement of PEA levels may contribute further to its overall antidepressant effects to some degree. In addition, phenethylamine is a substrate for MAO-B, and treatment with MAOIs that inhibit MAO-B such as phenelzine have been shown to consistently and significantly elevate its concentrations.

Like many other antidepressants, phenelzine usually requires several weeks of treatment to achieve full therapeutic effects. The reason for this delay has not fully been elucidated, but it is believed to be due to many factors, including achieving steady-state levels of MAO inhibition and the resulting adaptations in mean neurotransmitter levels, as well as the possibility of necessary desensitization of autoreceptors which normally inhibit the release of neurotransmitters like serotonin and dopamine. Typically, a therapeutic response to MAOIs is believed to be associated with an inhibition of at least 80-85% of monoamine oxidase activity. 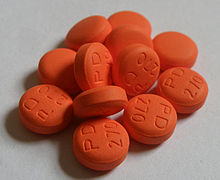 Phenelzine is administered orally in the form of phenelzine sulfate and is rapidly absorbed from the gastrointestinal tract. Time to peak plasma concentration is 43 minutes and half-life is 11.6 hours. Unlike most other drugs, phenelzine irreversibly disables MAO, and as a result, it does not necessarily need to be present in the blood at all times for its effects to be sustained. Because of this, upon phenelzine treatment being ceased, its effects typically do not actually wear off until the body replenishes its enzyme stores, a process which can take as long as 2–3 weeks.

Phenelzine is metabolized primarily in the liver and its metabolites are excreted in the urine. Oxidation is the primary routine of metabolism, and the major metabolites are phenylacetic acid and parahydroxyphenylacetic acid, recovered as about 73% of the excreted dose of phenelzine in the urine over the course of 96 hours after single doses. Acetylation to N2-acetylphenelzine is a minor pathway. Phenelzine may also interact with cytochrome P450 enzymes, inactivating these enzymes through formation of a heme adduct. Two other minor metabolites of phenelzine, as mentioned above, include phenylethylidenehydrazine and phenethylamine.

Phenelzine is made relatively easily through the reaction of 2-phenylethylbromide with hydrazine.[13][14][15]

The MAOIs are infamous for their problematic food restrictions and drug interactions. Hypertensive crisis may result from the overconsumption of tyramine-containing foods. As a result, patients on phenelzine and other MAOIs must avoid excess quantities of certain foods that contain tyramine such as aged cheeses and cured meats, among others. Serotonin syndrome may result from an interaction with certain drugs which increase serotonin activity such as selective serotonin reuptake inhibitors and pethidine (known as meperidine in the US). Several deaths have been reported due to drug interaction-related serotonin syndrome such as the case of Libby Zion.

Phenelzine has also been linked to vitamin B6 deficiency. It reacts with vitamin B6 via an unknown enzyme to form a biologically inert metabolite. Both phenelzine and vitamin B6 are rendered inactive upon this reaction occurring. For this reason, it is recommended to supplement with vitamin B6 while taking phenelzine. High doses of vitamin B6 may significantly lower phenelzine levels and subsequently inhibit its therapeutic benefits, however, and thus, excess quantities of vitamin B6 should be avoided. It may be advisable to dose them separately during opposite intervals of the day (e.g., take one, then take the other 12 hours later) to avoid interaction as much as possible.