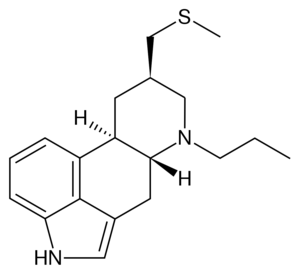 Pergolide is an -based used for the treatment of .

Parkinson's disease is associated with low levels of the in the brain. Pergolide has some of the same effects as dopamine in the body.

Furthermore, pergolide may also be used for veterinary purposes. It is commonly used for the treatment of pituitary hyperplasia or Equine Cushing's Syndrome (ECS) in horses. [cite web |url=http://www.wedgewoodpharmacy.com/monographs/pergolide.asp |title=Pergolide For Veterinary Use |author=Barbara Forney, VMD ]

The drug is in decreasing use, as it was reported in 2003 to be associated with a form of heart disease called . [cite journal | url = http://www.tga.gov.au/adr/aadrb/aadr0408.htm | year = 2004 | month = August | title = Cardiac valvulopathy with pergolide | author = ADRAC | journal = Aust Adv Drug React Bull | volume = 23 | issue = 4 [http://www.tga.gov.au/adr/aadrb/aadr0408.htm Free full text] from the n ] This problem is thought to be due to pergolide's action at the 5-HT2B serotonin receptors of cardiac myocytes, causing proliferative valve disease by the same mechanism as , , , and other serotonin 5-HT2B agonists, including serotonin itself when elevated in the blood in . Pergolide can rarely cause . Among similar antiparkinsonian drugs, but not exhibit this same type of serotonin receptor binding. [ Jähnichen S, Horowski R, Pertz H. PDFlink| [http://userpage.fu-berlin.de/~hpertz/Presentation001.pdf "Pergolide and Cabergoline But not Lisuride Exhibit Agonist Efficacy at Serotonin 5-HT2B Receptors".] |515 KiB Presentation. Retrieved on .] In January, 2007, (Dostinex) was reported also to be associated with valvular proliferation heart damage. [cite journal |author=Schade R, Andersohn F, Suissa S, Haverkamp W, Garbe E |title=Dopamine agonists and the risk of cardiac-valve regurgitation |journal=N Engl J Med |volume=356 |issue=1 |pages=29&ndash;38 |year=2007 |pmid=17202453 |doi=10.1056/NEJMoa062222] In March 2007, pergolide was withdrawn from the U.S. market due to serious valvular damage that was shown in two independent studies.

On March 30th, 2007, manufacturers of Pergolide agreed to withdraw the drug from the U.S. market after several published studies revealed a link between the drug and increased rates of valvular dysfunction. [ [http://www.medscape.com/viewarticle/554347?sssdmh=dm1.259053&src=ddd Pergolide Withdrawn From US Market] ] However, Pergolide is still available in many other countries including Canada.