Parathion, also called parathion-ethyl or diethyl parathion, is an organophosphate compound. It is a potent insecticide and acaricide. It was originally developed by IG Farben in the 1940s. It is highly toxic to non-target organisms, including humans. Its use is banned or restricted in many countries, and there are proposals to ban it from all use. Closely related is "methyl parathion" (see below). 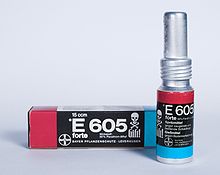 Parathion was developed by Dr. Gerhard Schrader for the German trust IG Farben in the 1940s. After the war and the collapse of IG Farben due to the war crime trials, the Western allies seized the patent, and parathion was marketed worldwide by different companies and under different brand names. The most common German brand was E605 (banned in Germany after 2002); this was not a food-additive "E number" as used in the EU today. "E" stands for Entwicklungsnummer (German for "development number").

When pure, parathion is a white crystalline solid, however it is commonly distributed as a brown liquid that smells of rotting eggs or garlic. The insecticide is more or less stable, although it darkens when exposed to sunlight.

As a pesticide, parathion is generally applied by spraying. It is often applied to cotton, rice and fruit trees. The usual concentrations of ready-to-use solutions are 0.05 to 0.1%. The chemical is banned for use on many food crops.

Parathion acts on the enzyme acetylcholinesterase, but indirectly. After being ingested by insects (and unintentionally, by humans), the parathion becomes oxidized by oxidases to give paraoxon, replacing the double bonded sulfur with oxygen.[2]

The phosphate ester is more reactive in organisms than the phosphorothiolate ester, as the phosphorus atoms become much more electronegative.[2]

Degradation of parathion leads to more water soluble products. Hydrolysis, which deactivates the molecule, occurs at the aryl ester bond resulting in diethyl thiophosphate and 4-nitrophenol.[2]

Degradation proceeds differently under anaerobic conditions: the nitro group on parathion is reduced to the amine.

Parathion is a cholinesterase inhibitor. It generally disrupts the nervous system by inhibiting the acetylcholinesterase. It is absorbed via skin, mucous membranes, and orally. Absorbed parathion is rapidly metabolized to paraoxon, as described above. Paraoxon exposure can result in headaches, convulsions, poor vision, vomiting, abdominal pain, severe diarrhea, unconsciousness, tremor, dyspnea, and finally lung-edema as well as respiratory arrest. Symptoms of poisoning are known to last for extended periods of time, sometimes months. The most common and very specific antidote is atropine in doses of up to 100 mg daily. Because atropine may also be toxic, it is recommended that small frequently repeated doses be used in treatment. If human poisoning is detected early and the treatment is prompt (atropine and artificial respiration), fatalities are infrequent. Insufficient oxygen will lead to cerebral hypoxia and permanent brain damage. Peripheral neuropathy including paralysis is noticed as late sequelae after recovery from acute intoxication. Parathion has been used for committing suicide and deliberately poisoning other persons. It is known as "Schwiegermuttergift" (mother-in-law poison) in Germany. For this reason most formulations contain a blue dye providing warning.

Parathion has been used as a chemical weapon, most notably by the Selous Scouts during the Rhodesian Bush War.[3]

Based on animal studies, parathion is considered by the U.S. Environmental Protection Agency‎ to be a possible human carcinogen.[4] Studies show that parathion is toxic to fetuses, but does not cause birth defects.[5]

It is classified as a UNEP Persistent Organic Pollutant and WHO Toxicity Class, "Ia, Extremely Hazardous".

Parathion is very toxic to bees, fish, birds, and other forms of wildlife.[5] Parathion can be replaced by many safer and less toxic alternatives (less toxic organophosphates, carbamates, or synthetic pyrethroids).

To assure human protection the end user must wear protective gloves, clothing, and a respirator of the organic-vapour. Industrial safety during the production process requires special ventilation and continuous measurement of air contamination in order not to exceed PEL levels as well as keeping personal hygiene. Frequent determination of workers' serum acetylcholinesterase activity is also helpful in regards of occupational safety, because the action of parathion is cumulative. If an area of the body is contaminated with parathion, if possible, it should be removed immediately. Also, atropine has been used as a specific antidote.

According to the non-governmental organisation Pesticide Action Network or PAN, parathion is one of the most dangerous pesticides. This organization lists parathion also as a 'bad actor chemical'.[6] In the US alone more than 650 agricultural workers have been poisoned since 1966, of which 100 died. In underdeveloped countries many more people have suffered fatal and nonfatal intoxications. The World Health Organization, PAN and numerous environmental organisations propose a general and global ban. Its use is banned or restricted in 23 countries and its import is illegal in a total of 50 countries.[6]