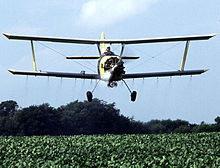 Pest control refers to the regulation or management of a species defined as a pest, usually because it is perceived to be detrimental to a person's health, the ecology or the economy.

Pest control is at least as old as agriculture, as there has always been a need to keep crops free from pests. In order to maximize food production, it is advantageous to protect crops from competing species of plants, as well as from herbivores competing with humans.

The conventional approach was probably the first to be employed, since it is comparatively easy to destroy weeds by burning them or plowing them under, and to kill larger competing herbivores, such as crows and other birds eating seeds. Techniques such as crop rotation, companion planting (also known as intercropping or mixed cropping), and the selective breeding of pest-resistant cultivars have a long history.

In the UK, following concern about animal welfare, humane pest control and deterrence is gaining ground through the use of animal psychology rather than destruction. For instance, with the urban Red Fox which territorial behaviour is used against the animal, usually in conjunction with non-injurious chemical repellents. In rural areas of Britain, the use of firearms for pest control is quite common. Airguns are particularly popular for control of small pests such as rats, rabbits and grey squirrels, because of their lower power they can be used in more restrictive spaces such as gardens, where using a firearm would be unsafe. 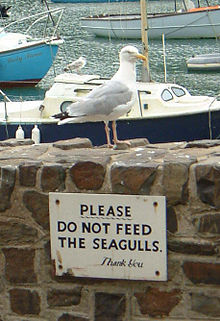 Many pests have only become a problem because of the direct actions of humans. Modifying these actions can often substantially reduce the pest problem. In the United States, raccoons caused a nuisance by tearing open refuse sacks. Many householders introduced bins with locking lids, which deterred the raccoons from visiting. House flies tend to accumulate wherever there is human activity and is virtually a global phenomenon, especially where food or food waste is exposed. Similarly, seagulls have become pests at many seaside resorts. Tourists would often feed the birds with scraps of fish and chips, and before long, the birds would become dependent on this food source and act aggressively towards humans.

Living organisms evolve and increase their resistance to biological, chemical, physical or any other form of control. Unless the target population is completely exterminated or is rendered incapable of reproduction, the surviving population will inevitably acquire a tolerance of whatever pressures are brought to bear - this results in an evolutionary arms race.

Biological pest control is the control of one through the control and management of natural predators and parasites. For example: mosquitoes are often controlled by putting Bt Bacillus thuringiensis ssp. israelensis, a bacterium that infects and kills mosquito larvae, in local water sources. The treatment has no known negative consequences on the remaining ecology and is safe for humans to drink. The point of biological pest control, or any natural pest control, is to eliminate a pest with minimal harm to the ecological balance of the environment in its present form.[1]

Proper waste management and drainage of still water, eliminates the breeding ground of many pests.

Garbage provides food and shelter for many unwanted organisms, as well as an area where still water might collect and be used as a breeding ground by mosquitoes. Communities that have proper garbage collection and disposal, have far less of a problem with rats, cockroaches, mosquitoes, flies and other pests than those that don't.

Open air sewers are ample breeding ground for various pests as well. By building and maintaining a proper sewer system, this problem is eliminated.

Poisoned bait is a common method for controlling rat populations, however is not as effective when there are other food sources around, such as garbage. Poisoned meats have been used for centuries for killing off wolves, birds that were seen to threaten crops, and against other creatures. this tool is also used to manage several caterpillars eg.Spodoptera litura,fruit flies,snails and slugs,crabs etc..

Traditionally, after a sugar cane harvest, the fields are all burned, to kill off any insects or eggs that might be in the fields.

Historically, in some European countries, when stray dogs and cats became too numerous, local populations gathered together to round up all animals that did not appear to have an owner and kill them. In some nations, teams of rat catchers work at chasing rats from the field, and killing them with dogs and simple hand tools. Some communities have in the past employed a bounty system, where a town clerk will pay a set fee for every rat head brought in as proof of a rat killing.

Traps have been used for killing off mice found in houses, for killing wolves, and for capturing raccoons and stray cats and dogs for disposal by town officials.

Spraying poisons by planes, hand held units, or trucks that carry the spraying equipment, is a common method of pest control. Throughout the United States of America, towns often drive a town owned truck around once or twice a week to each street, spraying for mosquitoes. Crop dusters commonly fly over farmland and spray poison to kill off pest that would threaten the crops. Many find spraying poison around their yard, homes, or businesses, far more desirable than allowing insects to thrive there.

A project that involves a structure be covered or sealed airtight followed by the introduction of a penetrating, deadly gas at a killing concentration a long period of time (24-72hrs.). Although expensive, space fumigation targets all life stages of pests.[2]

A long term project involving fogging or misting type applicators. Liquid insecticide is dispersed in the atmosphere within a structure. Treatments do not require the evacuation or airtight sealing of a building, allowing most work within the building to continue but at the cost of the penetrating effects. Contact insecticides are generally used, minimizing the long lasting residual effects. On August 10, 1973, the Federal Register printed the definition of Space treatment as defined by the U.S. Environmental Protection Agency‎ (EPA):[2]

Laboratory studies conducted with U-5897 (3-chloro-1,2-propanediol) where attempted in the early 1970s although these proved unsuccessful.[3] Research into sterilization bait is ongoing.

Another effective method of soil sterilization is soil steaming. Pest is killed through hot steam which is induced into the soil.

The United States Environmental Protection Agency‎ agrees, noting in its Proposed Risk Mitigation Decision for Nine Rodenticides that “without habitat modification to make areas less attractive to commensal rodents, even eradication will not prevent new populations from recolonizing the habitat.”[5]