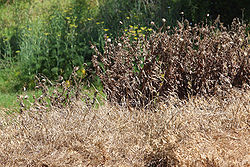 Herbicides, also commonly known as weedkillers, are pesticides used to kill unwanted plants.[1] Selective herbicides kill specific targets while leaving the desired crop relatively unharmed. Some of these act by interfering with the growth of the weed and are often synthetic "imitations" of plant hormones. Herbicides used to clear waste ground, industrial sites, railways and railway embankments are non-selective and kill all plant material with which they come into contact. Smaller quantities are used in forestry, pasture systems, and management of areas set aside as wildlife habitat.

Herbicides are widely used in agriculture and in landscape turf management. In the U.S., they account for about 70% of all agricultural pesticide use.[1]

The first widely used herbicide was 2,4-dichlorophenoxyacetic acid, often abbreviated 2,4-D.[2] It was first commercialized by the paint company Sherwin-Williams and saw use in the late 1940s. It is easy and inexpensive to manufacture, and kills many broadleaf plants while leaving grasses largely unaffected, although high doses of 2,4-D at crucial growth periods can harm grass crops such as maize or cereals. The low cost of 2,4-D has led to continued usage today and it remains one of the most commonly used herbicides in the world. Like other acid herbicides, current formulations utilize either an amine salt (often trimethylamine) or one of many esters of the parent compound. These are easier to handle than the acid.

2,4-D exhibits relatively good selectivity, meaning, in this case, that it controls a wide number of broadleaf weeds while causing little to no injury to grass crops at normal use rates. An herbicide is termed selective if it affects only certain types of plants, and nonselective if it inhibits a very broad range of plant types. Other herbicides have been more recently developed that achieve higher levels of selectivity than 2,4-D.

The 1950s saw the introduction of the triazine family of herbicides, which includes atrazine, which have current distinction of being the herbicide family of greatest concern regarding groundwater contamination. Atrazine does not break down readily (within a few weeks) after being applied to soils of above neutral pH. Under alkaline soil conditions atrazine may be carried into the soil profile as far as the water table by soil water following rainfall causing the aforementioned contamination. Atrazine is thus said to have carryover, a generally undesirable property for herbicides.

Glyphosate, frequently sold under the brand name Roundup, was introduced in 1974 for non-selective weed control. It is now a major herbicide in selective weed control in growing crop plants due to the development of crop plants that are resistant to it. The pairing of the herbicide with the resistant seed contributed to the consolidation of the seed and chemistry industry in the late 1990s.

Many modern chemical herbicides for agriculture are specifically formulated to decompose within a short period after application. This is desirable as it allows crops which may be affected by the herbicide to be grown on the land in future seasons. However, herbicides with low residual activity (i.e., that decompose quickly) often do not provide season-long weed control.

Herbicides have widely variable toxicity. In addition to acute toxicity from high exposures there is concern of possible carcinogenicity[3] as well as other long-term problems such as contributing to Parkinson's disease.

Some herbicides cause a range of health effects ranging from skin rashes to death. The pathway of attack can arise from intentional or unintentional direct consumption, improper application resulting in the herbicide coming into direct contact with people or wildlife, inhalation of aerial sprays, or food consumption prior to the labeled pre-harvest interval. Under extreme conditions, herbicides can also be transported via surface runoff to contaminate distant water sources. Most herbicides decompose rapidly in soils via soil microbial decomposition, hydrolysis, or photolysis.

Phenoxy herbicides are often contaminated with dioxins such as TCDD; research suggested that such contamination results in a small rise in cancer risk after exposure to these herbicides.[4] Triazine exposure has been implicated in a likely relationship to increased risk of breast cancer, although a causal relationship remains unclear.[5]

Herbicide manufacturers have at times made false or misleading claims about the safety of their products. Chemical manufacturer Monsanto Company agreed to change its advertising after pressure from New York attorney general Dennis Vacco; Vacco complained about misleading claims that its spray-on glyphosate based herbicides, including Roundup, were safer than table salt and "practically non-toxic" to mammals, birds, and fish.[6] Roundup is toxic and has resulted in death after being ingested in quantities ranging from 85 to 200 mL, although it has also been ingested in quantities as large as 500 mL with only mild or moderate symptoms.[7] The manfucturer of Tordon 101 (Dow AgroSciences, owned by the Dow Chemical Company) has claimed that Tordon 101 has no effects on animals and insects,[8] in spite of evidence of strong carcinogenic activity of the active ingredient[9] Picloram in studies on rats.[10]

All commercially-sold, organic and non-organic herbicides must be extensively tested prior to approval for sale and labeling by the Environmental Protection Agency. However, because of the large number of herbicides in use, there is significant concern regarding health effects. In addition to health effects caused by herbicides themselves, commercial herbicide mixtures often contain other chemicals, including inactive ingredients, which have negative impacts on human health. For example, Roundup contains adjuvants which, even in low concentrations, were found to kill human embryonic, placental, and umbilical cells in vitro.[13] One study also found that Roundup caused genetic damage, but found that the damage was not caused by the active ingredient.[14]

Commercial herbicide use generally has negative impacts on bird populations, although the impacts are highly variable and often require field studies to predict accurately. Laboratory studies have at times overestimated negative impacts on birds due to toxicity, predicting serious problems that were not observed in the field.[15] Most observed effects are due not to toxicity but to habitat changes and the decrease in abundance of species birds rely on for food or shelter. Herbicide use in silviculture, used to favor certain types of growth following clearcutting, can cause significant drops in bird populations. Even when herbicides are used which have low toxicity to birds, the herbicides decrease the abundance of many types of vegetation which the birds rely on.[16] Herbicide use in agriculture in Britain has been linked to a decline in seed-eating bird species which rely on the weeds killed by the herbicides.[17] Heavy use of herbicides in neotropical agricultural areas has been one of many factors implicated in limiting the usefulness of such agricultural land for wintering migratory birds.[18]

The health and environmental effects of many herbicides is unknown, and even within the scientific community there is often disagreement on the risk. For example, a 1995 panel of 13 scientists reviewing studies on the carcinogenicity of 2,4-D had divided opinions on the likelihood that 2,4-D causes cancer in humans.[19] As of 1992[update], there were too few studies on phenoxy herbicides to accurately assess the risk of many types of cancer from these herbicides, even though evidence was stronger that exposure to these herbicides is associated with increased risk of soft tissue sarcoma and non-Hodgkin lymphoma.[3]

Scientists generally agree that selection pressure applied to weed populations for a long enough period of time eventually leads to resistance. Plants have developed resistance to Atrazine and to ALS-inhibitors, and more recently, to glyphosate herbicides. Marestail is one weed that has developed glyphosate resistance.[20]

Herbicides can be grouped by activity, use, chemical family, mode of action, or type of vegetation controlled.

Their classification by mechanism of action (MOA) indicates the first enzyme, protein, or biochemical step affected in the plant following application. The main mechanisms of action are:

Recently the term organic has come to imply products used in organic farming. Under this definition an organic herbicide is one that can be used in a farming enterprise that has been classified as organic. Commercially-sold organic herbicides are expensive and may not be affordable for commercial farming.[citation needed] Depending on the application, they may be less effective than synthetic herbicides and are generally used along with cultural and mechanical weed control practices.

Most herbicides are applied as water-based sprays using ground equipment. Ground equipment varies in design, but large areas can be sprayed using self-propelled sprayers equipped with a long boom, of 60 to 80 feet (18 to 24 m) with flat fan nozzles spaced about every 20 inches (510 mm). Towed, handheld, and even horse-drawn sprayers are also used.

Synthetic organic herbicides can generally be applied aerially using helicopters or airplanes, and can be applied through irrigation systems (chemigation).

A new method of herbicide application involves ridding the soil of its active weed seed bank rather than just killing the weed. Researchers at the Agricultural Research Service have found that applying herbicides to fields late in the weed’s growing season greatly reduces its seed production, and therefore fewer weeds will return the following season. If herbicides are applied at the correct stage in the weed’s growing season, then the weed’s presence in the soil seed bank will greatly be reduced. Because most weeds are annual grasses, their seeds will only survive in soil for a year or two, so this method will be able to “weed out” the weed with only a few years of herbicide application.[28]

Weed-wiping may also be used, where a wick wetted with herbicide is suspended from a boom and dragged or rolled across the tops of the taller plants. This allows treatment of taller grassland weeds by direct contact without affecting related but desirable plants in the grassland sward beneath.