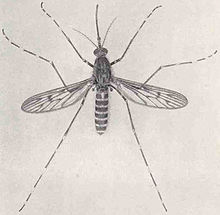 Mosquitos are generally considered annoying and may also transmit diseases, thus leading to a variety of human efforts to eradicate or reduce their presence.

Mosquito control manages the population of mosquitoes to reduce their damage to human health, economies, and enjoyment. Mosquito control is a vital public-health practice throughout the world and especially in the tropics because mosquitoes spread many diseases, such as malaria.

Depending on the situation, source reduction, biocontrol, larviciding (control of larvae), or adulticiding (control of adults) may be used to manage mosquito populations. These techniques are accomplished using habitat modification, pesticide, biological-control agents, and trapping.

Adult mosquito populations may be monitored via landing rate counts, or mechanical traps. For landing rate counts, an inspector visits a set number of sites every day, counting the number of adult female mosquitoes that land on a part of the body, such as an arm or both legs, within a given time interval. Mechanical traps use a fan to blow adult mosquitoes into a collection bag that is taken back to the laboratory for analysis of catch. The mechanical traps use visual cues (light, black/white contrasts) or chemical attractants that are normally given off by mosquito hosts (e.g. carbon dioxide, ammonia, lactic acid, octenol) to attract adult female mosquitoes. These cues are often used in combination.

Monitoring larval mosquito populations involves collecting larvae from standing water with a dipper or a turkey baster. The habitat, approximate total number of larvae and pupae, and species are noted for each collection.

Since many mosquitoes breed in standing water, source reduction can be as simple as emptying water from containers around the home. This is something that homeowners can accomplish. For example, homeowners can eliminate mosquito breeding grounds by removing unused plastic pools, old tires, or buckets; by clearing clogged gutters and repairing leaks around faucets; by regularly changing water in bird baths; and by filling or draining puddles, swampy areas, and tree stumps. Eliminating such mosquito breeding areas can be an extremely effective and permanent way to reduce mosquito populations without resorting to insecticides.[1] However, this may not be possible in parts of the developing world where water cannot be readily replaced due to irregular water supply[citation needed].

Open water marsh management (OWMM) involves the use of shallow ditches, about 4 feet (1.2 m) wide and 2 feet (0.61 m) deep, to create a network of water flow within marshes and to connect the marsh to a pond or canal. The network of ditches drains the mosquito habitat and lets in fish which will feed on mosquito larvae. This reduces the need for other control methods such as pesticides. Simply giving the predators access to the mosquito larvae can result in long-term mosquito control.[2] Open-water marsh management is used on both the eastern and western coasts of the United States.

Rotational impoundment management (RIM) involves the use of large pumps and culverts with gates to control the water level within an impounded marsh. RIM allows mosquito control to occur while still permitting the marsh to function in a state as close to its natural condition as possible. Water is pumped into the marsh in the late spring and summer to prevent the female mosquito from laying her eggs on the soil. The marsh is allowed to drain in the fall, winter, and early spring. Gates in the culverts are used to permit fish, crustaceans, and other marsh organisms to enter and exit the marsh. RIM allows the mosquito-control goals to be met while at the same time reducing the need for pesticide use within the marsh. Rotational impoundment management is used to a great extent on the east coast of Florida.

Biological control or "biocontrol" is the use of natural enemies to manage mosquito populations. There are several types of biological control including the direct introduction of parasites, pathogens and predators to target mosquitoes. Effective biocontrol agents include predatory fish that feed on mosquito larvae such as mosquitofish (Gambusia affinis) and some cyprinids (carps and minnows) and killifish. Tilapia will also consume mosquito larvae.[3]

Other predators include dragonfly naiads, which consume mosquito larvae in the breeding waters, and adult dragonflies, which eat adult mosquitoes. Some other biocontrol agents that have had lesser degrees of success include the predator mosquito Toxorhynchites and predator crustaceans—Mesocyclops copepods,[4] nematodes, and fungi.[5] Some public agencies also employ other predators such as birds, bats, lizards and frogs, but evidence of effectiveness of these agents is only anecdotal.

Like all animals, mosquitoes have their own set of diseases. Invertebrate pathologists study these diseases in the hope that some of them can be utilized for mosquito management. Microbial pathogens of mosquitoes include viruses, bacteria, fungi, protozoa, nematodes, and microsproidia (Davidson 1981, Jahn 1986)

Also used as biological control agent are the dead spores of varieties of the natural soil bacterium Bacillus thuringiensis, especially Bt israelensis (BTI). BTI is used to interfere in the digestion systems of larvae. It can be dispersed by hand or dropped by helicopter in large areas. BTI is no longer effective after the larvae turn into pupae, because they stop eating.

Integrated pest management (IPM) is the use of the most environmentally appropriate method or combination of methods to control pest populations. Typical mosquito-control programs using IPM first conduct larval and adult surveys, in order to determine the species composition, relative abundance, and seasonal distribution of adult and larval mosquitoes, and only then are the best and most effective methods of control utilized.

West Nile virus and Encephalitis are spread by mosquitoes and they continue to be a problem in the United States.[6]

Control of larvae can be accomplished through use of contact poisons, growth regulators, surface films, stomach poisons (including bacterial agents), and biological agents such as fungi, nematodes, copepods, and fish.[7] A chemical commonly used in the United States is methoprene, considered slightly toxic to larger animals, which mimics and interferes with natural growth hormones in mosquito larvae, preventing development. Methoprene is frequently distributed in time-release briquette form in breeding areas.

It is believed by some researchers that the larvae of Anopheles gambiae (important vectors of malaria) can survive for several days on moist mud, and that treatments should therefore include mud and soil several meters from puddles.[8]

In 1958, the National Malaria Eradication Program implemented the wide-scale use of DDT for mosquito control.

Control of adult mosquitoes is the most familiar aspect of mosquito control to most of the public. It is accomplished by ground-based applications or via aerial application of chemical pesticides. Generally modern mosquito-control programs in developed countries use low-volume applications of pesticides, although some programs may still use thermal fogging.

DDT was formerly used throughout the world for large area mosquito control, but it is now banned in most developed countries.

Controversially, DDT remains in common use in many developing countries, which claim that the public-health cost of switching to other control methods would exceed the harm caused by using DDT. It is sometimes approved for use only in specific, limited circumstances where it is most effective, such as application to walls.

The role of DDT in combating mosquitoes has been the subject of considerable controversy. While some[weasel words] argue that DDT deeply damages biodiversity, others argue that DDT is the most effective weapon in combating mosquitoes, and hence malaria. While some of this disagreement is based on differences in the extent to which disease control is valued as opposed to the value of biodiversity[citation needed], there is also genuine disagreement amongst experts about the costs and benefits of using DDT[dubious – discuss].

Notwithstanding, DDT-resistant mosquitoes have started to increase in numbers, especially in tropics due to mutations, reducing the effectiveness of this chemical; these mutations can rapidly spread over vast areas if pesticides are applied indiscriminately (Chevillon et al. 1999).

A light trap that attracts and captures mosquitos.

A newer approach to killing mosquitoes in a non-toxic way is to use a device that burns propane, thus generating carbon dioxide, warmth, and water vapor. These three elements, often coupled with a chemical attractant heated in this process, draws the mosquitoes toward the propane flame, where they are then sucked into a net or holder where they collect.

Some newer mosquito traps or known mosquito attractants emit a plume of carbon dioxide together with other mosquito attractants such as sugary scents, lactic acid, octenol, warmth, water vapor and sounds.[9] By mimicking a mammal’s scent and outputs, the trap draws female mosquitoes toward it, where they are typically sucked into a net or holder by an electric fan where they are collected. According to the American Mosquito Control Association,[10] "these devices will, indeed, trap and kill measurable numbers of mosquitoes," but their effectiveness in any particular case will depend on a number of factors such as the size and species of the mosquito population and the type and location of the breeding habitat. They are useful in specimen collection studies to determine the types of mosquitoes prevalent in an area but are typically far too inefficient to be useful in reducing mosquito populations.

The advantage of non-toxic methods of control is they can be used in Conservation Areas.

A traditional approach in control mosquito populations is the use of lethal Ovitrap by providing artificial breeding spots for the mosquitoes but destroying the developing larvae.

The latest approach is the automatic lethal ovitrap which works like a traditional ovitrap but automates all steps needed to provide the breeding spots and to destroy the developing larvae.[citation needed]

Scientists have created male mosquitoes which were spermless and are experimenting with methods of introducing the sterile males into the environment in the hope of reducing overall mosquito numbers.[11]