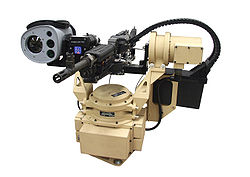 The Common Remotely Operated Weapon Station program, (CROWS or CROWS II) is a remote weapon station that provides the operator with the ability to acquire and engage targets while inside a vehicle, protected by its armor. It is designed to mount on a variety of vehicle platforms and supports the MK19 Grenade Machine Gun, .50 Caliber M2 Machine Gun, M240B Machine Gun, and M249 Squad Automatic Weapon.

Suppliers for the CROWS program

The first supplier for the CROWS program was Recon Optical (Barrington, IL, USA) with their RAVEN SRWS product.[1]

After an open solicitation Kongsberg Defence & Aerospace (Kongsberg, Norway and Johnstown, PA, USA) won the CROWS II contract with a variant of their M151 PROTECTOR, which is also used on the Stryker M1126 Infantry Carrier Vehicle.[2][3] KONGSBERG received a frame-contract of more than 1 billion USD for the delivery of up to 6,500 CROWS systems to the US Army and a first purchase order exceeding 300 million USD[4] As of October 2009, the framework contract has been almost completely converted to fixed contracts.[5] At the very end of 2009 the agreement was extended to include 10,349 systems[6] 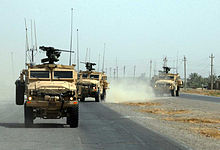 The CROWS is composed of two parts: the mount which is fixed to the exterior of the vehicle and the control group. The mount is capable of 360 degree azimuth rotation and −20 to +60 degree elevation. It is gyro-stabilized. It accepts a variety of crew-served weapons, including the M2 .50-cal Machine Gun, the Mk19 40-mm Automatic Grenade Machine Gun, the M240B 7.62 mm Machine Gun and M249 Squad Automatic Weapon.[7] The sensor unit includes a daylight video camera, a thermal imager for night operations and an eye-safe laser rangefinder. It is also furnished with a fully integrated fire control system that provides ballistic correction.[8] The weight of the weapon station varies accordingly due to different armament modules: 74 kg (163 lb) light, 135 kg (298 lb) standard (including the naval version), and 172 kg (379 lb) for CROWS II.

The CROWS control group mounts inside the vehicle (behind the driver's seat on the Humvee). It includes a display, switches and joystick to provide full remote control of the weapon system. This enables the fighting crew to operate from inside armored combat vehicles, while still carrying out patrols, acquiring targets, and firing a variety of weapons more efficiently.[9]

The first RAVEN units as part of the first CROWS contract were fielded in 2004 in Iraq, employed by special forces, military police, infantry and transport units. So far, more than 200 units have been fielded.[10]

The XM153 CROWS II has been delivered in huge quantities and more than a thousand systems are fielded.[11] Thus far, it has been employed on M1 Abrams main battle tanks, various versions of the Humvee, Buffalo MRVs, RG-31 Nyalas, RG-33s,the Army's M1126 Stryker APC, and soon to be integrated into the MATVs, JERRVs, Caiman, and MaxxPro.[7]