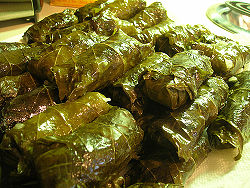 Dolma is a family of stuffed vegetable dishes in the cuisines of the former Ottoman Empire and surrounding regions such as Russia, Middle East and the Caucasus and Central and South Asia. Perhaps the best-known is the grape-leaf dolma. Common vegetables to stuff include onion, zucchini, eggplant, tomato and pepper. The stuffing may or may not include meat. Meat dolma are generally served warm, often with sauce; meatless ones are generally served cold, though meatless dolma are eaten both ways in Iran. Both are often eaten with yogurt.

The filling generally consists of rice, minced meat or grain. In either case, the filling includes onion, parsley, herbs and spices. Meatless fillings are cooked with olive oil and include raisins or currants, onion, nuts or pulses. 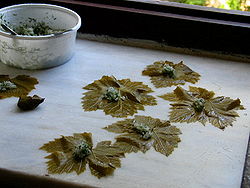 Dolma is a verbal noun of the Turkish verb dolmak, 'to be stuffed', and means 'stuffed thing'.[1][2]

Dolma is a stuffed vegetable, that is, a vegetable that is hollowed out and filled with stuffing. This applies to courgette, tomato, pepper, eggplant, and the like; stuffed mackerel, squid, and mussel are also called dolma. Dishes involving wrapping leaves such as vine leaves or cabbage leaves around a filling are called sarma though in many languages, the distinction is usually not made. Sarma is derived from the Turkish verb sarmak which means 'to wrap'. Other variants derive from the Turkish word for 'leaf', yaprak.

Dolma cooked with olive oil without minced meat is sometimes called yalancı which means 'liar' or 'fake' in Turkish.[3] It is 'fake' because it does not contain meat.[citation needed]

In some countries, the usual name for the dish is a borrowing of dolma or yaprak (meaning 'leaf' in Turkish), in others it is a calque, and sometimes the two coexist with distinct meanings: Albanian: japrak; Arabic: محشي (maḥshi, 'stuffed') or دولمة (dolma), محشي ورق عنب (maḥshī waraq 'inab, 'stuffed grape leaf'); Kurdish: dolma (دۆلمە), yaprakh(یاپراخ). In Aleppo, the word yabraq (يبرق) refers to stuffed vine leaves, while maḥshī (محشي) refers to stuffed cabbage leaves and stuffed vegetables.

Among Albanians, minced meat (usually beef), rice and sliced potatoes are cooked in spices (salt, pepper, vegeta, paprika), folded into large leaves of steamed or boiled collard greens, then baked. There are other variations depending on personal taste and availability. White cabbage is used mainly among Albanians in Kosovo, whereas Albanians in Montenegro use alternately collard greens or white cabbage. In Kosovo, this dish is known as "sarma." 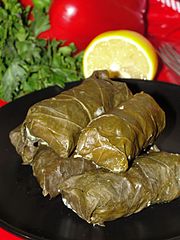 In Armenian cuisine, minced lamb meat or beef is mixed with rice and wrapped into grape leaves (tpov tolma - թփով տոլմա) or occasionally in cabbage leaves (kaghambi tolma - կաղամբի տոլմա). This dish is condimented with coriander, dill, mint, pepper, cinnamon and melted butter. Sometimes chestnuts and peas are part of the mix. Yogurt with garlic is often used as a sauce. Eggplants, potatoes, tomatoes, peppers, onions, quince and apples are also stuffed with lamb meat or beef and also called dolma. Echmiadzin tolma utilizes eggplants, green peppers, tomatoes, apples, and quinces. There are varying styles of how dolma is made. In Armenia Tholme usually served with matsun with crushed garlic. To prepare the dish, the meat used in dolma is: pork, beef and a little lamb. Also be sure to use herbs basil, oregano, tarragon. When cooking dolma it is necessary to take the most delicate and young leaves. There is also a pasuts dolma - lean dolma, a stuffing that includes lentils, red kidney beans, peas, wheat grits, fried onions, tomato paste. Usually the three vegetables are cooked at the same time in the same pan. Sometimes people add split peas to the filling, but it is only a matter of taste and is therefore optional. Also, eggplant shells are prepared in various ways before they are stuffed. Some blanch them in boiling water, some fry, some make a slit alongside the vegetable, some simply cut off the hat, scoop out the flesh and fill up the cavity with the stuffing. 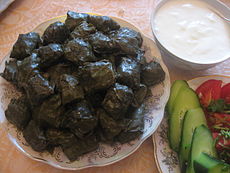 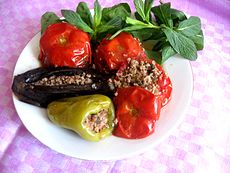 In Cyprus stuffed vine leaves are called koupepia (Greek). Greek Cypriots call the rest of the stuffed vegetables either gemista (which means something stuffed in Greek) or dolmades (as a plural for dolma). When they stuff with spices and rice, they call them pseftika (fake) and this is done either for fasting or especially when they stuff zucchini flowers.

In Egypt, dolma is called Mahshi Wara' inab. Unlike other Levant or Turkic countries, dolma in Egypt is eaten hot, not as an appetizer, but could be part of a main dish. It usually has a certain mixture (khaltat wara' inab) that is made of rice, tomato sauce, and little chops of onions and parsley as a stuffing. Dolma in Egypt, unlike other countries, is very small, that you could eat two in one bite. Not only grape leaves are used to make wara' inab in Egypt, but also tomatoes, eggplants, zucchini, and cabbage. They also use lettuce, but they cook the stuffing only, not the lettuce then wrap it. Potatoes and artichokes are used, but aren't stuffed with the khaltat wara' inab, but they are stuffed with mixture of mutton and tomato sauce, potatoes and artichokes (mahsi bataatis and mahshi kharshouf) aren't a preferred type of mahshi for vegetarians.

In Iraq, the mixture of ground lamb or beef with rice is usually made with many different fillings in the same preparing pot, as well as pomegranate juice, prominently used by the Kurds to give it a unique taste. The Assyrians of Iraq may either call it dolma or yaprekh which is the Syriac term for stuffed grape leaves. Iraqi Arabs usually served dolma without yoghurt. Often chicken or beef ribs are added to the cooking pot, and sometimes served with the dolma instead of masta or khalwah. Iraqi dolma is usually always cooked and served in a tomato-based sauce.In Mosul Dolma is a very popular food. In mosul they also include courggetes, tomatoes, onions, peppers and grape leaves. They are occasionally smoked. 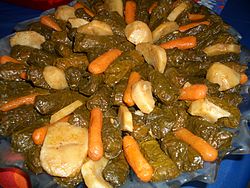 In Israel, vine leaves are commonly stuffed with a combination of meat and rice, although other fillings, such as lentils, have evolved among the various Jewish, Arab and Armenian communities.[5]

In Poland the dish is called "gołąbki" and contains rice and meat with different spices, wrapped in white cabbage leaves. It is cooked in water, served warm, often with tomato sauce.

In Bangladesh and the West Bengal state in India, pointed gourd (Trichosanthes dioica) is used for stuffing fish or meat or vegetables and goes by the name of dolma or the local variant dorma. During the times of the Muslim rulers called Nawabs of Bengal, this dish came to the region with its Turkish name, only the vegetable used to stuff has changed.

In Sweden, Kåldolmar is a Swedish dish inspired by dolma, probably brought to Sweden by king Karl XII who was held captive by the Turks in Bender after losing the Battle of Poltava against the Russians. It is made of cabbage instead of grape leaves and contains minced pork or beef and rice. It is eaten with boiled potatoes, brown sauce and lingonberry jam. 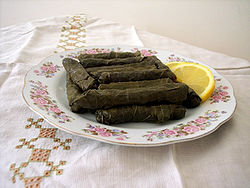 Sarma; a kind of dolma. It is a classic of Turkish cuisine.

In Turkey, there are two main categories of dolma; those filled with a meat mixture: minced meat ("kıyma"), onion, pinenut, rice, oil and some spices; and those filled with a rice mixture (without meat): rice, olive oil, pinenuts, currants (or dried figs/cherries), herbs (fresh parsley, dill and mint) and spices (usually allspice, cinnamon and black pepper). Meat dolma is always eaten hot; meatless ones, "zeytinyağlı dolma" (dolma with olive oil) - "yalancı dolma" (false dolma), usually at room temperature, as a meze. Dolma with meat is a main course and always served with yogurt. An egg-milk based sauce is sometimes used for yaprak sarma with meat in some regions. Common types include peppers (biber dolma), eggplant/aubergine (patlıcan dolma), zucchini/courgette (kabak dolma), plum (erikli dolma), collard greens (karalahana dolma), vine, chard and cabbage leaves (sarma), zucchini flowers (çiçek dolma) or mussels (midye dolma). Tomatoes, pumpkin and some fruits such as quince, apple or melon are also used to make dolma in Turkish cuisine. Mumbar dolması is an interesting type of dolma for which the intestines of sheep are filled with a mixture of rice and meat and bean. In some regions rice is replaced or mixed with bulgur (pounded wheat). The inner part of some vegetables or fruits (which are hollowed out) can be added into the filling.

In the Palestinian Territories, stuffed grape leaves are called "Warak Dawali" in Arabic and are stuffed with parsley rice and ground beef or lamb.