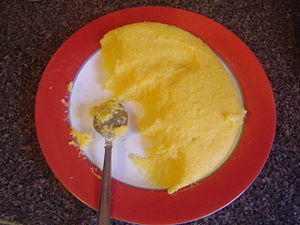 Mămăligă is a porridge made out of yellow maize flour, traditional in Romania and Moldova. It is similar to the Italian polenta.

In Transylvania and in Carpathia mămăligă is also called puliszka. This version of the recipe is roasted in an oven after boiling, with juhtúró, a sheep's cheese, and bacon.

Historically a peasant food, it was often used as a substitute for bread or even as a staple food in the poor rural areas. However, in the last decades it has emerged as an upscale dish available in the finest restaurants.

Historically, porridge is the oldest form of consumption of grains in the whole of humanity, long before the appearance of bread. Originally, the seeds used to prepare slurries were very diverse as millet or einkorn.

Before the introduction of maize in Europe in the 16th century, mămăligă had been made with millet flour, known to the Romans as pulmentum. Moreover, the Romans ate so much of it that the Greeks called them pultiphagonides (porridge eaters).

Corn was introduced in Spain by Hernán Cortés and spread in Europe in the 16th century. Corn requires a good amount of heat and humidity. The Danube Valley is one of Europe's regions ideal for growing wheat.

A Hungarian scholar declare the arrival of corn in Temesvar, in the Banat since 1692[1]. Therefore, the mămăligă of millet will be replaced gradually by the mămăligă of corn. The corn then becomes a first-rate food, including the fight against famine that prevailed even in the 17th and 18th centuries[2].

The historian Nicolae Iorga said that farmers of Principality of Romania grow corn since the early to mid 17th century[3].

Etienne Ignace Raicevich a Ragusan, consul of the Empire in Bucharest in the third quarter of the 18th century, wrote that corn was introduced only da poco tempo.

The existence of the corn's mămăligă is attested since 1873 in the edition of Larousse, a french dictionnary: mamaliga s. f. Boiled corn meal, in the Danubian principalities. 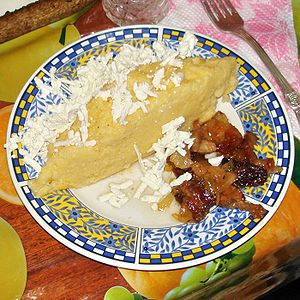 Traditionally, mămăliga is cooked by boiling water, salt and cornmeal in a special-shaped cast iron pot called ceaun or tuci. When cooked peasant-style and used as a bread substitute, mămăliga is supposed to be much thicker than the regular Italian polenta to the point that it can be cut in slices, like bread. When cooked for other purposes, mămăligă can be much softer, sometimes almost to the consistency of porridge. Because mămăligă sticks to metal surfaces, it can be cut with a string into slices, and is eaten by holding it with the hand, just like bread would be.

Mămăligă is often served with sour cream and cheese on the side (mămăliguţă cu brânză şi smântână) or crushed in a bowl of hot milk (mămăliguţă cu lapte). Sometimes slices of mămăligă are pan-fried in oil or in lard, the result being a sort of corn pone.

Since mămăliga can be used as an alternate for bread in many Romanian and Moldovan dishes, there are quite a few which are either based on mămăligă, or include it as an ingredient or side dish. Arguably, the most popular of them is sarmale (a type of cabbage roll with mămăligă.

Another very popular Romanian dish based on mămăligă is called bulz, and consists of mămăligă with cheese and butter and roasted in the oven. 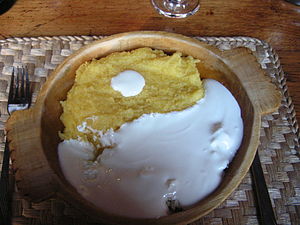 Mămăligă with sour cream and cheese

Balmoş (sometimes spelled balmuş) is another mămăligă-like traditional Romanian dish, but is more elaborate. Unlike mămăligă (where the cornmeal is boiled in water) when making balmoş the cornmeal must be boiled in sheep milk. Other ingredients, such as butter, sour cream, telemea (a type of feta cheese), caş (a type of fresh curdled ewe cheese without whey, which is sometimes called "green cheese" in English), urdă (a type of curdled cheese obtained by boiling and curdling the whey left from caş), etc., are added to the mixture at certain times during the cooking process. It is a specialty dish of the Romanian of old shepherds, and nowadays very few people still know how to make a proper balmoş.

Mămăliga is a versatile food: various recipes of mămăligă-based dishes may include milk, butter, various types of cheese, eggs, sausages (usually fried, grilled or oven-roasted), bacon, mushrooms, ham, fish etc. Mămăliga is a fat-free, cholesterol-free, high-fiber food. It can be used as a healthy alternative to more refined carbohydrates such as white bread, pasta or hulled rice.

In Dracula by Bram Stoker, in chapter 1 it's written :"I had for breakfast more paprika, and a sort of porridge of maize flour which they said was "mamaliga", and egg-plant stuffed with forcemeat, a very excellent dish, which they call "impletata"."

Its analogue in Serbia and Bulgaria is called kachamak (Serbian: качамак/kačamak), (Bulgarian: качамак) and is served mainly with white brine cheese or fried pieces of pork fat with parts of the skin.