Allspice, also called Jamaica pepper, pepper, myrtle pepper, pimenta,[1] or newspice, is a spice that is the dried unripe fruit ("berries") of Pimenta dioica , a mid-canopy tree native to the Greater Antilles, southern Mexico, and Central America, now cultivated in many warm parts of the world.[2] The name "allspice" was coined as early as 1621 by the English, who thought it combined the flavour of cinnamon, nutmeg, and cloves.[3] 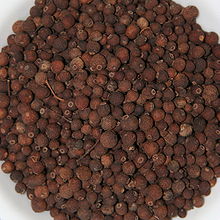 Allspice is the dried fruit of the Pimenta dioica plant. The fruit is picked when it is green and unripe and, traditionally, dried in the sun. When dry, the fruits are brown and resemble large brown peppercorns. The whole fruits have a longer shelf life than the powdered product and produce a more aromatic product when freshly ground before use.

The leaves of the allspice plant are also used in island cooking. More specifically, it is very popular in Jamaican and Tuvaluvian cooking. For cooking, fresh leaves are used where available: they are similar in texture to bay leaves and are thus infused during cooking and then removed before serving. Unlike bay leaves, they lose much flavour when dried and stored, so do not figure in commerce. The leaves and wood are often used for smoking meats where allspice is a local crop. Allspice can also be found in essential oil form.

Allspice is one of the most important ingredients of Caribbean cuisine. It is used in Caribbean jerk seasoning (the wood is used to smoke jerk in Jamaica, although the spice is a good substitute), in moles, and in pickling; it is also an ingredient in commercial sausage preparations and curry powders. Allspice is also indispensable in Middle Eastern cuisine, particularly in the Levant, where it is used to flavor a variety of stews and meat dishes. In Palestinian cuisine, for example, many main dishes call for allspice as the sole spice added for flavoring. In America, it is used mostly in desserts, but it is also responsible for giving Cincinnati-style chili its distinctive aroma and flavor. Allspice is commonly used in Great Britain, and appears in many dishes, including cakes. Even in many countries where allspice is not very popular in the household, such as Germany, it is used in large amounts by commercial sausage makers. Allspice is also a main flavor used in barbecue sauces.[citation needed] In the West Indies, an allspice liqueur called "pimento dram" is produced.

Allspice has also been used as a deodorant. Volatile oils found in the plant contain eugenol, a weak antimicrobial agent,[4] Allspice is also reported to provide relief for indigestion and gas.[5] 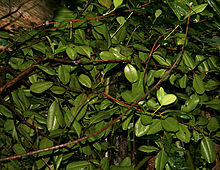 The allspice tree is classified as an evergreen shrub that reaches a height of between 32 and 60 feet. Allspice can be a small scrubby tree, quite similar to the bay laurel in size and form. It can also be a tall, canopy tree, sometimes grown to provide shade for coffee trees that are planted underneath them. It can be grown outdoors in the tropics and subtropics with normal garden soil and watering. Smaller plants can be killed by frost, although larger plants are more tolerant. It adapts well to container culture and can be kept as a houseplant or in a greenhouse. The plant is dioecious, meaning plants are either male or female and hence male and female plants must be kept in proximity to allow fruits to develop[6].

To protect the pimenta trade, the plant was guarded against export from Jamaica. Many attempts at growing the pimenta from seeds were reported, but all failed. At one time, the plant was thought to grow nowhere except in Jamaica, where the plant was readily spread by birds. Experiments were then performed using the constituents of bird droppings; however, these were also totally unsuccessful. Eventually, it was realized that passage through the avian gut, either the acidity or the elevated temperature, was essential for germinating the seeds. Today, pimenta is spread by birds in Tonga and Hawaii, where it has become naturalized on Kauaʻi and Maui.[7]

Allspice (Pimenta dioica) was encountered by Christopher Columbus on the island of Jamaica during his second voyage to the New World, and named by Dr. Diego Álvarez Chanca. It was introduced into European and Mediterranean cuisines in the 16th century. It continued to be grown primarily in Jamaica, though a few other Central American countries produced allspice in comparatively small quantities.[6]