Horseradish
This article is about the plant. For the book by Lemony Snicket, see Horseradish: Bitter Truths You Can't Avoid. 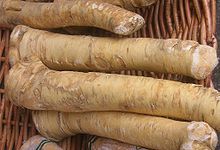 Roots of the horseradish plant 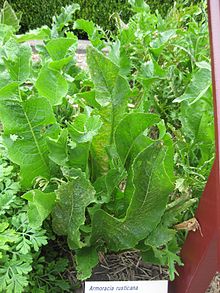 Foliage of the horseradish plant 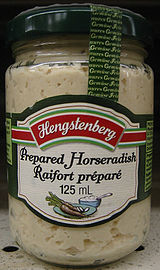 Horseradish (Armoracia rusticana, syn. Cochlearia armoracia) is a perennial plant of the Brassicaceae family, which also includes mustard, wasabi, broccoli, and cabbages. The plant is probably native to south eastern Europe and the Arab World (western Asia), but is popular around the world today. It grows up to 1.5 metres (five feet) tall and is mainly cultivated for its large white, tapered root.

The intact horseradish root has hardly any aroma. When cut or grated, however, enzymes from the damaged plant cells break down sinigrin (a glucosinolate) to produce allyl isothiocyanate (mustard oil), which irritates the sinuses and eyes. Once grated, if not used immediately or mixed in vinegar, the root darkens, loses its pungency, and becomes unpleasantly bitter when exposed to air and heat.

Horseradish has been cultivated since antiquity. According to Greek mythology, the Delphic Oracle told Apollo that the horseradish was worth its weight in gold.[1] Horseradish was known in Egypt in 1500 BC. Dioscorides listed horseradish under Thlaspi or Persicon; Cato discusses the plant in his treatises on agriculture, and a mural in Pompeii shows the plant. Horseradish is probably the plant mentioned by Pliny the Elder in his Natural History under the name of Amoracia, and recommended by him for its medicinal qualities, and possibly the Wild Radish, or raphanos agrios of the Greeks. The early Renaissance herbalists Pietro Andrea Mattioli and John Gerard showed it under Raphanus.[2]

Both root and leaves were used as a medicine during the Middle Ages and the root was used as a condiment on meats in Germany, Scandinavia, and Britain.[3] It was taken to North America during Colonial times.[3]

William Turner mentions horseradish as Red Cole in his "Herbal" (1551–1568), but not as a condiment. In "The Herball, or Generall Historie of Plantes" (1597), John Gerard describes it under the name of raphanus rusticanus, stating that it occurs wild in several parts of England. After referring to its medicinal uses, he says: "the Horse Radish stamped with a little vinegar put thereto, is commonly used among the Germans for sauce to eat fish with and such like meates as we do mustarde."[4]

Where the English name horseradish comes from is not certain. Maybe it has its roots in Anglosaxonian times, because the old German word "Mähre" (ahd. meriha ) means female horse. It may derive by misinterpretation of the German name Meerrettich ("sea radish") as Mährrettich ("mare radish"). Despite the name this plant is poisonous to horses.

Horseradish is perennial in hardiness zones 2–9 and can be grown as an annual in other zones, though not as successfully as in zones with both a long growing season and winter temperatures cold enough to ensure plant dormancy. After the first frost in the autumn kills the leaves, the root is dug and divided. The main root is harvested and one or more large offshoots of the main root are replanted to produce next year's crop. Horseradish left undisturbed in the garden spreads via underground shoots and can become invasive. Older roots left in the ground become woody, after which they are no longer culinarily useful, although older plants can be dug and re-divided to start new plants.[5][3]

Widely introduced by accident, "cabbageworms", the larvae of Pieris rapae, the Small White Butterfly, are a common caterpillar pest in horseradish. The adults are white butterflies with black spots on the forewings that are commonly seen flying around plants during the day. The caterpillars are velvety green with faint yellow stripes running lengthwise down the back and sides. Full grown caterpillars are about 1-inch (25 mm) in length. They move sluggishly when prodded. They overwinter in green pupal cases. Adults start appearing in gardens after the last frost and are a problem through the remainder of the growing season. There are 3 to 5 overlapping generations a year. Mature caterpillars chew large, ragged holes in the leaves leaving the large veins intact. Handpicking is an effective control strategy.[6]

Cooks use the terms "horseradish" or "prepared horseradish" to refer to the grated root of the horseradish plant mixed with vinegar. Prepared horseradish is white to creamy-beige in colour. It will keep for months refrigerated but eventually will start to darken, indicating it is losing flavour and should be replaced. The leaves of the plant, while edible, are not commonly eaten, and are referred to as "horseradish greens".

A bottle of Heinz horseradish sauce.

Horseradish sauce made from grated horseradish root, vinegar and cream is a popular condiment in the United Kingdom. It is usually served with roast beef, often as part of a traditional Sunday roast, but can be used in a number of other dishes also, including sandwiches or salads. Also popular in the UK is Tewkesbury mustard, a blend of mustard and grated horseradish originally created in medieval times and mentioned by Shakespeare (Falstaff says: “his wit’s as thick as Tewkesbury Mustard” in Henry IV Part II[7]).

In the U.S., the term Horseradish Sauce refers to grated horseradish combined with mayonnaise or Miracle Whip salad dressing (such as Arby's "Horsey Sauce"). Kraft Foods and other large condiment manufacturers sell this type of Horseradish Sauce.

Prepared horseradish is a common ingredient in Bloody Mary cocktails and in cocktail sauce, and is used as a sauce or spread on meat, chicken, and fish, and in sandwiches. The American fast food restaurant chain Arby's uses horseradish in its "Horsey Sauce", which it offers as a regular condiment, alongside ketchup, mustard, and mayonnaise; this is not a common practice among its major competitors.

In Central and Eastern Europe horseradish is called khreyn (in various spellings like kren) in many Slavic languages, in Austria and parts of Germany and North-East Italy, and in Yiddish (כריין translitered as khreyn). There are two varieties of khreyn. "Red" khreyn is mixed with red beet (beetroot) and "white" khreyn contains no beet. It is popular in Ukraine (under the name of хрін, khrin), in Poland (under the name of chrzan), in the Czech Republic (křen), in Russia (хрен, khren), in Hungary (torma), in Romania (hrean), in Bulgaria (хрян, khryan), and in Slovakia (under the name of chren). Having this on the table is a part of Christian Easter and Jewish Passover tradition in Eastern and Central Europe. A variety with red beet is called ćwikła z chrzanem or simply ćwikła in Poland. In Ashkenazi European Jewish cooking beet horseradish is commonly served with Gefilte fish. Red beet with horseradish is also used as a salad served with lamb dishes at Easter called 'sfecla cu hrean' in Transylvania and other Romanian regions. Horseradish (often grated and mixed with cream, hard-boiled eggs, or apples) is also a traditional Easter dish in Slovenia and in the adjacent Italian region of Friuli Venezia Giulia; it is used also in the other nearby Italian region of Veneto. In Croatia freshly grated horseradish is often eaten with boiled ham or beef. In Serbia ren is an essential condiment with cooked meat and freshly roasted suckling pig.

Horseradish is also used as a main ingredient for soups. In the Polish region of Silesia, horseradish soup is a common Easter Day dish.[8]

Even in Japan, horseradish dyed green is often substituted for the more expensive wasabi traditionally served with sushi.[9] The Japanese botanical name for horseradish is seiyōwasabi (セイヨウワサビ, 西洋山葵?), or "Western wasabi".

Horseradish contains two glucosinolates, sinigrin and gluconasturtiin, which are responsible for its pungent taste.[10]

Horseradish contains potassium, calcium, magnesium and phosphorus, as well as volatile oils, such as mustard oil (which has antibacterial properties due to the antibacterial mechanism of allyl isothiocyanate).[11] Fresh, the plant contains average 79.31 mg of vitamin C per 100 g of raw horseradish.[12]

The enzyme horseradish peroxidase, found in the plant, is used extensively in molecular biology for antibody detection, among other things. It is becoming increasingly important in biochemical research fields.[13]

Horseradish peroxidase (HRP) is widely used in research for immunohistochemistry labelling of tissue sections, e.g. in biopsies of subjects suspected to have cancer. Usually many molecules of the enzyme are covalently bound to an antibody of preferred specification for some other antibody that recognizes a specific biomarker expressed in cells that the tissue sections contain. The HRP will convert 3,3-diaminobenzidine (DAB), that is next added to the sections, to a yellowish brown insoluble compound. This compound is then visible in a photon or electron microscope. For more information see Histochemistry.

Known to have diuretic properties, the roots have been used to treat various minor health problems, including urinary tract infections, bronchitis, sinus congestion, ingrowing toenails and coughs. Compounds found in horseradish have been found to kill some bacterial strains.[3]

As a form of folk medicine against cold, a teaspoonful of grated horseradish mixed with honey will clear one's nose in a few minutes.