The plant is similar in appearance to a carrot plant, with finely divided, feathery leaves with thread-like divisions, growing on 20–30 cm stems. The main flower stem is 40–60 cm tall, with small white or pink flowers in umbels. Caraway fruits (erroneously called seeds) are crescent-shaped achenes, around 2 mm long, with five pale ridges.

The plant prefers warm, sunny locations and well-drained soil rich in organic matter. In warmer regions it is planted in the winter months as an annual. In temperate climates it is planted as a summer annual or biennial. 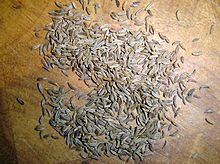 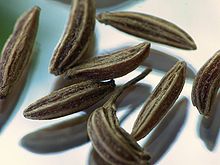 A magnified view of caraway fruits used as a spice.

The fruits, usually used whole, have a pungent, anise-like flavor and aroma that comes from essential oils, mostly carvone and limonene.[citation needed] They are used as a spice in breads, especially rye bread.

Caraway is also used in desserts, liquors, casseroles, curry and other foods. It is more commonly found in European cuisine. For example, it is commonly used in British Caraway seed cake and is also added to sauerkraut. [2][3][4][5][6]. It is also used to add flavor to cheeses such as bondost, pultost, nøkkelost and havarti. Akvavit and several liqueurs are made with caraway. In Middle Eastern cuisine, caraway pudding is a popular dessert during Ramadan. [7]

The roots may be cooked as a root vegetable like parsnips or carrots.

Caraway seed oil is also used as a fragrance component in soaps, lotions, and perfumes.

The etymology of caraway is complex and poorly understood.

Caraway has been called by many names in different regions, with names deriving from the Latin cuminum (cumin), the Greek karon (again, cumin), which was adapted into Latin as carum (now meaning caraway), and the Sanskrit karavi, sometimes translated as "caraway" but other times understood to mean "fennel."[7] The Italian finocchio meridionale (meridian fennel) suggests these shared roots, while cumino tedesco (German cumin) again points towards cumin—though caraway also has its own name in Italian, caro . Other languages share similar peculiarities, with the Norwegian name "karve", Yiddish borrowing the German Kümmel (caraway) as kimmel to mean caraway, yet using the semitic term kamoon for cumin, which is Kreuzkümmel in German.[7]

English usage of the term caraway dates back to at least 1440,[8] and is considered by Skeat to be of Arabic origin, though Katzer believes the Arabic al-karawya (cf. Spanish alcaravea) to be derived from the Latin carum.[7]

Caraway thyme has a strong caraway scent and is sometimes used as a substitute for real caraway in recipes.