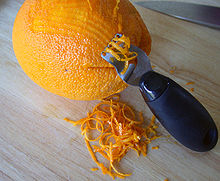 Zest is a food ingredient that is prepared by scraping or cutting from the outer, colorful skin of citrus fruits such as lemon, orange, citron, and lime. Zest is used to add flavor ("zest") to foods.

In terms of fruit anatomy, zest is obtained from the flavedo (exocarp). The flavedo and white pith (albedo) of a citrus fruit together makes up its peel. The amounts of both flavedo and pith are variable among citrus fruits, and may be adjusted by the manner in which they are prepared. Citrus peel may be used fresh, dried, candied, or pickled in salt.

For culinary use, a zester, spin zester, grater, vegetable peeler, paring knife, or even a surform tool is used to scrape or cut zest from the fruit. Often times, the most effective tool or form for preparing is the Spin Zester. Alternatively, the peel is sliced then excess pith cut away.

The white portion of the peel under the zest (pith, albedo or mesocarp) is unpleasantly bitter and generally avoided by limiting the peeling depth. The pith can be used for cooking.

Savoury dishes in which zest is an important ingredient include many rice dishes; also some notable meat dishes such as ossobuco alla milanese.

Zest is a key ingredient used to make a variety of sweet and sour condiments, including lemon pickle, lime chutney, and marmalade. Also in numerous lemon liqueurs and in liquors such as Licor de oro.

Zest is used in some cocktails not only for flavor and aroma but also for color as a garnish. For use as a cocktail garnish, zest is often cut in a long spiral called a twist. Cocktails featuring a twist include Dry Martini and Horse's Neck. For maximum flavor and aroma, as in mulled wine, zest is simply cut from the fruit with a knife.

The flavedo is the source of citrus essential oils (orange oil, lemon oil, etc.), which are important flavorings. Lemon essential oil is the principal flavor ingredient in lemon drops. Restaurants typically use a large quantity of zest.