Fruit anatomy is the internal structure of fruit, the mature ovary or ovaries from one or more flowers. In fleshy fruits, the outer and often edible layer is the pericarp, which is the tissue that develops from the ovary wall of the flower and surrounds the seeds. Some edible "vegetables" such as the cucumber, squash, and tomatoes are actually botanical fruits. In some seemingly pericarp fruits the edible portion is not derived from the ovary, for example in Ackee the edible portion is an aril, and in pineapple several tissues from the flower and the stem are involved. 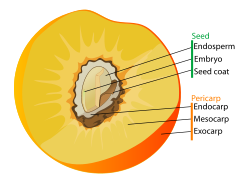 Diagram of a typical drupe (peach), showing both fruit and seed

In berries and drupes, the pericarp forms the edible tissue around the seeds. In accessory fruits, other tissues develop into the edible portion of the fruit instead, for example the receptacle of the flower in apples and strawberries.

The endopericarpal layer is the layer between the endocarp and the hemispherical diploid organism.

Exocarp (Gr. "outside" + "fruit"), is a botanical term for the outermost layer of the pericarp (or fruit). The exocarp forms the tough outer skin of the fruit, which bears oil glands and pigments. The exocarp is sometimes called the epicarp, or, especially in citruses, the flavedo.

A schematic picture of an orange hesperidium

In citrus fruits, the flavedo constitutes the peripheral surface of the pericarp. It is composed of several cell layers that become progressively thicker in the internal part; the epidermic layer is covered with wax and contains few stomata, which in many cases are closed when the fruit is ripe.

When ripe, the flavedo cells contain carotenoids (mostly xanthophyll) inside chromoplasts, which, in a previous developmental stage, contained chlorophyll. This hormonally controlled progression in development is responsible for the fruit's change of color from green to yellow upon ripening.

The internal region of the flavedo is rich in multicellular bodies with spherical or pyriform shapes, which are full of essential oils.

Mesocarp (Gr. "middle" + "fruit") or Sarcocarp ("flesh" + "fruit"), is the botanical term for the succulent and fleshy middle layer of the pericarp of drupaceous fruit, between the exocarp and the endocarp; it is usually the part of the fruit that is eaten.

This term may also refer to any fruit that is fleshy throughout. In a hesperidium such as a citrus fruit, the mesocarp is also referred to as albedo or pith because of its soft fiber. It is part of the peel which is commonly removed by hand.

Olive drupe endocarp (left and center) and the seed (right)

Endocarp (Gr. "inside" + "fruit"), is a botanical term for the inside layer of the pericarp (or fruit), which directly surrounds the seeds. It may be membranous as in citrus where it is the only part consumed, or thick and hard as in the stone fruits of the family Rosaceae such as peaches, cherries, plums, and apricots.

In nuts, it is the stony layer that surrounds the kernel of pecans, walnuts, etc., and that is removed prior to consumption.

In citrus, the endocarp is separated into sections, which are most commonly called segments. The juicy pulp filling the segments is usually referred to as juice vesicles.

The grains of grasses are single-seed simple fruits wherein the pericarp (ovary wall) and seed coat are fused into one layer. This type of fruit is called a caryopsis. Examples include cereal grains, such as wheat, barley, and rice.