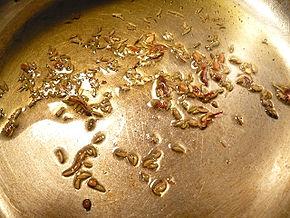 Chaunk (Hindi: छौंक); sometimes spelled chhaunk, chounk, chonk, chhounk, or chhonk; also called tarka, tadka, bagar, phoron in Bengali, vaghaar (વઘાર) in Gujarati, Thalimpu (తాళింపు) or popu ( పోపు in Telugu) ; and often translated as tempering is a garnish and/or cooking technique used in the cuisines of India, Bangladesh, and Pakistan, in which whole spices (and sometimes also other ingredients such as minced ginger root or sugar) are fried briefly in oil or ghee to liberate essential oils from cells and thus enhance their flavors, before being poured, together with the oil, into a dish.

Chhaunk is added at the end of cooking, just before serving (as with a dal, sambar or stew), or else prepared at the beginning of cooking, before adding the ingredients to a curry or similar dish.

Chaunk is believed to not only add flavor but also to aid in digestion, unless the person consuming the dish has trouble with digesting fatty foods.

The Hindi name, chhaunk (the initial consonant, "chh" [छ], is a heavily aspirated "ch" sound), is believed to be onomatopoetic, imitating the muffled sound of the just-fried spices being added to a dal or other dish.

The Bengali name, bagar dewa (বাগার দেয়া), translates as "to temper" (bagar = the act of tempering; dewa = to give; hence "to give temperance to"). 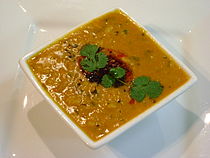 Various words of Chhaunk or Tadka are commonly used in media, for example, Comedy Circus 3 Ka Tadka, a standup comedy show on Sony TV and Chill Tadka on Nickelodeon-India.