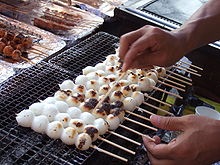 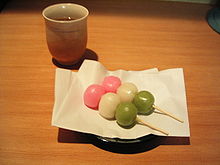 Dango (団子?) is a Japanese dumpling made from mochiko (rice flour), related to mochi. It is often served with green tea.

Dango are eaten year-round, but the different varieties are traditionally eaten in given seasons. Three to four dango are often served on a skewer.

There are many different varieties of dango which are usually named after the various seasonings served on or with it. [1]

Dango is used internationally amongst go players as a derogatory term for an inefficient, dumpling-like cluster of stones in a go game. It is also the name of a go variant invented in 1991.

A hairstyle consisting of dango-like buns on either side of the head is sometimes known as odango.