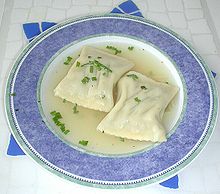 Maultaschen in a clear vegetable soup

Maultasche (help·info)) are a Swabian (Baden-Württemberg, Germany) specialty food, consisting of an outer layer of pasta dough with a filling traditionally made of minced meat, smoked meat, spinach, bread crumbs and onions and flavored with various herbs and spices (e.g. parsley and nutmeg). Similar in appearance to Italian ravioli, Maultaschen are usually larger, however, each Maultasche being about 8-12 cm (3-5 inches) across.

Maultaschen are traditionally eaten either geröstet (cut into slices and fried in a pan with onions and scrambled eggs) or in der Brühe (simmered in vegetable broth), or geschmälzt (dressed with butter and onions), usually with potato salad.

On Maundy Thursday and Good Friday, Maultaschen are a traditional dish in Swabia, because the meat is concealed under the pasta dough and cannot be seen by God. Therefore they have earned the nickname "Little Cheaters on God" (Swabian "Herrgottsbescheißerle").

Various stories are told about the origin of Maultaschen although there is hardly evidence for one or the other.

On October 23, 2009, the Gazette of the European Communities[2] announced that "Schwäbische Maultaschen" or "Schwäbische Suppenmaultaschen (g.g.A.)" are recognized as a "regional specialty", thus marking its significance to the cultural heritage of Baden-Württemberg. Just as importantly, this means that genuine Maultaschen have to be produced in Swabia, Baden-Württemberg, (German Federal State) or the Swabian speaking areas of Bavaria.[3]