The Chinese name for Tian Shan may be derived from the Xiongnu name qilian (祁连), which was descried by the Shiji as the homeland of the Yuezhi, and has been said[1] to refer to the Tian Shan rather than to the range 1,500 kilometres (930 mi) further east now known by this name. The nearby Tannu-Ola Mountains (Tuvan: Таңды-Уула Tangdy-Uula) bear the same name ("heaven/celestial mountains" or "god/spirit mountains").

Tian Shan lies to the north and west of the Taklamakan Desert in the border region of Kazakhstan, Kyrgyzstan and the Xinjiang Uyghur Autonomous Region of western China. In the south it links up with the Pamir Mountains. It also extends into the Chinese province of Xinjiang and into the northern areas of Pakistan, where it joins the Hindu Kush.[citation needed] 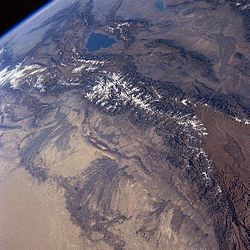 Tian Shan Mountains from space, October 1997, with Issyk-Kul Lake in Kyrgyzstan at the northern end

The Tian Shan are a part of the Himalayan orogenic belt, which was formed by the collision of the Indian and Eurasian plates in the Cenozoic era. They are one of the longest mountain ranges in Central Asia and stretch some 2,800 kilometres (1,700 mi) eastward from Tashkent in Uzbekistan.

The highest peak in the Tian Shan is Victory Peak (пик Победы in Russian or Jengish Chokusu in Kyrgyz) which, at 7,439 metres (24,406 ft), is also the highest point in Kyrgyzstan and is on the border with China. The Tian Shan's second highest peak, Khan Tengri (Lord of the Spirits), straddles the Kazakhstan-Kyrgyzstan border and at 7,010 metres (23,000 ft) is the highest point of Kazakhstan. Mountaineers class these as the two most northerly peaks over 7,000 metres (23,000 ft) in the world.

The Torugart Pass, at 3,752 metres (12,310 ft), is located at the border between Kyrgyzstan and China's Xinjiang province. The forested Alatau ranges, which are at a lower altitude in the northern part of the Tian Shan, are inhabited by pastoral tribes that speak Turkic languages.

The major rivers rising in the Tian Shan are the Syr Darya, the Ili River and the Tarim River. The Aksu Canyon is a notable feature in the northwestern Tian Shan.

One of the first Europeans to visit and the first to describe the Tian Shan in detail was the Russian explorer Peter Semenov, who did so in the 1850s.

Ranges of the Tian Shan

The Tian Shan have a number of named ranges which are often mentioned separately. (all distances are approximate) 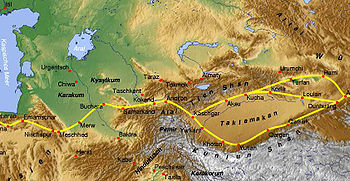 In China the Tian Shan starts north of Kumul City (Hami) with the U-shaped Barkol Mountains, from about 600 to 400 kilometres (370 to 250 mi) east of Ürümqi. Then the Bogda Shan (god mountains) run from 350 to 40 kilometres (220 to 25 mi) east of Ürümqi. Then there is a low area between Ürümqi and the Turfan Depression. The Borohoro mountains start just south of Ürümqi and run west northwest 450 kilometres (280 mi) separating Dzungaria from the Ili River basin. Their north end abuts on the 200 kilometres (120 mi) Dzungarian Alatau which run east northeast along Sino-Kazakh border. They start 50 kilometres (31 mi) east of Taldykorgan in Kazakhstan and end at the Dzungarian Gate. The Dzungarian Alatau in north, (name?) in middle and Borohoro range in south make a reversed Z or S, the northeast enclosing part of Dzungaria and the southwest enclosing the upper Ili valley. 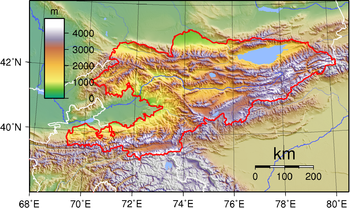 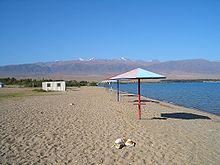 In Kyrgyzstan the main line of the Tian Shan continues as (name?) from the base of the Borohoros west 570 kilometres (350 mi) to the point where China, Kazakhstan and Kyrgyzstan meet. Here is the highest part of the range – the Central Tian Shan, with Peak Pobeda and Khan Tengri. West of this, the Tian Shan split into an ‘eye’, with Issyk Kul Lake in its center. The south side of the lake is the Terskey Alatau and the north side the Kyungey Ala-Too (shady and sunny Ala-Too). North of the Kyungey Ala-Too and parallel to it is the Trans-Ili Alatau in Kazakhstan just south of Almaty. West of the eye, the range continues 400 kilometres (250 mi) as the Kyrgyz Ala-Too, separating Chui Province from Naryn Oblast and then Kazakhstan from the Talas Province. This oblast is the upper valley of the Talas River, the south side of which is the 200 kilometres (120 mi) Talas Ala-Too Range ('Ala-too' is a Kirgiz spelling of Alatau). At the east end of the Talas Alatau the Suusamyr Too range runs southeast enclosing the Suusamyr Valley or plateau.

As for the area south of the Fergana Valley there is a 800 kilometres (500 mi) group of mountains that curves west-southwest from south of Issyk Kul Lake separating the Tarim Basin from the Fergana Valley. The Fergana Range runs northeast towards the Talas Ala-Too and separaties the upper Naryn basin from Fergana proper. The southern side of these mountains merge into the Pamirs in Tajikistan (Alay Mountains and Trans-Alay Range). West of this is the Turkestan Range, which continues almost to Samarkand.

The Tian Shan holds important forests of Schrenk's Spruce (Picea schrenkiana) at altitudes of over 2,000 metres (6,600 ft); the lower slopes have unique natural forests of wild Walnuts and Apples.[citation needed]

In Daoism Xi Wangmu, the Queen Mother of the West is believed to guard the peach trees of immortality in the Tian Shan.