Kazakhstan is located in Central Asia and Eastern Europe. With an area of about 2,717,300 square kilometers, Kazakhstan is more than twice the combined size of the other four Central Asian states, or about twice the size of Alaska. The country borders Turkmenistan, Uzbekistan, and Kyrgyzstan to the south; Russia to the north; Russia and the Caspian Sea to the west; and China's Xinjiang Uygur Autonomous Region to the east. 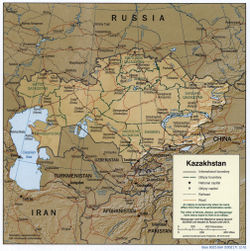 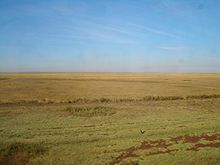 In the steppes of Central Asia (Aqmola Province)

There is considerable topographical variation within Kazakhstan. The highest point is the top of the mountain Khan Tengri, on the Kyrgyz border in the Tian Shan range, with an elevation of + 7,010 meters; the lowest point is the bottom of the Karagiye depression at -132 m, in the Mangystau province east of the Caspian Sea. Most of the country lies at between 200 and 300 meters above sea level, but Kazakhstan's Caspian shore includes some of the lowest elevations on Earth.

Many of the peaks of the Altay and Tian Shan ranges are snow covered year-round, and their run-off is the source for most of Kazakhstan's rivers and streams.

Except for the Tobol, Ishim, and Irtysh rivers (the Kazak names for which are, respectively, Tobyl, Esil, and Ertis), portions of which flow through Kazakhstan, all of Kazakhstan's rivers and streams are part of landlocked systems. They either flow into isolated bodies of water such as the Caspian Sea or simply disappear into the steppes and deserts of central and southern Kazakhstan. Many rivers, streams, and lakes are seasonal, evaporating in summer. The three largest bodies of water are Lake Balkhash, a partially fresh, partially saline lake in the east, near Almaty, and the Caspian and Aral Seas, both of which lie partially within Kazakhstan.

Some 9.4 % of Kazakhstan's land is mixed prairie and forest or treeless prairie, primarily in the north or in the basin of the Ural River in the west. More than three-quarters of the country, including the entire west and most of the south, is either semidesert (33.2 %) or desert (44 %). The terrain in these regions is bare, eroded, broken uplands, with sand dunes in the Qizilqum ('The Red Sands'; in the Russian form, Kyzylkum) and Moyunqum (in the Russian form, Muyunkum (Муюнкум)) deserts, which occupy south-central Kazakhstan. 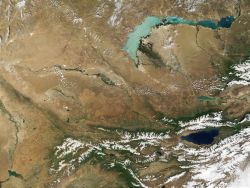 Portions of Kazakhstan (top) and Kyrgyzstan at the bottom. The lake at the top of the image is Lake Balkhash.

The environment of Kazakhstan has been badly damaged by human activity. Most of the water in Kazakhstan is polluted by industrial effluents, pesticide and fertilizer residue, and, in some places, radioactivity. The most visible damage has been to the Aral Sea, which as recently as the 1970s was larger than any of the Great Lakes of North America save Lake Superior. The sea began to shrink rapidly when sharply increased irrigation and other demands on the only significant tributaries, the Syr Darya and the Amu Darya (the latter reaching the Aral from neighboring Uzbekistan), all but eliminated inflow. By 1993 the Aral Sea had lost an estimated 60 % of its volume, in the process breaking into three unconnected segments. Increasing salinity and reduced habitat have killed the Aral Sea's fish, hence destroying its once-active fishing industry, and the receding shoreline has left the former port of Aral'sk more than seventy kilometers from the water's edge. The depletion of this large body of water has increased temperature variations in the region, which in turn have had an impact on agriculture. A much greater agricultural impact, however, has come from the salt- and pesticide-laden soil that the wind is known to carry as far away as the Himalaya Mountains and the Pacific Ocean. Deposition of this heavily saline soil on nearby fields effectively sterilizes them. Evidence suggests that salts, pesticides, and residues of chemical fertilizers are also adversely affecting human life around the former Aral Sea; infant mortality in the region approaches 10 % compared with the 1991 national rate of 2.7 %.

By contrast, the water level of the Caspian Sea has been rising steadily since 1978 for reasons that scientists have not been able to explain fully. At the northern end of the sea, more than 10,000 square kilometres of land in Atyrau Province have been flooded. Experts estimate that if current rates of increase persist, the coastal city of Atyrau, eighty-eight other population centers, and many of Kazakhstan's Caspian oil fields could be submerged by 2020.

Wind erosion has also had an impact in the northern and central parts of the republic because of the introduction of wide-scale dryland wheat farming. In the 1950s and 1960s, much soil was lost when vast tracts of Kazakhstan's prairies were plowed under as part of Khrushchev's Virgin Lands agricultural project. By the mid-1990s, an estimated 60 % of the republic's pastureland was in various stages of desertification.

Industrial pollution is a bigger concern in Kazakhstan's manufacturing cities, where aging factories pump huge quantities of unfiltered pollutants into the air and groundwater. The former capital, Almaty, is particularly threatened, in part because of the postindependence boom in private automobile ownership.

The gravest environmental threat to Kazakhstan comes from radiation, especially in the Semey (Semipalatinsk) region of the northeast, where the Soviet Union tested almost 500 nuclear weapons, 116 of them above ground. Often, such tests were conducted without evacuating or even alerting the local population. Although nuclear testing was halted in 1990, radiation poisoning, birth defects, severe anemia, and leukemia are very common in the area.

With some conspicuous exceptions, lip service has been the primary official response to Kazakhstan's ecological problems. In February 1989, opposition to Soviet nuclear testing and its ill effects in Kazakhstan led to the creation of one of the republic's largest and most influential grass-roots movements, Nevada-Semipalatinsk, which was founded by Kazak poet and public figure Olzhas Suleymenov. In the first week of the movement's existence, Nevada-Semipalatinsk gathered more than 2 million signatures from Kazakhstanis of all ethnic groups on a petition to Mikhail Gorbachev demanding the end of nuclear testing in Kazakhstan. After a year of demonstrations and protests, the test ban took effect in 1990. It remained in force in 1996, although in 1995 at least one unexploded device reportedly was still in position near Semey.

Once its major ecological objective was achieved, Nevada-Semipalatinsk made various attempts to broaden into a more general political movement; it has not pursued a broad ecological or "green" agenda. A very small green party, Tabigat, made common cause with the political opposition in the parliament of 1994.

The government has established a Ministry of Ecology and Bioresources, with a separate administration for radioecology, but the ministry's programs are underfunded and given low priority. In 1994 only 23 % of budgeted funds were actually allotted to environmental programs. Many official meetings and conferences are held (more than 300 have been devoted to the problem of the Aral Sea alone), but few practical programs have gone into operation. In 1994 the World Bank, the International Monetary Fund (IMF), and the United States Environmental Protection Agency agreed to give Kazakhstan US$62 million to help the country overcome ecological problems.

Natural hazards
Earthquakes in the south, mud slides around Almaty
Environment—current issues
Radioactive or toxic chemical sites associated with its former defense industries and test ranges are found throughout the country and pose health risks for humans and animals; industrial pollution is severe in some cities; because the two main rivers which flowed into the Aral Sea have been diverted for irrigation, it is drying up and leaving behind a harmful layer of chemical pesticides and natural salts; these substances are then picked up by the wind and blown into noxious dust storms; pollution in the Caspian Sea; soil pollution from overuse of agricultural chemicals and salination from poor infrastructure and wasteful irrigation practices
Environment—international agreements