The geography of Cyprus included both the physical and human geography of Cyprus, an island country situated in the Eastern Basin of the Mediterranean Sea. Cyprus is third largest island in the Mediterranean (after the Italian islands of Sicily and Sardinia) and the world's 81st largest. It is located south of Asia Minor, the Anatolian peninsula of the Asian (or Eurasian) mainland (now part of modern-day Turkey), so it may be included in Western Asia[1] or the Middle East:[2] At a confluence of Western Asia, Southern Europe, and Northern Africa, Cyprus has had lengthy periods of mainly Greek and intermittent Anatolian, Levantine, Byzantine, and Western European influences. It is sometimes included in Europe,[3] and has been a member state of the European Union since 1 May 2004.

The island is dominated by two mountain ranges, the Troodos Mountains and the Kyrenia Mountains, and the central plain, the Mesaoria, which is between them. The Troodos Mountains cover most of the southern and western portions of the island and account for roughly half its area. The narrow Kyrenia Range, extends along the northern coastline. It is not as high as the Troodos Mountains, and it occupies substantially less area. The two mountain ranges run generally parallel to the Taurus Mountains on the Turkish mainland, the outlines of which are visible from northern Cyprus. Coastal lowlands, varying in width, surround the island.

Geopolitically, the island is divided into four main segments. The Republic of Cyprus, the internationally recognized government, occupies the southern two-thirds of the island. Turkey occupies the northern third of the island which it calls the Turkish Republic of Northern Cyprus; a de facto independent state recognised only by Turkey. The United Nations-controlled Green Line is a buffer zone that separates the two. Lastly, two bases under British sovereignty, Akrotiri and Dhekelia, are located on the island.

This image, acquired by NASA's Terra satellite on 30 January 2001, shows the three distinct geologic regions of the island. In the central and western part of the island is the Troodos Massif, a mountain range whose surface layer is mostly basaltic lava rock, and whose maximum elevation is 1,952 metres (6,404 ft). Running in a thin arc along the northeast margin of the island is Cyprus's second mountain range, a limestone formation called the Kyrenia Range. The space between these ranges is home to the capital Nicosia, visible as a grayish-brown patch near the image's center. 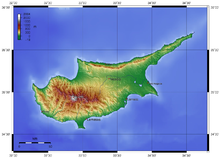 The rugged Troodos Mountains, whose principal range stretches from Pomos Point in the northwest almost to Larnaca Bay on the east, are the single most conspicuous feature of the landscape. Intensive uplifting and folding in the formative period left the area highly fragmented, so that subordinate ranges and spurs veer off at many angles, their slopes incised by steep-sided valleys. In the southwest, the mountains descend in a series of stepped foothills to the coastal plain.

While the Troodos Mountains are a massif formed of molten igneous rock, the Kyrenia Range is a narrow limestone ridge that rises suddenly from the plains. Its easternmost extension becomes a series of foothills on the Karpass Peninsula. That peninsula points toward Asia Minor, to which Cyprus belongs geologically.

Even the highest peaks of the Kyrenia Range are hardly more than half the height of the great dome of the Troodos massif, Mount Olympus (1,952 m/6,404 ft),[4] but their seemingly inaccessible, jagged slopes make them considerably more spectacular. British writer Lawrence Durrell, in Bitter Lemons, wrote of the Troodos as "an unlovely jumble of crags and heavyweight rocks" and of the Kyrenia Range as belonging to "the world of Gothic Europe, its lofty crags studded with crusader castles."

Rich copper deposits were discovered in antiquity on the slopes of the Troodos. The massive sulfide deposits formed as a part of an ophiolite complex at a spreading center under the Mediterranean Sea which was tectonically uplifted during the Pleistocene and emplaced in its current location.[5]

In much of the island, access to a year-round supply of water is difficult. This is traditionally attributed to deforestation which damaged the island's drainage system through erosion, but Grove and Rackham question this view.[6] A network of winter rivers rises in the Troodos Mountains and flows out from them in all directions. The Yialias River and the Pedhieos River flow eastward across the Mesaoria into Famagusta Bay; the Serraghis River flows northwest through the Morphou plain. All of the island's rivers, however, are dry in the summer. An extensive system of dams and waterways has been constructed to bring water to farming areas.

The Mesaoria is the agricultural heartland of the island, but its productiveness for wheat and barley depends very much on winter rainfall; other crops are grown under irrigation. Little evidence remains that this broad, central plain, open to the sea at either end, was once covered with rich forests whose timber was coveted by ancient conquerors for their sailing vessels. The now-divided capital of the island, Nicosia, lies in the middle of this central plain.

Cyprus countryside on the way to Troodos Mountains during the summer

Despite its small size, Cyprus has a variety of natural vegetation. This includes forests of conifers and broadleaved trees such as Pinus brutia, cedar, cypresses and oaks. Ancient authors write that most of Cyprus, even Messaoria, was heavily forested, and there are still considerable forests on the Troodos and Kyrenia ranges, and locally at lower altitudes. About 17% of the whole island is classified as woodland. Where there is no forest, tall shrub communities of golden oak (Quercus alnifolia), strawberry tree (Arbutus andrachne), terebinth (Pistacia terebinthus), olive (Olea europaea), kermes oak (Quercus coccifera) and styrax (Styrax officinalis) are found, but such maquis is uncommon. Over most of the island untilled ground bears a grazed covering of garrigue, largely composed of low bushes of Cistus, Genista sphacelata, Calycotoime villosa, Lithospermum hispidulum, Phaganalon rupestre and, locally, Pistacia lentiscus. Where grazing is excessive this covering is soon reduced, and an impoverished batha remains, consisting principally of Thymus capitatus, Sarcopoterium spinosum, and a few stunted herbs. 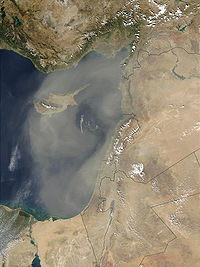 The Mediterranean climate, warm and rather dry, with rainfall mainly between November and March, favors agriculture. In general, the island experiences mild wet winters and dry hot summers. Variations in temperature and rainfall are governed by altitude and, to a lesser extent, distance from the coast. Hot, dry summers from mid-May to mid-September and rainy, rather changeable winters from November to mid-March are separated by short autumn and spring seasons.

Municipalities and communities map of Cyprus

Population distribution of Cyprus in 1960

Resource and land use