Oman is a country situated in Southwest Asia, bordering the Arabian Sea, Gulf of Oman, and Persian Gulf, between Yemen and United Arab Emirates (UAE).

Oman is located in the southeastern quarter of the Arabian Peninsula and covers a total land area of 309,500 square kilometers. The land area is composed of varying topographic features: valleys and desert account for 82 percent of the land mass; mountain ranges, 15 percent; and the coastal plain, 3 percent.

The sultanate is flanked by the Gulf of Oman, the Arabian Sea, and the Rub' al Khali (Empty Quarter) of Saudi Arabia, all of which contributed to Oman's isolation. Historically, the country's contacts with the rest of the world were by sea, which not only provided access to foreign lands but also linked the coastal towns of Oman. The Rub al Khali, difficult to cross even with modern desert transport, formed a barrier between the sultanate and the Arabian interior. The Al Hajar Mountains, which form a belt between the coast and the desert from the Musandam Peninsula (Ras Musandam) to the city of Sur at Oman's easternmost point, formed another barrier. These geographic barriers kept the interior of Oman free from foreign military encroachments. 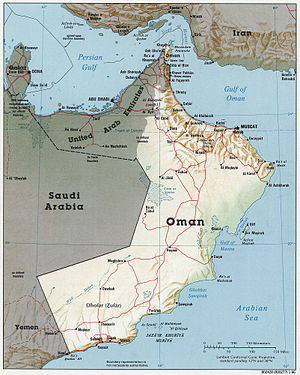 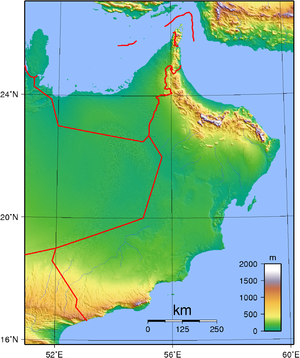 Natural features divide the country into seven distinct areas: Ruus al Jibal, including the northern Musandam Peninsula; the Al Batinah plain running southeast along the Gulf of Oman coast; the Oman interior behind the Al Batinah coast comprising the Al Hajar Mountains their foothills, and desert fringes; the coast from Muscat-Matrah around the Ras al Hadd point and down the Arabian Sea; the offshore island of Masirah; and finally the barren coastline south to the Dhofar region in the south.

Except for the foggy and fertile Dhofar all of the coast and the lowlands around the Al Hajar mountains are part of the Gulf of Oman desert and semi-desert ecoregion, while the mountains themselves are a distinct habitat.

The northernmost area, Ruus al Jibal, extends from the Musandam Peninsula to the boundary with the United Arab Emirates (UAE) at Hisn al Diba. It borders the Strait of Hormuz, which links the Persian Gulf with the Gulf of Oman, and is separated from the rest of the sultanate by a strip of territory belonging to the UAE. This area consists of low mountains forming the northernmost extremity of the Al Hajar al Gharbi (Western Al Hajar) Mountains. Two inlets, Elphinstone (Khawr ash Shamm) and Malcom (Ghubbat al Ghazirah), cleave the coastline about one third of the distance from the Strait of Hormuz and at one point are separated by only a few hundred meters of land. The coastline is extremely rugged, and the Elphinstone Inlet, sixteen kilometers long and surrounded by cliffs 1,000 to 1,250 meters high, has frequently been compared with fjords in Norway.

The UAE territory separating Ruus al Jibal from the rest of Oman extends almost as far south as the coastal town of Shinas. A narrow, well-populated coastal plain known as Al Batinah runs from the point at which the sultanate is reentered to the town of As Sib, about 140 kilometers to the southeast. Across the plains, a number of wadis, heavily populated in their upper courses, descend from the Al Hajar al Gharbi Mountains to the south. A ribbon of oases, watered by wells and underground channels (falaj), extends the length of the plain, about ten kilometers inland.

South of As Sib, the coast changes character. For about 175 kilometers, from As Sib to Ras al Hadd, it is barren and bounded by cliffs almost its entire length; there is no cultivation and little habitation. Although the deep water off this coast renders navigation relatively easy, there are few natural harbors or safe anchorages. The two best are at Muscat and Matrah, where natural harbors facilitated the growth of cities centuries ago.

Coastal tract, and island of Masirah

The desolate coastal tract from Jalan to Ras Naws has no specific name. Low hills and wastelands meet the sea for long distances. Midway along this coast and about fifteen kilometers offshore is the barren Masirah island. Stretching about seventy kilometers, the island occupies a strategic location near the entry point to the Gulf of Oman from the Arabian Sea. Because of its location, it became the site of military facilities used first by the British and then by the United States, following an access agreement signed in 1980 by the United States and Oman.

West of the coastal areas lies the tableland of central Oman. The Al Hajar Mountains form two ranges: the Al Hajar al Gharbi Mountains and the Al Hajar ash Sharqi (Eastern Al Hajar) Mountains. They are divided by the Wadi Samail (the largest wadi in the mountain zone), a valley that forms the traditional route between Muscat and the interior. The general elevation is about 1,200 meters, but the peaks of the high ridge known as Jebel Akhdar (Green Mountain), rise to more than 3,000 m. Jabal Akhdar is the only home of the Arabian tahr, a unique species of wild goat. In the hope of saving this rare animal, Sultan Qabus ibn Said has declared part of the mountain a national park. Behind the Al Hajar al Gharbi Mountains are two inland regions, Az Zahirah and Inner Oman, separated by the lateral range of the Rub al Khali. Adjoining the Al Hajar ash Sharqi Mountains are the sandy regions of Ash Sharqiyah and Jalan, which also border the desert.

Dhofar region extends from Ras ash Sharbatat to the border of Yemen and north to the clearly defined border with Saudi Arabia. Its capital, Salalah, was the permanent residence of Sultan Said ibn Taimur Al Said and the birthplace of the present sultan, Qabus ibn Said. The highest peaks are about 2,000 meters. The coast of Dhofar is fertile, being watered by monsoonal fogs from the Indian Ocean and is part of the Arabian Peninsula coastal fog desert ecoregion. 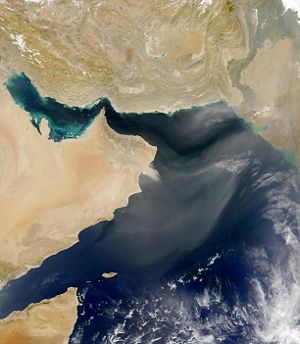 SeaWiFS captured this dust cloud blowing out over the Arabian Sea from Oman. March 12, 2000

With the exception of Dhofar region, which has a strong monsoon climate and receives warm winds from the Indian Ocean, the climate of Oman is extremely hot and dry most of the year.

Summer begins in mid-April and lasts until October. The highest temperatures are registered in the interior, where readings of more than 53 °C (127.4 °F) in the shade are common. On the Al Batinah plain, summer temperatures seldom exceed 47 °C (116.6 °F), but, because of the low elevation, the humidity may be as high as 90 percent. The mean summer temperature in Muscat is 33 °C (91.4 °F), but the gharbi (literally, western), a strong wind that blows from the Rub al Khali, can raise temperatures from the towns on the Gulf of Oman by 6 °C (10.8 °F) to 10 °C (18 °F).

Precipitation on the coasts and on the interior plains ranges from 20 to 100 millimeters (0.8 to 3.9 in) a year and falls during mid- and late winter. Rainfall in the mountains, particularly over Jebel Akhdar, is much higher and may reach 900 millimeters (35.4 in).

Because the plateau of Jebel Akhdar is porous limestone, rainfall seeps quickly through it, and the vegetation, which might be expected to be more lush, is meager. However, a huge reservoir under the plateau provides springs for low-lying areas. In addition, an enormous wadi channels water to these valleys, making the area agriculturally productive in years of good rainfall.

Dhofar, benefiting from a southwest monsoon between June and September, receives heavier rainfall and has constantly running streams, which make the region Oman's most fertile area.

Occasionally, a cyclone from the North Indian Ocean makes landfall, bringing with it heavy rain, such as Cyclone Kelia did in 2011. Oman was hit by Cyclone Gonu on June 6. Large areas in the capital area region in the Governorate of Muscat and in Amerat and Quriyat were severely affected. Gonu first hit the southern city of Sur late on June 5, 2007.[1] Oman is one of the few countries with no National Red Crescent or Red Cross Society.

Resources and land use

Natural hazards: Summer winds often raise large sandstorms and dust storms in the interior during periodic droughts. Following rain, Wadis can fill with rainwater water and vast tracts of land can be flooded. A cyclone making landfall can severely flood large areas, or blow sand all over the place.

Geographical note: Oman is in a strategic location on Musandam Peninsula adjacent to Strait of Hormuz, a vital transit point for world crude oil