The geography of Georgia entails the physical and human geography of Georgia, a country in the Caucasus region of Eurasia. Situated at the juncture of Western Asia and Eastern Europe,[2] it is bounded to the west by the Black Sea, to the north by Russia, to the south by Turkey and Armenia, and to the east by Azerbaijan. Georgia covers an area of 69,875 km².

Georgia is located in the mountainous South Caucasus region of Eurasia, straddling Western Asia and Eastern Europe[2] between the Black Sea and the Caspian Sea. Georgia's northern border with Russia roughly runs along the crest of the Greater Caucasus mountain range – a commonly reckoned boundary between Europe and Asia. In Philip Johan von Strahlenberg's 1730 definition of Europe, which was used by the Russian Tsars and which first set the Urals as the eastern border of the continent, the continental border was drawn from the Kuma-Manych Depression to the Caspian Sea, thereby including all of Georgia (and the whole of the Caucasus) in Asia.

Georgia's proximity to the bulk of Europe, combined with various cultural and political factors, has led increasingly to the inclusion of Georgia in Europe. Some sources place the country in that region;[2] as well, Georgia has joined European organizations such as the Council of Europe, and is seeking membership in NATO and accession to the European Union. 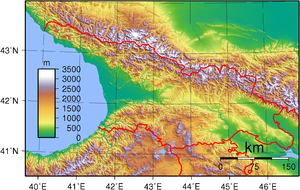 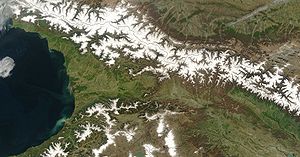 Despite its small area, Georgia has one of the most varied topographies of the former Soviet republics. Georgia lies mostly in the Caucasus Mountains, and its northern boundary is partly defined by the Greater Caucasus range. The Lesser Caucasus range, which runs parallel to the Turkish and Armenian borders, and the Surami and Imereti ranges, which connect the Greater Caucasus and the Lesser Caucasus, create natural barriers that are partly responsible for cultural and linguistic differences among regions. Because of their elevation and a poorly developed transportation infrastructure, many mountain villages are virtually isolated from the outside world during the winter. Earthquakes and landslides in mountainous areas present a significant threat to life and property. Among the most recent natural disasters were massive rock- and mudslides in Ajaria in 1989 that displaced thousands in southwestern Georgia, and two earthquakes in 1991 that destroyed several villages in northcentral Georgia and South Ossetia.

Georgia has about 25,000 rivers, many of which power small hydroelectric stations. Drainage is into the Black Sea to the west and through Azerbaijan to the Caspian Sea to the east. The largest river is the Mtkvari (formerly known by its Azerbaijani name, Kura, which is still used in Azerbaijan), which flows 1,364 km from northeast Turkey across the plains of eastern Georgia, through the capital, Tbilisi, and into the Caspian Sea. The Rioni River, the largest river in western Georgia, rises in the Greater Caucasus and empties into the Black Sea at the port of Poti. Soviet engineers turned the river lowlands along the Black Sea coast into prime subtropical agricultural land, embanked and straightened many stretches of river, and built an extensive system of canals. Deep mountain gorges form topographical belts within the Greater Caucasus.

Georgia's climate is affected by subtropical influences from the west and Mediterranean influences from the east. The Greater Caucasus range moderates local climate by serving as a barrier against cold air from the north. Warm, moist air from the Black Sea moves easily into the coastal lowlands from the west. Climatic zones are determined by distance from the Black Sea and by altitude. Along the Black Sea coast, from Abkhazia to the Turkish border, and in the region known as the Kolkhida Lowlands inland from the coast, the dominant subtropical climate features high humidity and heavy precipitation (1,000 to 2,000 mm/39.4 to 78.7 in per year; the Black Sea port of Batumi receives 2,500 mm/98.4 in per year). Several varieties of palm trees grow in these regions, where the midwinter average temperature is 5 °C (41 °F) and the midsummer average is 22 °C (71.6 °F).

At higher elevations, precipitation is sometimes twice as heavy as in the eastern plains. In the west, the climate is subtropical to about 650 m (2,133 ft); above that altitude (and to the north and east) is a band of moist and moderately warm weather, then a band of cool and wet conditions. Alpine conditions begin at about 2,100 m (6,890 ft), and above 3,600 m (11,811 ft) snow and ice are present year-round.

Beginning in the 1980s, Black Sea pollution has greatly harmed Georgia's tourist industry. Inadequate sewage treatment is the main cause of that condition. In Batumi, for example, only 18 percent of wastewater is treated before release into the sea. An estimated 70 percent of surface water contains health-endangering bacteria to which Georgia's high rate of intestinal disease is attributed.

The war in Abkhazia did substantial damage to the ecological habitats unique to that region. In other respects, experts considered Georgia's environmental problems less serious than those of more industrialized former Soviet republics. Solving Georgia's environmental problems was not a high priority of the national government in the post-Soviet years, however; in 1993 the minister for protection of the environment resigned to protest this inactivity. In January 1994, the Cabinet of Ministers announced a new, interdepartmental environmental monitoring system to centralize separate programs under the direction of the Ministry of Protection of the Environment. The system would include a central environmental and information and research agency. The Green Party used its small contingent in the parliament to press environmental issues in 1993.