:"This article is about the terrestrial Eurasian mountain range. For other meanings, see and .Geobox |Range
name=Caucasus Mountains 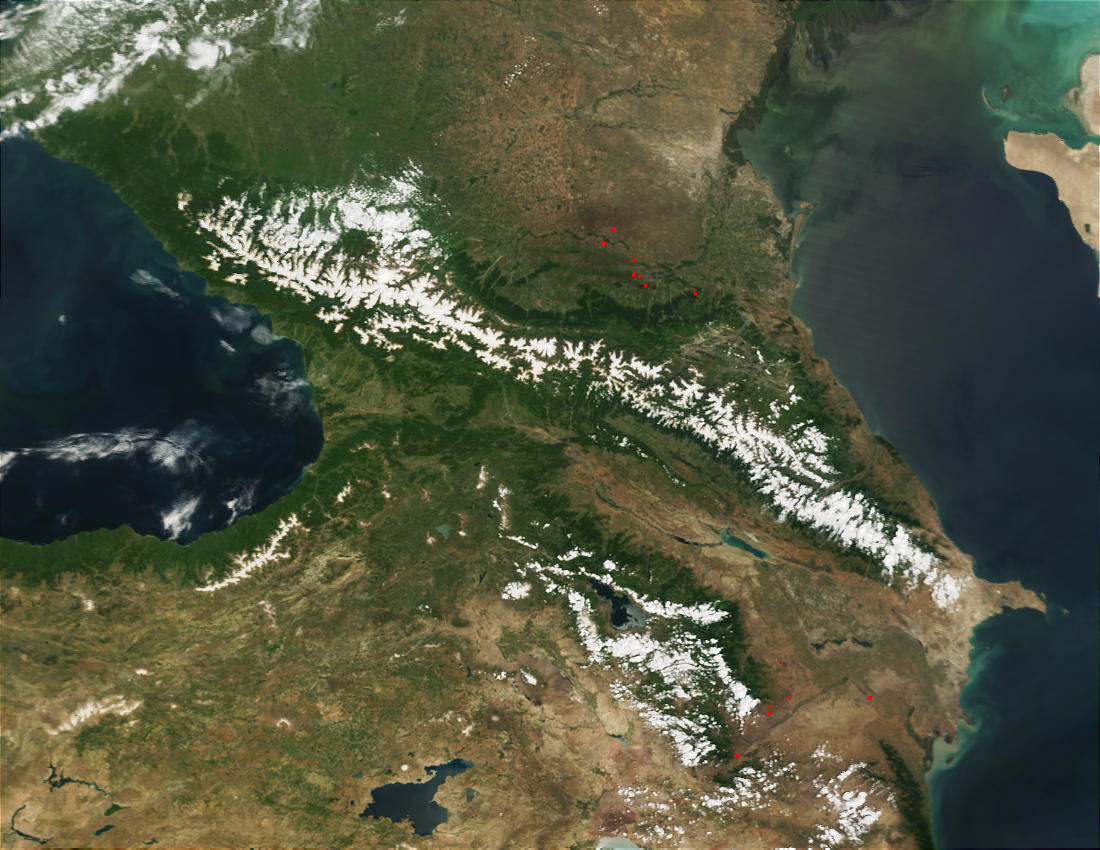 map_caption=Satellite imageThe Caucasus Mountains are a mountain system in between the Black and the Caspian in the region.

The "Greater Caucasus Range" extends from the Caucasian Natural Reserve in the vicinity of on the northeastern shore of the Black Sea, generally trending east-southeast and reaching nearly to on the Caspian Sea, while the "Lesser Caucasus" runs parallel to the greater range, at a distance averaging about 100 km (60 mi) south. is a part of the Lesser Caucasus system. The Greater and Lesser Caucasus ranges are connected by the , which separates the from the Kura Depression (Kura Lowland). In the South-East are the . The Lesser Caucasus and the constitute the . The highest peak in the Caucasus range is in the Greater Caucasus, which rises to a height of 18,506 feet (5,642 meters) above sea level. Mountains near Sochi will host part of the .

The Caucasus Mountains formed ca. 28.49&ndash;23.8 million years ago as the result of a tectonic plate collision between the moving northward with respect to the . The mountain system forms a continuation of the , which are being pressed upwards by a similar collision zone with the Eurasian and s. The entire region is regularly subjected to strong s from this activity, especially as the fault structure is complex with the Anatolia/Turkey and Iranian Blocks flowing sidewise, which prevents subduction of the advancing plate edge and hence the lack of volcanoes on the Greater Caucasus Mountain RangeFact|date=July 2007 (although stratovolcanoes such as , Mount and others do exist). The Lesser Caucasus Mountains on the other hand, are largely of origin. The in Georgia and the surrounding volcanic ranges which extend well into central are some of the youngest and the most unstable geological features of the region.

There are large , , (estimated reserves: up to 200 billion barrels) and numerous deposits found in the area.

There is no clear agreement on whether the Caucasus Mountains are a part of or . Depending on the varying perspectives, Europe's highest mountain is either m to ft|5642|abbr=yes or in the , at the Italian-French border, with a height of m to ft|4810|abbr=yes.

The Caucasus Mountains are located in the middle of the between Europe and Asia. Because the plate is geologically stable in this region, it is hard to determine the exact course of the continental borderline. Therefore, throughout history the borderline has changed from one place to another. The ancient saw the and the Caucasus Mountains as the border of Europe. Later this view changed several times for political reasons. In the and the , Bosphorus and the river Don divided the two continents.

The border was historically defined by the Swedish military officer and , who suggested the border follow the peaks of the Urals, and then the lower Emba and the coast of the Caspian Sea, before passing through the , which lies 300 km north of the Caucasus Mountains. In , this course was approved by the n and since then was adopted by many scientists.Following this definition, the mountains are a part of Asia and according to this view, the highest European mountain is .

On the other hand, clearly draws the border between Europe and Asia south of both Caucasian mountain ranges.Fact|date=September 2007 Both and are here European mountains.

In political terms, the present-day division is either considered to be between (Europe) on one side and Georgia, and (Asia) on the other, inclusive of Georgia and Azerbaijan within Europe but not Armenia, or inclusive of all three nations.

The table below lists some of the highest peaks of the Caucasus. With the exception of , the heights are taken from Soviet 1:50,000 mapping. There are higher and more prominent, but nameless, peaks than some of the peaks included below.

See also: [http://www.peaklist.org/WWlists/ultras/CaucasusP1500m.html List of the most prominent mountains in the Caucasus]

The climate of the Caucasus varies both vertically (according to elevation) and horizontally (by latitude and location). Temperature generally decreases as elevation rises. Average annual temperature in , at sea level is 15 degrees Celsius while on the slopes of Mt. at an elevation of 3700 meters, average annual temperature falls to -6.1 degrees Celsius. The northern slopes of the Greater Caucasus Mountain Range are 3 degrees (Celsius) colder than the southern slopes. The highlands of the Lesser Caucasus Mountains in , , and Georgia are marked by sharp temperature contrasts between the summer and winter months due to a more continental climate.

Snow cover in several regions (, northern ) may reach 5 meters (16.4 feet). The Mt. region, which is the snowiest place in the Caucasus, often records snow depths of 7 meters (23 feet).

The Caucasus Mountains have a varied landscape which mainly changes vertically and according to the distance from large bodies of water. The region contains ranging from subtropical low-land marshes/forests to (Western and Central Caucasus) as well as highland s/s and s in the south (mainly and ).

"Parts of this article are from the ; [http://earthobservatory.nasa.gov/Newsroom/NewImages/images.php3?img_id=15340] "

*Small Nations and Great Powers: A Study of Ethnopolitical Conflict in the Caucasus By Svante E. Cornell