Greek Cypriots (Greek: Ελληνοκύπριοι, Ellinokýprioi; Turkish: Kıbrıslı Rumlar) are the ethnic Greek population of Cyprus,[2][3][4][5] forming the island's largest ethnolinguistic community at 77% of the population.[6] Greek Cypriots are mostly members of the Church of Cyprus, an autocephalous Greek Orthodox Church within the wider communion of Orthodox Christianity.[4][7] In regards to the 1960 Constitution of Cyprus, the term also includes Arabic-speaking Maronites, Armenians and Latin Rite Catholics ("Latins"), who were given the option of being included in one or other of the two constituent communities (Greek or Turkish) and voted to join the Greek Cypriot community. 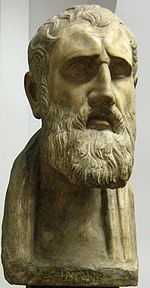 Zeno of Citium, founder of the Stoic school of philosophy. 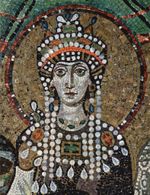 Empress Theodora, wife of Justinian I. 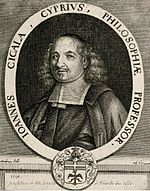 Ioannis Kigalas ( ca. 1622 – 1687) was a Nicosia born Greek Cypriot scholar and professor of Philosophy who was largely active in Padova and Venice.[8] 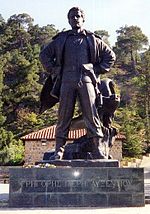 The Greek Cypriots trace their origins to the descendants of the Mycenaean Greeks who settled on the island during the second half of the second millennium BC. Cyprus is the third largest island in the Mediterranean after Sicily and Sardinia, and the largest island in the eastern Mediterranean. Mount Olympus (also known as Chionistra), the highest point of the Troodos Mountains (1952 m), is the highest point on the island. The island gradually became part of the Hellenic world as the settlers prospered over the next centuries. Alexander the Great liberated the island from the Persians in 333 BC. After the division of the Roman Empire in 285 AD, Cypriots enjoyed home rule for almost nine centuries under the jurisdiction of the Byzantine Empire, something not seen again until 1960. Perhaps the most important event of the early Byzantine period was the local church's independence from the Patriarchate of Antioch and All the East in 431. The bishop of the ancient capital Salamis (renamed Constantia by Emperor Constantius II) was constituted metropolitan by Emperor Zeno, with the title archbishop.

The Byzantine era profoundly molded Greek Cypriot culture. The Greek Orthodox Christian legacy bestowed on Greek Cypriots in this period would live on during the succeeding centuries of foreign domination. Because Cyprus was never the final goal of any external ambition, but simply fell under the domination of whichever power was dominant in the eastern Mediterranean, destroying its civilization was never a military objective or necessity.

The Cypriots did however endure the oppressive rule of first the Lusignans and then the Venetians from the 1190s through to 1570. King Amaury, who succeeded his brother Guy de Lusignan in 1194, was particularly intolerant of the Orthodox Church. Greek Cypriot land was appropriated for the Latin churches after they were established in the major towns on the island. In addition, tax collection was also part of the heavy oppressive attitude of the occupiers to the locals of the island, in that it was now being conducted by the Latin churches themselves.

The Ottoman conquest of Cyprus in 1571 delivered the Greek population from serfdom and servitude to the Latin church. Cypriot Greeks were now able to take control of the land they had been working on for centuries. The local Christians resumed practicing their religion in the only acceptable way they knew. The patriarch serving the Ottoman sultan also acted as ethnarch, or leader of the Greek nation, thus enabling the local Orthodox representative to practice decidedly secular powers, for instance in adjudicating justice and in the collection of taxes.

Despite the inherent oppression of foreign subjugation, the period of Ottoman rule (1570-1878) had a limited impact on Greek Cypriot culture. The Ottomans tended to administer their multicultural empire with the help of their subject millets, or religious communities. The tolerance of the millet system permitted the Greek Cypriot community to survive, administered on behalf of Constantinople by the Archbishop of the Church of Cyprus, who became the community's head, or ethnarch. Although religiously tolerant, Ottoman rule was generally harsh and inefficient. Turkish settlers suffered alongside their Greek Cypriot neighbors, and the two groups together endured centuries of oppressive governance from Constantinople. A minority of Greek Cypriots converted to Islam during this period, and are sometimes referred to as "neo-Muslims" by historians.[9][10]

Cypriot cuisine, as with Greek cuisine, was imprinted with the spices and herbs made common as a result of extensive trade links within the Ottoman Empire. Names of many dishes came to reflect the sources of the ingredients from the many lands under the Ottoman rule. Coffee houses pervasively spread throughout the island into all major towns and countless villages.

Politically, the concept of enosis—unification with the Greek "motherland"—became important to literate Greek Cypriots after Greece declared its independence from the Ottoman Empire in 1821. A movement for the realization of enosis gradually formed, in which the Church of Cyprus played a dominant role (see "Cyprus dispute").

During British rule (1878–1960), the British brought an efficient colonial administration, but government and education were administered along ethnic lines, accentuating differences. For example, the education system was organized with two Boards of Education, one Greek and one Turkish, controlled by Athens and Istanbul, respectively.[citation needed] The resulting education emphasized linguistic, religious, cultural, and ethnic differences and ignored traditional ties between the two Cypriot communities.[citation needed] The two groups were encouraged to view themselves as extensions of their respective motherlands, and the development of two distinct nationalities with antagonistic loyalties was ensured.[citation needed]

The importance of religion within the Greek Cypriot community was reinforced when the Archbishop of the Church of Cyprus, Makarios III, was elected the first president of the Republic of Cyprus in 1960. For the next decade and a half, enosis was a key issue for Greek Cypriots, and a key cause of events leading up to 1974 when Turkey invaded and occupied the northern part of the island. The island remains divided today, with the two communities almost completely separated. Many Greek Cypriots, most of whom lost their homes, lands and possessions during the Turkish invasion, emigrated mainly to the UK, USA, Australia, South Africa and Europe. There are today estimated to be 335,000 Greek Cypriot emigrants living in Great Britain. The majority of the Greek Cypriots in Great Britain currently live in England; there is an estimate of around 3,000 in Wales and 1,000 in Scotland. By the early 1990s, Greek Cypriot society enjoyed a high standard of living. Economic modernization created a more flexible and open society and caused Greek Cypriots to share the concerns and hopes of other secularized West European societies. The Republic of Cyprus joined the European Union in 2004, officially representing the entire island, but suspended for the time being in the Turkish occupied north. 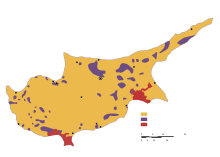 The beige areas are administered by Greek Cypriots.

The Greek Cypriot dialect is a member of the south-eastern group of modern Greek dialects. It shares common characteristics with the dialects of the Dodecanese islands as well as those of Asia Minor. The dialect does not have a common form but is divided into a number of distinct local varieties.