Arvanitika also known Arvanitic (Arvanitika: αρbε̰ρίσ̈τ arbërisht, Greek: αρβανίτικα arvanitika) is the variety of Albanian traditionally spoken by the Arvanites, a population group in Greece. Arvanitika is today an endangered language, as its speakers have been shifting to the use of Greek and most younger members of the community no longer speak it.[2]

The name Arvanítika and its native equivalent Arbërisht[3] are derived from the ethnonym Arvanites, which in turn comes from the toponym Arbëna (Greek: Άρβανα), which in the Middle Ages referred to a region in what is today Albania (Babiniotis 1998). Its native equivalents (Arbërorë, Arbëreshë and others) formerly were the self-designation of Albanians in general. In the past Arvanitika had sometimes been described as "Graeco-Albanian" and the like (e.g. Furikis, 1934), although today many Arvanites consider such names offensive, as they identify nationally and ethnically as Greeks and not Albanians.[4] 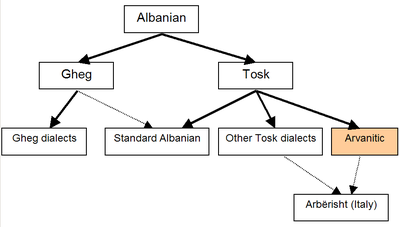 The place of Arvanitika within Albanian

Arvanitika was brought to southern Greece during the late Middle Ages by settlers from what is today Albania. Arvanitika is also closely related to Arbëresh, the dialect of Albanian in Italy, which largely goes back to Arvanite settlers from Greece. Italian Arbëresh has retained some words borrowed from Greek (for instance haristis 'thank you', from ευχαριστώ; dhrom 'road', from δρόμος; Ne 'yes', from ναι, in certain villages). Italo-Arbëresh and Graeco-Arvanitika have a mutually intelligible vocabulary base, the unintelligible elements of the two dialects stem from the usage of Italian or Greek modernisms in the absence of native ones.

While linguistic scholarship unanimously describes Arvanitika as a dialect of Albanian[5] many Arvanites are reported to dislike the use of the name "Albanian" to designate it,[4] as it carries the connotation of Albanian nationality and is thus felt to call their Greek identity into question.

Owing to its special social circumstances and ethnolinguistic identity, Arvanitika is currently listed as a separate entry ("Arvanitika Albanian", code "aat") in the draft international ISO 639-3 catalogue of language names,[6] where it is categorised as part of an Albanian "macrolanguage".[7] Similarly, the Ethnologue lists a separate sub-entry for "Albanian, Arvanitika",[8] along with parallel entries for Gheg Albanian, Tosk Albanian and Arbëresh.[9] There is no entry for Arvanitika in parts 1 and 2 of the international ISO 639 standard of language codes, which only has a single entry for Albanian (codes "alb", "sqi", or "sq").

Sociolinguistic work[10] has described Arvanitika within the conceptual framework of "ausbausprachen" and "abstandssprachen".[11] In terms of "abstand" (objective difference of the linguistic systems), linguists' assessment of the degree of mutual intelligibility between Arvanitika and Standard Tosk range from fairly high[12] to only partial (Ethnologue). The Ethnologue also mentions that mutual intelligibility may even be problematic between different subdialects within Arvanitika. Mutual intelligibility between Standard Tosk and Arvanitika is higher than that between the two main dialect groups within Albanian, Tosk and Gheg. See below for a sample text in the three language forms. Trudgill (2004: 5) sums up that "[l]inguistically, there is no doubt that [Arvanitika] is a variety of Albanian".

In terms of "ausbau" (sociolinguistic "upgrading" towards an autonomous standard language), the strongest indicator of autonomy is the existence of a separate writing system, the Greek-based Arvanitic alphabet. A very similar system was formerly in use also by other Tosk Albanian speakers between the 16th and 18th century.[13] However, this script is very rarely used in practice today, as Arvanitika is almost exclusively a spoken language confined to the private sphere. There is also some disagreement amongst Arvanites (as with the Aromanians) as to whether the Latin alphabet should be used to write their language.[4] Spoken Arvanitika is internally richly diversified into sub-dialects, and no further standardization towards a common (spoken or written) Standard Arvanitika has taken place. At the same time, Arvanites do not use Standard Albanian as their standard language either, as they are generally not literate in the Latin-based standard Albanian orthography, and are not reported to use spoken-language media in Standard Albanian. In this sense, then, Arvanitika is not functionally subordinated to Standard Albanian as a dachsprache ("roof language"), in the way dialects of a national language within the same country usually are. 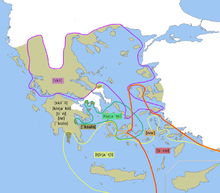 Map of traditional Modern Greek dialectual isoglosses. The white area in the middle represents where Arvanitika was the common language before the 20th century. 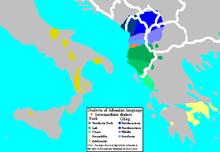 According to some authors, the term "Arvanitika" in its proper sense applies only to the southern group [14] or to the southern and the Thracian groups together [15] i.e. to those dialects that have been separated from the core of Albanian for several centuries. The dialects in the northwest are reported to be more similar to neighbouring Tosk dialects within Albania and to the speech of the former Muslim Cham Albanians (Çamërishte), who used to live in the same region.[16] These dialects are classified by Ethnologue as part of core Tosk Albanian, as opposed to "Arvanitika Albanian" in the narrow sense, although Ethnologue notes that the term "Arvanitika" is also often applied indiscriminately to both forms in Greece.[17] In their own language, some groups in the north-west are reported to use the term Shqip (Albanian language) to refer to their own language as well as to that of Albanian nationals, and this has sometimes been interpreted as implying that they are ethnically Albanians.[18] 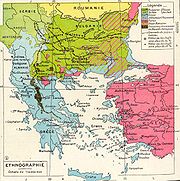 Ethnic composition of the Balkans according to the Atlas Général Vidal-Lablache, Librairie Armand Colin, Paris, 1898. The Albanian-speaking regions (including Arvanitika) are indicated in a shade of very light blue.

Estimated numbers of speakers of Arvanitika vary widely, between 30,000 and 150,000. These figures include "terminal speakers" (Tsitsipis 1998) of the younger generation, who have only acquired an imperfect command of the language and are unlikely to pass it on to future generations. The number of villages with traditional Arvanite populations is estimated to more than 500.[1] There are no monolingual Arvanitika-speakers, as all are today bilingual in Greek. Arvanitika is considered an endangered language due to the large-scale language shift towards Greek among the descendants of Arvanitika-speakers in recent decades.[19]

Arvanitika shares many features with the Tosk dialect spoken in Southern Albania. However, it has received a great deal of influence from Greek, mostly related to the vocabulary and the phonological system. At the same time, it is reported to have preserved some conservative features that were lost in mainstream Albanian Tosk. For example, it has preserved certain syllable-initial consonant clusters which have been simplified in Standard Albanian (cf. Arvanitika gljuhë Albanian pronunciation: [ˈɡljuhə] ('language/tongue'), vs. Standard Albanian gjuhë [ˈɟuhə]). In recent times, linguists have observed signs of accelerated structural convergence towards Greek and structural simplification of the language, which have been interpreted as signs of "language attrition", i.e. effects of impoverishment leading towards language death.[20] 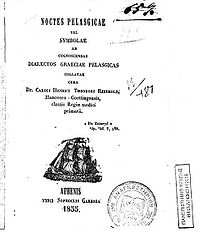 Comparison with other forms of Albanian