The tenge (Kazakh: теңге, teñge) is the currency of Kazakhstan. It is divided into 100 tïın (тиын, also transliterated as tiyin or tijn). It was introduced on 15th of November 1993 to replace the Soviet ruble at a rate of 1 tenge = 500 rubles. The ISO-4217 code is KZT.

The word tenge in the Kazakh and most other Turkic languages means a set of scales (cf the old Uzbek tenga or the Tajik borrowed term tanga). The origin of the word is the Turkic teğ- which means being equal, balance. The name of this currency is thus similar to the lira, pound and peso. The name of the currency is related to the Russian word for money Russian: деньги / den'gi, which was borrowed from Turkic.

Kazakhstan was one of the last countries of the CIS to introduce a national currency. In 1991 a "special group" of designers was created: Mendybay Alin, Timur Suleymenov, Asimsaly Duzelkhanov and Khayrulla Gabzhalilov. On November 12, 1993, a decree of the President of Kazakhstan, "About introducing national currency of Republic of Kazakhstan", was issued. On November 15, 1993, the tenge was brought into circulation. As such, November 15 is celebrated as the "Day of National Currency of Republic of Kazakhstan". In 1995, a tenge printing factory was opened in Kazakhstan. The first consignment of tenge was printed abroad, in the U.K.. The first coins were minted in Germany.

The new symbol for the Kazakhstani tenge.

On March 20, 2007 two days before the Nauryz holiday, the National Bank of Kazakhstan approved a graphical symbol for the Tenge:

. The character was proposed for encoding in Unicode in March 2008[1] It was released at the codepoint U+20B8 ₸ tenge sign as of Unicode 5.2.[2] It resembles the Japanese postal mark. 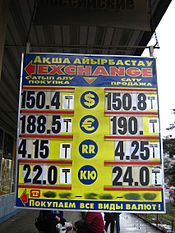 The National Bank of Kazakhstan issued banknotes of new series in 2006. They have the same values as the previously existed ones.

The 2006 series is far more exotic than its predecessors. The obverse is vertical and the denomination is written in Kazakh. All denominations depict the Astana Bayterek monument, the flag of Kazakhstan, the Coat of arms, the handprint with a signature of president Nazarbayev and fragments of the national anthem. The main differences across each denomination are only the colours, the values, the underprint patterns.

On the contrast, the reverses are more differentiated. The value is written in Russian. Each denomination shows a unique building and geography of Kazakhstan in the outline of Kazakhstan border.

The first printing of the 2,000 and 5,000 tenge notes issued in 2006 had misspellings of the word for "bank" (the correct spelling "банкі" was misspelled "банқі"). The misspelling was a politically sensitive issue due to the cultural and political importance of the Kazakh language.[4]

5,000 tenge issued banknote in 2001 to commemorate the 10th anniversary of independence from the Soviet Union.

5,000 tenge banknote issued in 2008 to commemorate 15 years of the Kazakhstani tenge.

1,000 tenge banknote issued in 2010 to commemorate the Chairmanship of Kazakhstan in the OSCE.

1,000 tenge banknote issued in 2011 to commemorate Kazakhstan's chairmanship in the Organisation of the Islamic Conference.

2,000 tenge banknote issued in 2011 to commemorate the 7th Asian Winter Games in Astana.

10,000 tenge banknote issued in 2011 to commemorate the 20th anniversary of independence from the Soviet Union.