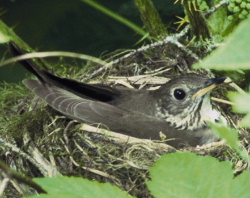 "Catharus" is a of s in the thrush family . It contains the small, mostly insectivorous or omnivorous migrant thrushes of and the nightingale-thrushes of Central and . Its closest relative is the of the genus "Hylocichla" (Winker & Pruett, 2006) which is sometimes merged into "Catharus".

This is a typical New World thrush genus, although representatives of other genera, such as the es ("Turdus") also occur in the region, especially in Central and .

The "Catharus" species are either long-distance migrants or fairly resident birds. They were sometimes split according to this and morphological characters, the migrant group occasionally including the Wood Thrush also. Comparison of cytochrome "b" and 2 as well as nuclear β-fibrinogen 7 sequence data indicates that this is incorrect (Winker & Pruett, 2006).

Due to the adaptational requirements of the independently acquired long-distance migrant lifestyle, several apparent morphological similarities between supposedly related species are actually due to . It seems that the genus originated in or forest s of northern Central America, and that every so often species diverged to settle more northerly regions, subsequently finding themselves forced to migrate south in winter into more food-rich habitat. The most ancient of these northward divergences was probably , and the most recent one the "fuscescens-minimus-bicknelli" .