The post-Soviet states, also commonly known as the Former Soviet Union (FSU) [1][2][3] or former Soviet republics, are the 15 independent states that split off from the Union of Soviet Socialist Republics in its dissolution in December 1991. They were also referred to as the Newly Independent States (NIS), notwithstanding that the Baltic states consider themselves to have resumed their pre–World War II sovereignty upon their separation from the Soviet Union.[4] 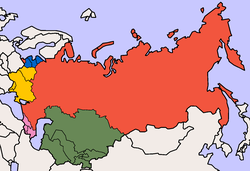 Common groupings of the post-Soviet states:

The 15 post-Soviet states are typically divided into the following five groupings. Each of these regions has its own common set of traits, owing not only to geographic and cultural factors but also to that region's history in relation to Russia. In addition, there are a number of de facto independent, but internationally unrecognized states (see the section Separatist conflicts below).

The dissolution of the Soviet Union took place as a result and against the backdrop of general economic stagnation, even regression. As the Gosplan, which had deliberately set up production chains to cross SSR lines, broke down, the inter-republic economic connections were also disrupted, leading to even more serious breakdown of the post-Soviet economies.

Most of the formerly Soviet states began the transition to a market economy in 1990-1991 and made efforts to rebuild and restructure their economic systems, with varying results. The process triggered a severe transition decline, with Gross Domestic Product (GDP) dropping by more than 40% between 1990 and 1995.[5] This decline in GDP was much more intense than the 27% decline that the United States suffered in the wake of the Great Depression between 1930 and 1934.[6] The reconfiguration of public finance in compliance with the principles of market economy resulted in dramatically reduced spending on health, education and other social programs, leading to a sharp increase in poverty.[7]

The initial transition decline was eventually arrested by the cumulative effect of market reforms, and after 1995 the economy in the post-Soviet states began to recover, with GDP switching from negative to positive growth rates. By 2007, 10 of the 15 post-Soviet states had reached GDP greater than what they had in 1991.[8] Only Moldova, Ukraine, Georgia, Kyrgyzstan, and Tajikistan had GDP significantly below the 1991 level. The recovery in Russia was marginal, with GDP in 2006-2007 just nudging above the 1991 level. This could be perceived as failure of capitalism to improve the standard of living in Russia, and combined with the aftershocks of the 1998 economic crisis it led to a return of more interventionist economic policies by Vladimir Putin's administration.[citation needed]

*The year when GDP decline switched to GDP growth.

The Commonwealth of Independent States (CIS) consists of 11 former Soviet Republics that differ in their membership status. As of December 2010, 9 countries have ratified the CIS charter and are full CIS members (Armenia, Azerbaijan, Belarus, Moldova, Kazakhstan, Kyrgyzstan, Russia, Tajikistan, Uzbekistan), one country (Turkmenistan) is an associate member, one country (Ukraine) is a founding and participating country, but legally not a member country, and one country (Georgia) left the organization in 2009.

The Eurasian Economic Community (EURASEC) was established by Russia, Belarus, Kazakhstan, Kyrgyzstan and Tajikistan, having grown out of the CIS Customs Union. Ukraine and Moldova have observer status in the community; however, Ukraine has declared its desire not to become a full member state. Because having common borders with the rest of the community is a prerequisite for full membership, Moldova is barred from seeking it. Uzbekistan applied for membership in October 2005 [1], when the process of merging Central Asian Cooperation Organization and the Eurasian Economic Community began; it joined on 25 January 2006.

Russia, Belarus, Kazakhstan created a customs union that entered into force in July 2010. Kyrgyzstan, Tajikistan at the time[14] and Ukraine since[15] have indicated interest in joining.

In 1994, the CIS countries agreed to create a free trade area, but the agreements were never signed, so in 2009 a new agreement was reached to create an FTA by the end of 2010 or beginning of 2011.

Seven CIS member states, namely Russia, Belarus, Kazakhstan, Kyrgyzstan, Tajikistan, Uzbekistan and Armenia, have enhanced their military cooperation, establishing the Collective Security Treaty Organization (CSTO), this being an expansion of the previous Collective Security Treaty (CST). Uzbekistan which (alongside Georgia and Azerbaijan) withdrew from the CST in 1999, joined GUAM. Then in 2005 it withdrew from GUAM and currently it is again seeking closer ties with Russia (thus in 2006 it has joined EurAsEc and later CSTO). CSTO and EurAsEc are closely related organizations.

Three former Soviet states are members of NATO; Estonia, Latvia and Lithuania. Georgia, where both public opinion and the ruling government favor NATO membership, is in the Intensified Dialogue program with NATO. In Ukraine after the 2009 electoral victory of Viktor Yanukovych, the government officially declared neutrality and no longer seeks NATO membership, as it did after the Orange revolution and the presidency of Viktor Yushchenko.

Four member states, namely Georgia, Ukraine, Azerbaijan and Moldova established the GUAM group that was largely seen as intending to counter Russian dominance in the region. Notably, these four nations do not participate in any of the other regional organizations that sprang up in the region since the dissolution of the Soviet Union (other than the CIS).

Union of Russia and Belarus

The Economic Cooperation Organization was originally formed in 1985 by Turkey, Iran and Pakistan but in 1992 the organization was expanded to include Afghanistan and the six primarily Muslim former Soviet republics: Azerbaijan, Kazakhstan, Kyrgyzstan, Tajikistan, Turkmenistan and Uzbekistan.

The Community of Democratic Choice (CDC) was formed in December 2005 at the primary instigation of Ukraine and Georgia, and composed of six post-Soviet states (Ukraine, Georgia, Moldova, and the three Baltic states of Estonia, Latvia and Lithuania) and three other countries of Eastern Europe (Slovenia, Romania and the Republic of Macedonia). The Black Sea Forum (BSF) is a closely related organization.

Just like GUAM before it, this forum is largely seen as intending to counteract Russian influence in the area. This is the only international forum centered in the post-Soviet space in which the Baltic states also participate. In addition, the other three post-Soviet states in it are all members of GUAM.

The Shanghai Cooperation Organisation (SCO), is composed of China and five post-Soviet states, namely Russia, Kazakhstan, Kyrgyzstan, Tajikistan and Uzbekistan. The organization was founded in 2001, though its predecessor, the Shanghai Five grouping, has existed since 1996. Its aims revolve around security-related issues.

For political integration and security alliances

It has been remarked that several post-Soviet states have not changed leadership since their independence, such as Nursultan Nazarbayev in Kazakhstan and Islam Karimov in Uzbekistan. All of these had originally more limited terms but through decrees or referendums prolonged their stay in office (a practice also followed by Presidents Alexander Lukashenko of Belarus and Emomalii Rahmon of Tajikistan). Askar Akayev of Kyrgyzstan had likewise served as President since its independence until he was forced to resign as a result of the Kyrgyz revolution of 2005. Saparmurat Niyazov in Turkmenistan ruled from independence until his death in 2006, creating a personality cult around himself.

The issue of dynastical succession has been another element affecting the politics of some post-Soviet States, with Ilham Aliyev becoming President of Azerbaijan after the death of his father Heydar Aliyev, and theories about the children of other leaders in Central Asia also being groomed for succession. [2] The participation of Akayev's son and daughter in the 2005 Kyrgyz parliamentary elections boosted fears of dynastic succession being used in Kyrgyzstan as well, and may have contributed to the anti-Akayev climate that led to his overthrow.

Economic, political, national, military, and social problems have all been factors in separatism in the Post-Soviet space. In many cases, problems due to factors such as ethnic divisions existed before the fall of the Soviet Union, and upon the fall of the union were brought into the open.[16] Such territories and resulting military conflicts have so far been:

Civil wars unrelated to separatist movements have occurred twice in the region:

Since 2003, a number of (largely) peaceful "colour revolutions" have happened in some post-Soviet states after disputed elections, with popular protests bringing into power the former opposition.

There is a significant Russophone population in most of the post-Soviet states, whose political position as an ethnic minority varies from country to country.[23] While Belarus, Kazakhstan and Kyrgyzstan, in addition to Russia, have kept Russian as an official language, the language lost its status in other post-Soviet states after the end of the Soviet Union. It maintains semi-official status in all CIS member states, because it is the organisation's official working language, but in the three Baltic States, the Russian language is not recognized in any official capacity. Georgia, since its independence from the CIS in 2009, has begun operating its government almost exclusively in the Georgian language.

While under the Soviet system religious intellectual life was eliminated, traditions continued to survive. After the dissolution of the Soviet Union, Islamic movements have emerged alongside ethnic and secular ones. Vitaly Naumkin gives the following assessment: "Throughout the time of change, Islam has served as a symbol of identity, a force for mobilization, and a pressure for democracy. This is one of the few social disasters that the church has survived, in which it was not the cause. But if successful politically, it faces economic challenges beyond its grasp."[24]

Ever since the dissolution of the Soviet Union a certain number of people have expressed a longing for the Soviet regime and its values. The level of post-Soviet nostalgia varies across the former republics. Russia as well as the Caspian Sea countries are inclined to be pro-Soviet, whereas the Baltic States have traditionally been the least nostalgic towards the Soviet Union.[25] Nevertheless, there are certain groups of people even in the Baltic States who on their daily basis continue to blend the Soviet and post-Soviet experience.[26]